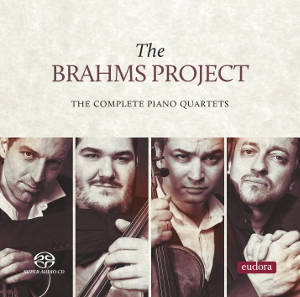 
Four of the foremost Spanish musicians of their generation join forces in exploring three of German Romanticism’s highest peaks. Brahms’s piano quartets are cornerstones of the chamber music repertoire and works of symphonic scope, and the Brahms Project offer the listener a very personal and intense rendition of these Brahms masterpieces.

The Brahms Project comprises four Spanish musicians of similar age with an ability, skill and affinity for the chamber music of Brahms, especially his works from the Late Romantic period. Enrique Bagaría (piano), Josep Colomé (violin), Joaquín Riquelme (violist in the Berlin Philharmonic) and cellist David Apellániz offered some telling comments about their views on this venture in the booklet of this new SACD:-

"...stay within those Classical boundaries when you play his music, but at the same time perform it with a Romantic sense of emotion, with all the light and shade of this style" (Enrique Bagaría).

"There's a natural dialogue between the four of us, and when you add up our personalities as soloists and our background in chamber music, together we bring a real depth of music experience to this project" (Joaquín Riquelme).

"We all have our own musical personalities; from the sum of our parts we create a new version, unique and different from else's. There's a marked emotional character to our interpretation - it's more visceral than many, but we always work with surgical precision as far as the sound is concerned" (David Apellániz).

Put together, these comments give listeners a good idea of what splendid performances of Brahms's Complete Piano Quartets they are going to hear, made even more effective and attractive by SACD's DSD recording and acoustic, which capture all the sounds of a real performance.

For some unknown reason, it seems to be that commercially there are more recordings of the Brahms String Quartets than the three Piano Quartets. At the time of writing, as reported by HRaudio.net, there are currently only a few single piano quartets listed, but now Eudora has supplied the complete three on 2 SACDs in a slim double case. Disc 1 (Total Time: 71:32) holds Piano Quartet No. 1 in G min, op. 25 (1861) and Piano Quartet No. 3 in C min, op. 60 (1855-1875), while Piano Quartet No. 2 in A major in op. 26 (1861-1865) rests in SACD 2 (Total Time:49:02). As one might have supposed from such devoted ensembles, the ensemble play all repeats (a remaining Classical device which Brahms occasionally used).

The booklet is in English and Spanish, fairly short but covering the most important historical features of Brahms's emotions during time he was writing the Piano Quartets. There are also quite complete accounts of each player's career up till now.

The recordings were made in 2016 at Sala Mozart in Auditorio de Zaragoza, Zaragoza. This is a large modern hall, a somewhat elongated octagon, with seating behind the stage as well as frontally. It is remarkable that a small ensemble, on the front of the stage with piano at the back and strings at the front, could be persuaded by the recording engineer to sound so much more intimate. There is a clear halo of ambience which forms a large room which might be used for chamber concerts - such as Mozart would have had. Without loosing any of its register, the piano sounds marvellous, all the timbres collected by the DSD256 and balanced so that even at the loudest sound required by Brahms, the recording technician never lets the piano overcome the strings. The strings themselves have distinct characters, often resinous and rich. An exemplary recording for a Piano Quartet!

Start with the virile intensity, forcefulness and drama of Quartet 3 where Brahms's 'Storm und Drang', caused by his inability to marry Clara Schumann. Continue with the incorporation of Schubert's music growing in Vienna; while Brahms enjoyed his work there, giving us light-hearted dance tunes, or offering deep emotions in the Poco Adagio of Quartet 2, a lush Nachtstück that just makes Romance for us. These three Piano Quartets of The Brahms Project offer a world of music to be explored so I heartily suggest you acquire the double SACD and enjoy the best of Late Romantics.

Brahms’ chamber music belongs to the ultimate in its genre. Top musicians and those who consider themselves as such, have had and will continue to have a go at it. If done well it gives them the seal of universal approval. A cherished goal for all. We have the monumental recordings by the Beaux Arts, which for many still constitute the absolute summit. But there are others, too, who’d like to join the exclusive club of Brahms Master Players. Like, in the present case, the members of the ‘Brahms Project’. Competition is fierce. Take, for instance, another ad hoc combination, Ax, Stern, Laredo and Ma, released some decades ago on Sony Classical (RBCD S2K 45846). Thus far my favourite recording of the three Piano Quartets. Surely a hard nut to crack.

Comparing recordings, one notices that there are several approaches. There are those who insist on supreme precision and those who prefer combined emotion. The Spanish combination Enrique Bagaría (piano), Josep Colomé (violin), Joaquín Riquelme (viola) and David Apellániz (cello) belong, in my view, to the second group. It is, eventually, up to the listener to decide which one is their prevailing choice but, interestingly, the main contenders also give evidence of cultivating an individually shaped approach rather than striving for strict correctness. That doesn’t mean that players can play their individual game at will. The risk is losing cohesion and, in some case, causing problems of intonation between the strings. I firmly believe that the essence of a thorough and purposeful execution of Brahms’ chamber music lies in the individual contribution to a commonly shared emotion.

Adding, rather than diverting from John Miller’s fine review, I think that the players in the ‘Brahms Project’ do indeed cover the essence of the music, and in doing so, adequately highlighting the differences of the three piano quartets. May be not to the point of superseding my top choice, but altogether an admirably successful effort to show what is possible when soloists in their own right commit one’s self to a common achievement.

And, as already indicated by J.M., they have the not to be underestimated advantage over other available choices, notably the Beaux Arts Brahms: Piano Quartets - Beaux Arts Trio/Trampler, of a state of the art recording.

As mentioned in the reviews, the sound is exceptional, but the performances are also very good. While I prefer the Beaux Arts plus in Quartets 2 & 3, the Brahms Project breathe a great deal more life into the op. 25 Quartet, where the Beaux Arts seem a bit tepid. This is a fine group of musicians.

As noted, this is a DSD recording, but the note fails to mention that it was recorded at DSD 256. Of course, it has been down-rezzed for the SACD. Maybe the notes should mention the resolution at which the recording is made for both PCM and DSD, where known. Some recordings are made with DXD and most, although not all, are edited using DXD, and some are edited in DXD only for the stereo channel, but not the multi-channel track. That information could also be useful.

Nice as it would be to know that stuff I'd happily settle for the ability to buy the disc. None of my regular US or UK suppliers has seen or heard hide nor hair of it yet.

Available as download, but apparently out as SACD also, subject to limited availability.

just ordered from the label itself for a very decent price (inc. postage). Looking forward to this.