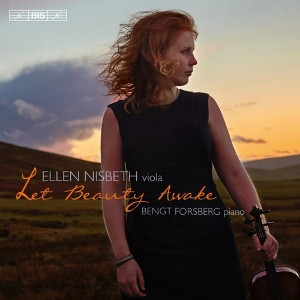 
Despite her youth, Ellen Nisbeth has received acclaim both in her native Sweden and abroad and is one of the Rising Stars selected by the European Concert Hall Organisation (ECHO) for the 2017/2018 season. A former student of London's Royal College of Music, she hails from a family of Scottish origin and feels a particular affinity for the landscapes of Scotland, and for the Scottish author Robert Louis Stevenson.

For her first recital disc Ellen Nisbeth has devised an all-British programme which includes her own transcriptions of selected songs from Songs of Travel–Ralph Vaughan Williams's settings of poems by Stevenson. The songs intersperse the remainder of the programme, and one of them –Let Beauty Awake–has also lent its title to the entire disc. Together with the eminent pianist and chamber musician Bengt Forsberg, Nisbeth goes on to perform the impassioned Viola Sonata composed in 1919 by Rebecca Clarke–a well-known piece among viola-players, but deserving of a wider audience.

The centrepiece of this amply filled disc is Benjamin Britten’s Third Suite for Cello, transcribed for viola by Ellen Nisbeth herself – composed for Mstislav Rostropovich, the suite is based on Russian themes which Britten only presents in full towards the end of the substantial work. The same method is used in Lachrymae, here in the original version for viola and piano, where John Dowland’s song If my complaints could passions move is presented in full at the very end of the piece.

The viola player Ellen Nisbeth is new to me, and what a revelation she is! I wholeheartedly support her being selected for an ECHO Klassik. Together with her star piano partner, Bengt Forsberg, whome many of us know so well from his brilliant support to artists like Anne Sofie von Otter (A Summer's Day - von Otter / Forsberg), Nisbeth brings us an impressive recital of British composers of which only two works are originals, the rest being in the form of transcriptions.

The viola is not an easy instrument and solo works are scarce. Not only is it difficult to play, it’s also large and heavy on the arms. And in my world there are only few who can play it well, especially if judged by those, like me, who are sensitive to pitch. Tabea Zimmermann tops my list, to which I now have added Ellen Nisbeth. What a beautiful tone and what a rare purity does she draw from her Dom Nicolò Amati viola from 1714. It has to be heard to be believed. And that is what I urge all lovers of the viola (and British music) to do. Not only is Nisbeth a confirmed viola player, in order to compensate the shortfall of suitable material, she also takes full and most successfully responsibility for the transcriptions.

What else should I say? Extensive information (Philip Borg-Wheeler 2016) is contained in the booklet, as well as Nisbeth’s own, very personal feelings about the music she plays, which, I feel, blends in so marvelously well with the time of the year: late summer in the Northern hemisphere.

Let Beauty awake? It has, by all means!