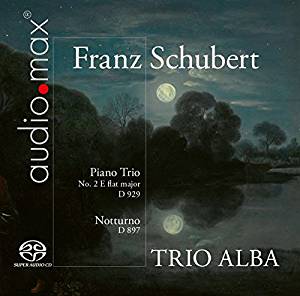 
Trio Alba with a new audiophile recording of Schubert’s Piano Trio in E flat major
One cannot get too much of certain good musical things. One of these things is certainly Franz Schubert’s magnificent Piano Trio in E flat major D. 929, which is one reason why this new recording by the Trio Alba is very much welcome. The Notturno D. 897 composed at about the same time as the trio and forming the perfect conclusion to this CD may have been a discarded slow movement from another trio.

It was not until the end of his short life that Schubert found his way to the piano trio. His two great contributions to this genre represent the culmination of the whole of his compositional mastery. During the course of the gigantically dimensioned E flat major trio he successfully forms a cyclical design attesting to razor-sharp discernment and phenomenal structuring talent. The work was first performed during one of the last “Schubertiade” private concerts held as a benefit event for Schubert. The composer did not live to read the rave review in the Allgemeine Musikalische Zeitung of Leipzig.

The slow movement holds a surprise in store: the melody, initially elegiac but later going over into a dramatic mode, is from a Swedish folk song(!) that Schubert had heard during a performance by the Swedish tenor Isak Albert Berg in Vienna. The broad intervals are characteristic of the song, and its repeated “farväl – farewell” octaves lend the movement a very special touch. Schubert’s contrapuntal mastery may also be admired in the scherzando: canonic concentration in alternating instrumentations astonishes even the seasoned listener.

The musicians of the Trio Alba met while studying together in Graz and ever since then have regularly concertized at leading festivals throughout the world. The ensemble has a very special relationship with Schubert’s E flat major trio: “If you see the sun setting” is the first line of the Swedish folk song in the second movement – which inspires even more joyful anticipation of the dawn, “alba” in Italian!

A very welcome addition to the catalogue. There are surprisingly few accounts of this marvellous work on hi-res media (including this one, they can be counted with one hand) and this has a wonderful variant that must surely appeal to all Schubertians: the first version of the finale, in which some 5 minutes of music is restored - more on this later.

This is Trio Alba's third disc for MDG (and their second SACD) and just as in their disc of Mendelssohn (Mendelssohn: Piano Trios - Trio Alba), they remain steadfastly true to their collegiate approach to music making with a nod towards HIP practices. Scrupulous observers of the dynamic and phrasing markings, the Trio Alba also bring a iridescent glow to these performances. One slightly unusual performance practice the violinist Livia Sellin and cellist Philipp Comploi indulge in is the spreading of their chords with more than two notes in a part (not too unlike the way one might expect to hear this happen in solo Bach); this is mainly heard in the first movement. This is usually to soften such chords in the music and is in keeping with their "vibrato-lite" approach, reserving this technique so that it becomes a genuinely expressive feature. Perhaps most impressive of all is the piano playing of Chengcheng Zhao, who never dominates the textures despite some fairly dense textures - the pianissimo often heard is a delight too seldom heard in this repertoire. The first movement also demonstrates that the Trio Alba are not afraid to apply rubato, sometimes with the flow of the music and at others to get the attention of the listener.

The second movement, taken reasonably but not too briskly, is given some textbook examples of how one can play an expressive melodic line with varying amounts of vibrato; bow speed and pressure are also applied and this makes for a very interesting rendition. The introduction of the violin leads to some delightful "hiccups" in the playing that still manages to maintain its natural flow. The towering climaxes have plenty of space for the strings to breathe because of Zhao's sensitive balancing; we hear the repeated chords but these are never in danger of overwhelming her fellow protagonists. The pizzicato contributions are just as delicately balanced and spices the aural picture delightfully. Equally as delightful is the pace, phrasing and balances achieved in the third Scherzando movement; this is playing that drips with aural honey without ever cloying, even in the more insistent Trio section, where the Trio Alba still find plenty of space around Schubert's chordal writing.

The finale is one of the most difficult pieces in the piano trio repertoire, for after all the demands made in the first three movements, Schubert seemingly redoubles these in a movement that was then unprecedented in length for these forces, filling it with virtuoso passagework that must be subservient to the melodic interest elsewhere. The Trio Alba rise to the challenge with consummate success, retaining the characteristics of performance that made their rendition of the earlier movements so winning. The hundred or so bars excised by Schubert contain some remarkable passages that further combine the song heard in the slow movement with the main ideas of the finale. The sheer clarity and marvellous balance of the Trio Alba, mean that this is as sympathetic an account as one could imagine for this first version and must surely be in demand by all devotees of Schubert. Was Schubert right to wield his editorial pen so drastically? Perhaps. The passages excised vividly call to mind Schubert's final symphony and now heard, it would be a matter of some regret to these ears if these were lost; there are some dreamlike bars that are hauntingly "odd" and make the coda so more hard fought. Once the "normal" final is rejoined, the journey continues triumphantly to the coda which is one of the best executed on disc - all parts are heard and phrased so that what is usually only seen on paper is heard. A wonderful experience which repays repeated listening.

As if the performance of Schubert's great piano trio were not enough, we then are calmed by the extraordinary "Notturno". Once again, Chengcheng Zhao's pianissimo playing is a delight, not just in itself but because of the expressive freedom it grants Livia Sellin & Philipp Comploi. The pace adopted manages, with rubato, to deliver (to slightly misquote a composition title of Charlotte Bray) "the speed of stillness". The phrasing is as delightful as the music itself and is a further 9 minutes of Elysium.

The MDG recording is a perfect complement to the playing and as in all the best recordings, the walls and all thoughts of the artists not being present in the room vanish.

My take from your review is that they play the excised passage and that this passage is normally not recorded or played. Is that correct? I have the Eisenstadt Trio recording and assume it doesn't include that passage. Not that that would necessarily prevent me from obtaining this recording...I will probably get this regardless.

That's correct; the others on SACD (so far) don't contain this extra passage.