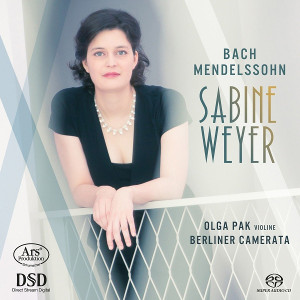 Two of Bach’s best known concerti for harpsichord and an exotic masterpiece of Mendelssohn are paired on this latest disc from ARS Produktion. Not just a well-chosen combination, but also a clear tribute to the fact that we owe it to Mendelssohn that Bach’s oeuvre was revived and that his St. Mathew Passion had been given back to public interest.

Bach’s concerti for harpsichord are mostly reworked scores from an earlier date, composed for other solo instruments, some of which have now gone lost. The two here, no’s 4 and 5, seem to be ‘originals’ or, in any case, best suited for the harpsichord. Given its popularity, there are numerous versions on record, also with forte-piano and concert grand. Sabine Weyer, one of today’s foremost pianists from Luxemburg, also opted for the piano version, for which she has chosen a fine Bechstein.

Mendelssohn’s double concerto for violin and piano dates from 1823, when young Felix was only 14 years old. It was meant to be used and played in private, but was nonetheless, with added wind instruments and timpani, given a public performance in Berlin. And that was it. Not published nor played again during Mendelssohn’s life time, it resurfaced, according to Sabine Weyer’s liner notes, in 1957, though others believe it was in the early 1960s. Whatever the case, it wasn’t until the very end of the 20th century (1999) that a first critical modern edition with strings became widely available.

After its rediscovery in Berlin, many recordings followed, some of them of high musical quality, like for instance Ronald Brautigam and Isabelle van Keulen in 1995 (BIS, RBCD) and, more recently in 2016, Kristian Bezuidenhout with Gottfried von der Goltz (Harmonia Mundi, RBCD) both played on a forte-piano.

For direct comparison I selected other piano versions like Angela Hewitt / Australian Chamber Orchestra for Bach BWV 1055 (Hyperion SACD) and Stanisław Drzewiecki / Warzawscy Soliści ‘Concerto Avenna’ for Bach BWV 1056 (Blüthner Records SACD). As for Mendelssohn I took out Thomas Albertus Irnberger / Edoardo Torbianelli / Israel Chamber Orchestra (Gramola SACD), leaving aside the other (much acclaimed) high resolution BIS recording for the simple reason that I don’t have it. The results were pretty revealing.

Ms. Hewitt needs no further introduction. Her interpretation of Bach is spotless. The orchestral support beyond any wished for expectation. But… I miss the daring adventure. Tempi are middle of the road and so is the recording. Drzewitctky has a much more attractive piano sound and Jerzy Maksymiuk provides a more than attentive support. I felt much empathy for these forces, but the piano is a little too much in focus (which does not surprise since this recording was made to promote Blüthner pianos!). In Mendelssohn, Irnbergers violin is spot on and his co-soloist, Torbianelli, plays beautifully on the Bösendorfer forte-piano.

So, what about the combination Weyer, Pak, Berliner Camerata in these works? Are they clearly better? No. Why do I like ‘m nonetheless so much? Because theirs’s may not be in every aspect perfect, but they are so infectiously spontaneous, so real, so natural that one cannot but accept with pleasure the small imperfections as being part of a real time feeling. Seen in that light Hewitt is mundanely superb and Irnberger / Torbianelly too equable precise. There lies your choice: the best or the liveliest, and, given the size of the one to a part accompaniment (at least for Bach; for Mendelssohn I'm not 100 per cent sure and the booklet does not give any hints), the most intimate reading. I opt for the latter variety. The more so, because of Manfred Schumacher's close and realistic recording, with a well-chosen amount of surround, making the listener fully part of the happening; like it’s done right there on the spot in your own listening room. How much more does one want to participate in?

I’ve been playing this disc over and over again and one might say that it has become my disc of the summer. It’s optimistically joyful and I can recommend it without the slightest hesitation as a compelling medicine for bolstering up your mood in preparation for the rainy days of autumn.