Hui Zhu, I think that the 3rd Vol. (7-9) will contain a new EBS remastering only for symphony 7. Unlike symphonies 8&9, which were remastered only a few years ago, the 7th ... 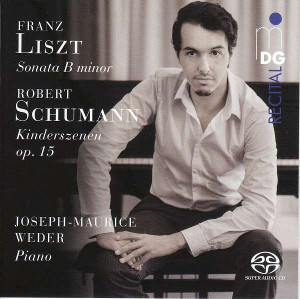 
Contrasting Performances
A debut could not contain two greater contrasts: Liszt’s inscrutable Sonata in B minor and Schumann’s enchanting Kinderszenen in performances by the young Swiss pianist Joseph-Maurice Weder. A bold program – since recordings of these two works are not in short supply. Weder nonetheless repeatedly discovers new things in these frequently performed works – with important support from the legendary “Manfred Bürki” Steinway concert grand piano of 1901, an instrument with a brilliant treble shining its supernatural light over the profound bass.

Creative Adventure
The mysterious beginning of Liszt’s sonata immediately attracts the listener’s attention, and when bass repetitions rumble after the short and just as enigmatic introduction, a spine-tingling experience is guaranteed. The highly expressive middle section is magnificent and offers Liszt and Weder rich musical sources on which to draw. The fact that the great virtuoso Liszt has his sonata conclude not with rushing cascades but in pianissimo with a reminiscence of the first measure is what makes this work so splendid – a compelling circle and one that Weder convincingly traces.

Childhood Reminiscences
Everything extroverted is entirely foreign to Schumann’s Kinderszenen. The thirteen little character pieces, certainly reminiscences of his much earlier days rather than observations situated in the present, nonetheless have what it takes. And within the briefest space Weder captivatingly demonstrates that what supposedly matters little to children has just as great an emotional significance as all of Liszt’s grandeur. The famous “Träumerei” thus is able without sentiment to become a genuine high point on this Super Audio CD.

Cultural Ambassador
Even though Joseph-Maurice Weder is not yet thirty years old, he can already look back on a distinguished career. The winner of many prizes, he represented his native Switzerland as the “Swiss
Ambassador” in Great Britain in 2013 with concerts at London’s prestigious Wigmore Hall and in Edinburgh, Belfast, and Cardiff. He has also appeared as a guest at Berlin’s Philharmonic Hall and at Vienna’s Musikverein. His MDG debut of course has been produced with high-resolution SACD technology, finely balanced and as always in three dimensions – for true-to-life listening pleasure in the home.

The easiest way to review this disc is by repeating all that’s said in the introduction above, because most of it is true. But that would, of course, not do. Neither would I repeat all that I’ve said about Liszt’s sonata in another review: Liszt: Dedication - Angatschewa . Joseph-Maurice Weder deserves personalized treatment.

Of late several young pianists have come my way for reviewing and I must say that I’m most impressed by so many talented youngsters. In fact it fills me with joy to know that for years to come there will be no shortage on our podia. Neither in good old Europe nor elsewhere. And yes, Joseph-Maurice Weder is one of them.

Presenting one’s self in a debut recording with Liszt’s Piano Sonata in B minor, is like doing a public exam. It takes a lot of courage, but if successful it gives a lot of pride, too. In his effort Weder has two formidable supporters at his side: the ‘Manfred Bürki’ Steinway concert grand and the MDG sound engineers. Although I do not have their famous 2+2+2 set up, played in 5.1 surround gave me sufficient room to appreciate the highs and the lows of the piano beast.

The stage is set and the listening can begin. Like Philips did for Brendel did MDG for Weder, recording the sonata without subdividing the four movements, making it difficult to compare parts with other recordings. But as it happened, I got hooked right from the beginning and soon became aware that Weder’s reading makes such a compelling statement ‘as is’ that comparison with anyone else would only distract from this unexpected experience. Weder has all the faculties needed for this unique sonata: The power, the technique, the insight, and above all the affectionate understanding and subtle patience required for laying bare the complex and varying moods of a composer at the height of his creative life.

Despite of his fast and powerful ‘energico’, Weder’s interpretation takes up more time than many other recordings do. This is not a rushed powerhouse reading; it’s much more, it’s a perfect proof of highly developed maturity - rare such an early age in a career - steering clear from outright ‘showing off’. I’d say: mission accomplished!

With Schumann’s following 13 ‘Kinderszenen’, Joseph-Maurice Weder demonstrates the sensitive and contemplative nature of his talent. This time I wanted to compare with the reading of Maria Joao Pires at a similarly young age (recorded by Erato in 1984), but the same thing happened. The sheer magic of Weder’s playing kept me spellbound till the end, convincing me once again that he is an incomparable, natural talent in his own right. I’m sure he’ll be around and appreciated for many more creative years.