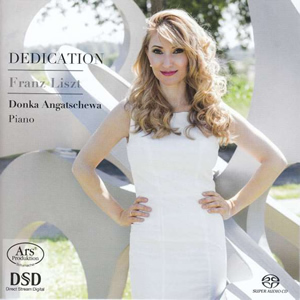 Liszt: Sonata, Consolation No. 3, Sonetto 104 del Petrarca and others

Liszt is a complex composer with many faces: The virtuoso; the romantic; the mystic; the poet, the sentimentalist, the revolutionary and, not to be neglected in his time, the transcriber for private use (i.a. Beethoven’s symphonies and opera parts). That’s probably why there is no universal appreciation for all he has done. Some like his fabulous and virtuoso piano technique, discarded by others as merely for the ‘Bühne’; some revel in his Symphonic Poems and Hungarian Rhapsodies, which have, on the other hand, been described by contemporaries as loud and bombastic. Well, a complex figure can’t please everyone all the time. But as far as his piano sonata is concerned there seems to be little or no discordance. Is this the real Liszt? I believe so. It’s unique.

Many of the ‘Great’ have tackled this sonata. Recordings by Richter, Gilels, Arrau, Brendel and Pollini (to name but a few from the old guard) are still cherished by audiophiles, even though only available in RBCD (disregarding the sound wise mediocre copy from a Richter broadcast by Praga Digitals and the not so very cheap hi-res remastered Arrau version by Universal Japan). But many younger and eager pianists have since been knocking at the door with a variety of faithfully executed or more personalized interpretations. In this connection I refer to John Broggio’s excellent ‘food for thought’ review of Polina Leschenko’s reading: Liszt: Sonata etc - Polina Leschenko, asking myself the question: Do pianists with a Slavic background have a special mind set for Liszt? Donka Angatschewa comes from Bulgaria and listening to her I felt a similar musical character shining through in her typical, own reading. Like Broggio, I think there is nothing wrong in giving expression to personal feelings, whether explosive or emotional, as long as the essence remains intact. Would Liszt not have done the same?

Now that she has made Vienna her hometown, I decided to take out Brendel for comparison (second recording, Philips 1981). A bold move? Yes, but not as one would prejudice. Different? Of course.

Much has been said and written about this sonata. Liszt refrained from suggesting a programme. Even the idea of a calling it a Fantasy was rejected. Brendel has analysed it into the minutest detail (themes, characters, form and structure), making reference to the Faust and Mephistopheles struggle, like elsewhere in Liszt’s oeuvre. It is the basis on which he approaches and plays the sonata.

His ‘energico’ (first movement) is, indeed, full of energy, drawing a massive amount of power from his grand, and, for the better part, nervously so. He lives inside the sonata, going, as the sonata develops, back and forth between radically varying moods, thereby carefully following the composer’s instructions, but nonetheless with his own analysis in mind. Angatschewa, who did not give a personal view in the liner notes, seems to be addressing the sonata ‘as is’. Her first movement is more assertive, like she wants to take full command of Liszt’s revolutionary statements and internal struggles. With her fabulous technique she’s able to exploit the score to its fullest extent with an open mind, leaving me with the impression of not willing to get entangled in assumed contrasts, but interpreting it as and how it transpires to her. A matter of conception rather than a matter of qualitative difference, I would say.

I cannot put aside the presumption that the programme in this sonata pertains to Liszt’s own life. His contradicting feelings ranging from hot-headed revolutionary ideas to loving tenderness and the ultimate desire to put things to rest in the final, short movement. Brendel’s reading is for me, notwithstanding his personal conception, the one that best lives up to such an idea, but Angatschewa impresses with an honest interpretation that does not turn pale in musical terms.

Though the Sonata clearly is the main item, the recital includes some other aspects of Liszt’s oeuvre, like a delightfully played ‘Consolation’, a kind of nocturne, initially marked as Lento Placido, which relates to his friendship with Chopin, Sonetto 104 del Petrarca, part of Liszt’s extensive travel mémoires ‘Les Années de Pèllerinage’, played with a judiciously pensive approach, finally two virtuoso pieces of the previous memories presented with gusto. All in all in nice palette of Franz Liszt of which a selection can be made according to the listeners taste.

This is not the first recording Angatschewa has made for ARS-Produktion and it confirms that she is a remarkable soloist. There is, however, one thing I appreciate less, and that concerns some photographs in the extensive liner notes (42 pages), giving the impression as though ‘looks’ are more important than ‘spirit’. That said, it has nothing to do with her spirited playing, which is admirable throughout. Another young talent, this time with Bulgarian roots and of which her homeland can rightly be proud. Heinz Aeschlimann, a Swiss metal sculptor, to whom this recital is dedicated, has got it right that she could do it.

Although she does not altogether erase my preference for the now retired Vienna Master, Donka Angatschewa has the enormous advantage of a superbly recorded sound stage, with ample sonority and surround feeling. The more so because, unlike using the standard grand in ARS-Produktion’s usual recording venue of the Emanuelskirche in Wuppertal, now renamed Kulturzentrum Wuppertal, she plays here a beautiful Bösendorfer, adding such a warmth and generosity to her playing. I greatly enjoyed my listening sessions, spoiled only by having to play Brendel every time from the beginning to compare a fragment towards the end, as Philips put the whole sonata in one track! 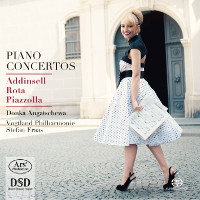 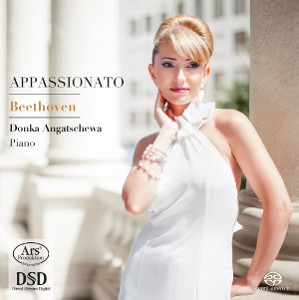