Being a subscriber to Presto in the UK I first heard snippets of this recording from Presto's weekly newsletter . My first reaction was.........not another New world ! ... 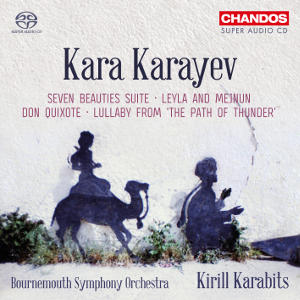 
This set of idiomatically lyrical, rhythmic, and colourful interpretations by the Bournemouth Symphony Orchestra and its Chief Conductor, Kirill Karabits, who appears on Chandos for the first time, marks the start of a new series dedicated to lesserknown composers from former Soviet Union countries.

The Azerbaijani composer, teacher, folklore authority, and artistic dynamo Kara Karayev was at the forefront of his country’s musical life for almost four decades after the end of the Second World War, recognised as among the significant composers of the post-war Soviet Union. His compositions draw their material from his nation’s folk music as well as his personal voice, which emanated from Shostakovich and Prokofiev, Tchaikovsky’s ballets, and the fantasy operas of Rimsky-Korsakov.

At the dawn of Karayev’s centenary, Kirill Karabits pays homage to the composer by exploring some of his best-known works: the Persian-inspired orchestral suite The Seven Beauties (later expanded into a full-length ballet), a movement from the ballet The Path of Thunder, the exuberant Don Quixote (drawing on music for a film), as well as the symphonic poem Leyla and Mejnun, after a poem which Byron called ‘the Romeo and Juliet of the East’.

This was the new contractual relationship between Chandos and the Bournemouth Symphony Orchestra that I referred you to earlier on another thread.

Karabits is good at digging out obscure music like this and presenting it to new audiences, we get this sort of thing quite regularly down at the Lighthouse Concert Hall. Believe it or not we sold out 2500 seats for a Bruckner symphony under his baton last season (in Poole). Last night at a RAH Prom in London that I attended the RCO under Daniel Gatti could not fill the hall - with about 75% attendance - for Bruckner's 9th. Puts it in perspective. That's the problem with London audiences, anything requiring a modicum of concentration and insight goes way beyond them. They do love their pop music 'though ;-)

Last night's performance by the way was beyond superb a treat even for this jaded old critic! For those that have access to the BBC i-Player, try not miss it.

OK, John, I've put it on my wish list and will order as soon as it appears on Presto.

This is what I have learned so far Bill. Karabits is a native of Kiev and has introduced us to many fringe composers - including his late father - from a region that otherwise would not have registered "in the west".

Well, John, congratulations on what deserves to be a very successful start to the new relationship with Chandos. Commenting on the musical aspects of a disc when one has absolutely no standard of comparison is hard, but put simply this is some of the most beautiful music I've heard in years. The liner notes, by Andrew Burn say this: "while indebted to the idioms of folk music, his personal voice emanates from Shostakovich and Prokofiev, as well Tchaikovsky's ballets and the fantasy operas of Rimsky-Korsakov." Not knowing a thing about Azerbaijani folk music I can't comment upon the former assertion, but among the four composers listed Rimsky and Prokofiev at his most lyrical are the real source of any "emanations". Tchaikovsky ballets, certainly, here and there, but Shostakovich? Maybe in other parts of Karayev's oeuvre, but not much in these pieces.

The sound is very fine, perhaps a little bass shy, but again since I have zero previous exposure to these works how would I know? I hope Karabits and Chandos have many more such interesting discoveries in the pipeline.

Hi Bill. That's wonderful, so glad you liked the new disc. Actually you are ahead of me as I was expecting to pick up a copy at Wednesday evening's season opening concert but the Marketing Manager had mislaid the key to the storage cupboard! He promised to have it ready for me this week.

That's the way it is in our part of the world with none of the old fashioned business efficiency nonsense to interfere with the usual smooth running of our orchestra.

To me these Karayev works sound like recycled Khachaturian. But then, they both came from roughly the same part of the world. If you like orientalism, movie music and occasional big trombone writing, you will warm to this. The Chandos recording is Ok, but there is undeniable sibilance in parts in the stereo track

Certainly an East meets West kind of sound that has a certain appeal perhaps but for me the music lacks a clear voice of its own. The Chandos recording in stereo is a too broad brushed with a disappointingly narrow sound-stage and a lack of intimacy through a sparsity of inner detail perhaps because of unfamiliarity with the orchestra and the Concert Hall.

Hi John, I'm sorry to hear this didn't meet your expectations. Hopefully there will be things that appeal to you more somewhere down the line. For me there's always room for music that's just beautiful and can be played for an hour's relaxation at the end of the day when I don't want to think about it too much or be challenged to contemplate the big issues of life. This fits that requirement quite well. As for the sound, well you know the orchestra and the hall so I'll defer to your judgment to the extent that you stereo guys and we mc guys aren't really listening to the same recording anyway, and yes, it's not a typical Chandos sound, even in mc. What I described as maybe a little bass shy might better be described as lovely but not very impactful (like the music itself). In any event as my shelves buckle under the weight and new recordings continue to arrive from the UK every week I'm much happier to have this and other off the beaten track repertoire than the nth version of one or another Mahler symphony. Here's a link to an MWI review by Dan Morgan (with whom I rarely agree and who I think goes over the top here) http://www.musicweb-international.com/classrev/2017/Oct/Karayev_beauties_CHSA5203.htm.

I wasn't sure what to expect from this composer as his name was completely new to me. Karabits had not exposed his Bournemouth audience to any of these works to test the water so to speak even though he is apt to spring a few left field choices on us each season. The release of this disc came as a genuine surprise.

I agree with you about the immediate appeal of the music but it betrays overly strong influences of other composers such as Mahler and Tchaikovsky.

To my utter astonishment Music Web International have marked this up as possibly their candidate for best recording of the year... "it's that good!"

Is this still Planet Earth?

Since this one is due, at least in part, to your own good efforts maybe you should try to forget it's the kind of music that bores you to tears and just bask in the glow of success. The critical acclaim has got to enhance the prospects for future sacds from your orchestra. And I'm grateful.