During the mid 18th century, there was a popular genre of painting called the capriccio. It featured imaginary topographical scenes in which various elements, largely architectural, were brought together as never possible in real life. They offered dazzling views and set the imagination in a spin. Hugo von Hofmannsthal and Richard Strauss’s Der Rosenkavalier is the operatic equivalent, for in its re-creation of ‘the old Vienna under the Empress Maria Theresia’ – the very period in which the genre of the capriccio flourished – it juxtaposes seemingly distinct elements, such as 18th-century social conventions, 19th-century waltzes and 20th-century thinking.

Following Hofmannsthal’s lead, Strauss constantly switches between the lyrically symphonic and the downright bawdy in the opera.

Five Stars by bachtrack.com: "Marc Albrecht, once again presented his platinum Strauss credentials…The Netherlands Philharmonic, playing with dreamlike ease, tugged at the heart with airborne woodwinds and shapely violin lines, stopping a hair’s breadth away from full extravagance. This introspective restraint created a tenseness throughout, rendering the emotional climaxes all the more powerful."

A valuable document of what was clearly a very fine production.

In this set, taken from live performances at the Dutch National Opera, Marc Albrecht gifts us a wonderful performance of one of Richard Strauss' most magical scores. Right from the beginning, the playing of the Netherlands Philharmonic Orchestra (whether in the pit or on stage in Act III) is nothing short of brilliant; there is scarcely a tonal blemish from them and the depth of sonority is a joy to the ears. Albrecht's pacing is inspired; more ecstatic than Karajan in faster music and more reposed than Kleiber in the climaxes of the great Trio, he delivers up what is arguably the best of both those conducting greats in this delightful score. For example, one is aware in Act II of the (perhaps unconscious) tribute Strauss gives to Schoenberg's Gurrelieder. It should also be said that Albrecht encourages the NPO to vividly characterise the music, something that audibly rubs off on to the singers.

In the singing department, both Karajan and Kleiber managed to assemble incredible casts that are not (attempted to be) replicated by DNO; Karajan's recording managed to employ internationally recognised singers for almost all of the solo parts, here an ensemble approach is utilised that would be commonly found in most good opera houses. The relatively minor characters are generally well sung, particular highlights being Yosep Kang's beautiful Italian tenor and Scott Wilde's suitably incredulous Kommissar. The only potential complaint is that one or two of these minor characters are not as well upholstered vocally as for Karajan - this is not anything that should prevent anyone from purchasing this set.

For the major roles, the picture is fortunately just as good. Camilla Nylund's Marschallin is glorious and regal in equal measure and Hanna-Elisabeth Müller's Sophie is youthfully radiant. Peter Rose audibly enjoys himself as Baron Ochs throughout; the transitions between boastful bluster, ingratiation when attempting to seduce and then the outright confusion in Act III is very well done indeed. Paula Murrihy's Octavian is fine on its own terms but occasionally her voice sounds older than Nylund's Marschallin which is a little confusing at first to the ears; some may consider it a stumbling block but after a while this listener adjusted without too much trouble.

The sound, recorded in-house by the Dutch National Opera, is wonderfully rich and clear. Remarkably little stage noise in the way of movement (of people or staging) although a few impromptu contributions do creep in (most notably with what sounds like empty bottles being knocked over as Octavian and Marschallin have breakfast in Act I) but this is exceptional and by no means the norm. The audience is impressively silent for the most part. At the end Act I, the quasi-Heldenleben epilogue is greeted with rapt silence; at the end of Act III, the audience waits until the final chord is sounded before erupting with (well deserved) cheers and applause. At the end of Act II though, there is an example of that curious opera house audience mindset of only respecting the notes sung and then immediately applauding over the final orchestral cadences that the composer took time and effort to write down!

The biggest let-down of this set is the lack of a libretto (with translations, the german text alone is provided as a pdf from a link provided in the booklet). However, for such a wonderfully played, generally very well sung performance in fine sound, one would not wish to deter interested listeners from exploring this set - just be forewarned if a translation is desired.

There is only one other complete recording of Der Rosenkavalier on hi-res audio: Strauss: Der Rosenkavalier - Kleiber. It's safe to say that the sound here is on an entirely higher plane (actually, several planes higher); Albrecht's conducting is slightly less volatile & ecstatic - some will prefer that, others may miss the edge-of-the-seat thrills with which Kleiber imbued the score; as a result though, the orchestral playing of the NPO is more refined and sharply characterised; the singers are "bigger names" for Kleiber but there are few weak links here. On balance and certainly for repeated listening, the limitations of the Orfeo remastering are far greater and wearing than any perceived shortcomings here.

By any standards this is a superb production of the Dutch National Opera ably and brilliantly supported by The Netherlands Philharmonic. The soloists are not household names but collectively deliver the passion and panache required of Richard Strauss's opera. I have no criticism to offer, this live recording stretching over 3 discs recreates the magical atmosphere of the opera house reinforced by the inclusion of audience applause.

A wonderful night out, in so to speak. Thoroughly recommended especially as we are usually offered only the highlights on disc. John's review is spot on. 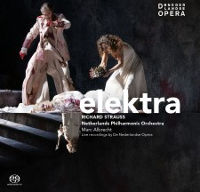 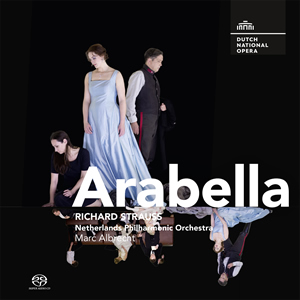