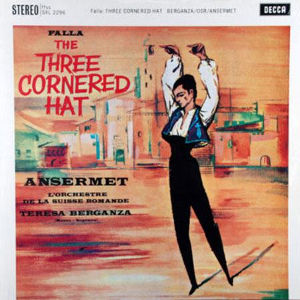 
This timeless gem is performed by L'Orchestre de la Suisse Romande, conducted by Ernest Ansermet. This is a performance to be known as "one of the greats." The composition, Three-Cornered Hat, was premiered by Ansermet, and with its lively rhythms, subtle narratives, dynamic development and vivid contrast and tone colors, this version is a masterly performance that none other appears able to exceed. The performance illustrates the ethnic taste that is rich in wild beauty in a truly vivid and dynamic way, while highlighting the lyricism of Falla's music in a sophisticated, uncompromising manner. The solo singing by the young Berganza is also worth a listen.