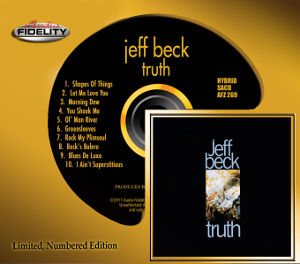 
Jeff Beck's debut solo LP was bound to be a great record with a band featuring talent like Rod Stewart on vocals, Ronnie Wood on guitar plus contributions from Jimmy Page, Nicky Hopkins, Aynsley Dunbar and Keith Moon. The 1968 album got off to a staggering start and peaked at number 15 on the Billboard 200. Astoundingly good for a band that had been utterly unknown in the U.S. just six months earlier

Truth was critically acclaimed for its daring, radical nature, elements of which would be appropriated by practically every metal band that followed. The recording is certainly regarded as a seminal work of heavy metal because of its use of blues toward a hard rock approach.

The combination of the wailing, heart-stoppingly dramatic vocalizing by Stewart, the thunderous rhythm section of Ron Wood's bass, Mickey Waller's drums, and Beck's blistering lead guitar, which sounds like his amp is turned up to 13 and ready to short out, was as groundbreaking and influential a record as the first Beatles, Rolling Stones, or Who albums.

There are lots of unexpected moments on this record: It opens with an oldie done in a new way - a cover of The Yardbirds 1966 hit "Shapes Of Things". Then their brilliant blues-rock cover of Howlin' Wolf's "You Shook Me"; Beck's speaker-to-speaker guitar slides and Rod's vocals are truly awesome and worth the price of admission on a version of Jerome Kern's "Ol' Man River" done as a slow electric blues; a brief plunge into folk territory with a solo acoustic guitar version of "Greensleeves"; the progressive blues of "Beck's Bolero"; the extended live "Blues Deluxe"; and "I Ain't Superstitious," a blazing reworking of another Willie Dixon song closes the album.

Who doesn't want to hear the Truth?

Mickie Most, for one. The struggle between Most, a hit-making producer-manager, and virtuoso rock guitarist Jeff Beck, his most stubborn client, impeded the progress of the first Jeff Beck Group and guaranteed that the raw energy of the band's live performances would never quite be captured in the recording studio.

The Jeff Beck Group were at the vanguard of British blues-rock from their first live appearances in spring 1967. Performances in the UK club circuit built up an enthusiastic following of blues fans, but Mickie Most didn't want to manage a blues band: he wanted to remake Jeff Beck into a mainstream pop entertainer. Their contest of wills—captured in documentary footage shot during the "Beck-Ola" recording sessions, where Most acidly chastises Beck for failing to show up at the studio during booked session time, and Beck blithely replies that he can't be expected to create music in the confines of four blank walls—robbed fans of a chance to hear what the band could have sounded like in the hands of a more supportive and imaginative producer.

Mickie Most couldn't read music or play an instrument; he relied on his instincts and a perspective shaped by recordings that had been successful circa 1964-66, which were already sounding dated. A year into the Jeff Beck Group's existence, those irreconcilable differences left Beck in the unfortunate position of heading into the studio to make an album that his manager would certainly hate.

Fortunately, it was the gifted Ken Scott, then an assistant engineer at Abbey Road studios, who would operate the board at the May 14-15 and May 25-26 sessions for "Truth". Scott likely used one of Abbey Road's customized 4-track machines to record the basic tracks and overdubs. Chief producer George Martin had acquired a 3M 8-track deck early in 1968, but was holding it back until technicians could perform modifications to his exacting standards. Studio practice at the time was to record basic parts onto three tracks, mix and "bounce" them to the remaining fourth track. An additional three new tracks could then be recorded onto the original tape. This seems to be the method used on "Let Me Love You", where the rhythm guitar, bass and drums are mixed together and panned left, and some generational loss of signal quality is detectable. But the opening song "Shapes of Things" is mixed quite differently and sounds as if all the instruments are in the same tape generation.

Ken Scott was unafraid of Jeff Beck's reliance on extreme guitar sounds and studio effects. Beck's use of distortion ("You Shook Me") and wah-wah pedal ("I Ain't Superstitious") are landmarks in the development of electric guitar tone. Scott accommodated the guitarist's excesses by isolating Beck's guitar amp ("stuffed in a closet") so that it wouldn't bleed into the drum tracks. He must have used one of the studio's best large-diaphragm microphones to capture Keith Moon's astonishing kettledrum performance on "Ol' Man River".

The rhythm section of Micky Waller, drums, and Ronnie Wood, bass guitar, distinguishes the band from many of the other blues-rock groups of the time. Waller was a jazz and Motown-influenced traditionalist, at 26 a veteran of the British blues scene who was stretching into unfamiliar territory in the group's live shows. He knew how to play quietly as well as full out, and that control of dynamics keeps the heavier tunes from sounding monolithic. Wood, a young, accomplished guitarist, had stepped into the bassist role after Beck exhausted the patience of several other four-stringers. In concert photos, Ronnie is shown playing a Fender jazz bass through a Marshall stack—and that's what his bass sounds like on the record, aggressive with a trebly attack.

"Truth" is one of Rod Stewart's earliest recordings, and notwithstanding his wayward pitch on "Shapes of Things" and the questionable choice of "Ol' Man River", he displays, in the rough, the qualities that would bring him attention as the frontman of the Small Faces after Steve Mariott's departure: skillful phrasing and a music hall performer's sensibility—dry humor chased with honest sentiment. Like the tone of Jeff Beck's guitar, the sound of Rod Stewart's voice was instantly recognizable. Rounding out several tracks are Nicky Hopkins on piano (he would later join as a touring member of the group) and John Paul Jones on electric organ.

Sharing office space with Mickie Most was road manager Peter Grant, who saw in the group greater potential for commercial success than Mickie Most could envision. The studio time was reserved and paid—reluctantly—by Most, but it was Grant who sat in the studio and listened. Once the tapes were mixed, Most offered them to EMI Columbia/Epic, but the executives didn't understand the music and hesitated to commit to a release.

Grant was undeterred; he booked the group into high-profile engagements at the Fillmore East and the Boston Tea Party that generated a wave of enthusiasm and an outstanding review in the New York Times. Grant wired the press cuttings to Epic, who signed Jeff Beck and rushed the album into production. It charted in the US and elevated the group to headliner status. The production of "Truth" and the marketing of the Jeff Beck Group to US audiences seems, in retrospect, a test run for Peter Grant's next project, Led Zeppelin.

Although the "Truth" SACD reveals differences in sonic quality from song to song and exposes the limitations of four-track recording, Steve Hoffman and Stephen Marsh's care in transferring, mastering and authoring the disc makes for a vivid and rewarding listening experience. In an A/B comparison to a venerable Epic LP, the SACD won, hands down. Rod Stewart's vocals and Jeff Beck's guitar lines sound clear, forward and detailed; Ronnie Wood's bass is punchy and unexaggerated; and Micky Waller's drumming positively bursts out of the loudspeakers. The sound quality as a whole is excellent for a recording of the period.

Audio Fidelity's SACD is, without question, the "Truth".