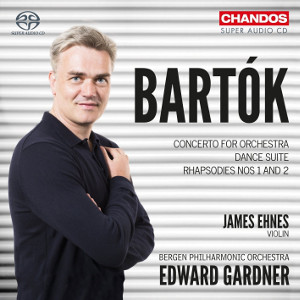 Any account of the Concerto for Orchestra must stand comparison to pioneering gems of recording history such as Bartok: Concerto for Orchestra - Reiner, as well as more recent highlights like Bartok: Concerto for Orchestra, Dance Suite - Kocsis. Needless to say that this recent account affords a far greater range and less "fragile" timbre to the Bergen players than (well preserved) tapes for Reiner's Chicago orchestra. Somewhat surprisingly, the sound here also stands head and shoulders above that served up to Zoltan Kocsis, which is issued at a noticeably higher level (with a consequently narrower dynamic range). All of the technical excellence is undone if the musicianship is not of a similar standing.

Fortunately, from the beginning of the concerto, the Bergen players prove themselves to be "at home" in this repertoire, just as we have come to expect elsewhere. Unusually, Gardner seats the violins antiphonally to great effect in clarity and lightness of timbre. Compared to Kocsis, Gardner allows himself more time in the slower music and, combined with the larger dynamic range relayed by the Chandos recording, generates greater musical tension which he is then willing to release to thrilling effect in the faster movements. Akin to the effect often achieved by Ivan Fischer with his Budapest super orchestra, the attack is fiercely clean and beautiful; the clarity (which should not be confused with leanness of sonority) allows for many details to be readily audible. Added to all of this is a response to the score from Gardner and his orchestra that is as keenly felt and characterised as any.

James Ehnes then joins the proceedings in the two rhapsodies for violin and orchestra. As so often these days, we are offered a variant to the usual editions; here this takes the form of an alternate ending for the first half (which is given a separate track). From this point on, any hint of US suavity is dispensed with and a wonderful earthiness characterises the playing of Ehnes and the orchestra; not that they give way to "rustic" tuning. The sense of excitement that the players themselves feel under the baton of Gardner in accompanying James Ehnes' wonderfully characteristic accounts is palpable and casts the account of the first rhapsody on Bartok, Kodaly, Ligeti - Foster firmly in the shade. However, Bartok: Violin Concerto, Rhapsodies 1 & 2 - Kelemen, Kocsis provides not only the alternate ending for the first rhapsody but one of the second rhapsody as well. Readers must balance this against the more natural perspective afforded to soloist and orchestra here.

To close the disc, the Bergen Philharmonic Orchestra really go to town in the Dance Suite - this is marvellously unbuttoned playing and it sounds like a gigantic (and extraordinarily well drilled) gypsy band. At the same time, the discipline exhibited earlier in the Concerto for Orchestra and fiere clarity remains; all in all this is a tremendously exciting end to a disc that showcases all the artists involved, from the pen of Bartok to the engineering teams of both hall and Chandos to the musicians captured in glowing performances.

Highly recommended; this disc must now count as the finest modern hi-res recording of these works.

John, many thanks for your report which was enjoyable to read. I have sensed before that Gardner would get more out of the Bergen players than Andrew Litton ever could and presumably the new combination must be regarded as a work in progress, so their best surely is yet to come.

You are quite right about the very tough competition and your list of excellent recordings of the Concerto for Orchestra should surely have included Seiji Ozawa's remarkably crisp account with the Saito Kinen Orchestra from the early days of SACD on Philips, which has been one of my personal favourites and in my book some distance ahead of the Kocsis recording; the sound was pretty amazing as well.

Anyway I will try this one as a result.

I used the Concerto for Orchestra as my yardstick. To be honest I was expecting a rather show stopping performance after John's review, perhaps too much as it was always likely that such expectations were too high. Despite Gardner this was recognisably the old romantic Bergen Phiharmonic of Litton days and their approach to the jagged edge Concerto is just too polite and comfortable to arouse any great passion. I like more crudeness, more attack, more climaxes and more emphasis as befits the basic Hungarian peasant folk music around which many of Bartok's compositions are built. Kocsis is particularly good but for me the stand out version remains Seiji Ozawa's remarkably crisp account with the Saito Kinen Orchestra - as mentioned earlier - and by quite some margin.

If you have two or three versions of these works including one of the above, this account will disappoint.

No need to apologise - this is a matter of opinion & I don't pretend to think I am God!

A shame we don't always agree but there we are.

Well Sir Fox, on your advice, I just acquired this and will play it later this evening! The Gardner is still on my wish list however!

I hope you will not be disappointed. Those original Philips SACD recordings in DSD were superb. I guess at the time with this then exciting new technology, the engineers tried really hard to exploit all its benefits.

Hi Bruce, did you not like Steinbacher's VC2 and Keleman's is pretty tasty as well.

John,
Steinbacher’s vc2 is excellent but I am greedy.

I am a huge fan of James Ehnes having heard him many times at The Lighthouse, Poole with Kiril Karabits and the Bournemouth Symphony Orchestra. If you really want to treat yourself Bruce, get a copy of his disc with the BSO of the Britten Violin Concerto.

OK, it's a RBCD but Onyx have captured all the emotion of this brilliant work in what is almost unquestionably the finest performance in the catalogue. 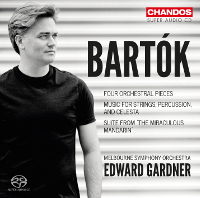 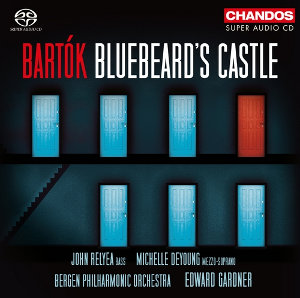