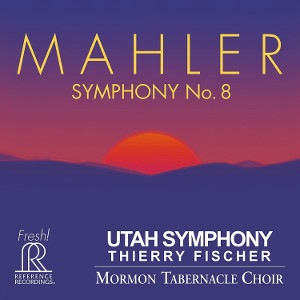 
The Utah Symphony is one of America’s major symphony orchestras and a leading cultural organization in the Intermountain West. It is recognized internationally for its distinctive performances, commitment to music education programs, history and recording legacy. Here they join with the internationally-renowned Mormon Tabernacle Choir to present a thrilling and authoritative interpretation of the immense Mahler Symphony No. 8, “Symphony of a Thousand.” This new release was recorded live in February 2016, from concerts in the Salt Lake Tabernacle in Salt Lake City, Utah, sponsored by the O.C. Tanner Gift of Music. This organization was founded over 30 years ago through the combined vision of Obert C. Tanner and Gordon B. Hinckley, to share performances of the Mormon Tabernacle Choir and Utah Symphony, as a gift to the community.

Thierry Fischer, Music Director of the Utah Symphony since 2009, has revitalized the orchestra with creative programming and critically acclaimed performances that have drawn consistently full houses. Highlights of his tenure include complete symphony cycles of Mahler in commemoration of former Utah Symphony Music Director, Maurice Abravanel, complete Beethoven, Mendelssohn and Nielsen cycles, a multi-season Stravinsky and Haydn symphony cycle and tours of Utah’s five national parks, state parks and national monuments in 2014 and 2017. Maestro Fischer has also initiated a major commissioning program in Utah that has produced new works by Simon Holt and Michael Jarrell, and works by Nico Muhly, Andrew Norman, and Augusta Read Thomas which are on Utah Symphony’s previous album Dawn to Dust (FR-719SACD).

In 2015 Reference Recordings released a very recommendable version of Mahler's 1st Symphony by the Utah Symphony conducted by their Musical Director Thierry Fischer Mahler: Symphony No. 1 - Fischer. That recording taken from live performances given in the orchestra's home – the Maurice Abravanel Hall in Salt Lake City, Utah – showed Fisher's Mahlerian credentials in a most favorable light and they are now confirmed by this stunningly recorded account of the composer's mighty 8th Symphony also taken from live performances given in Utah on February 18th and 20th, 2016.

The venue for this undertaking was the Salt Lake Tabernacle whose capacious acoustic is ideally suited to provide the correct sense of scale for Mahler's gargantuan forces. Thanks to the magnificent efforts of the Soundmirror engineering team (Dirk Sobotka, John Newton, and Mark Donahue) not only have Mahler's huge choral and orchestral climaxes in Part I been captured with breathtaking fidelity and impact but the chamber like textures of Part II are equally well served.

Part I comprises Mahler's setting of the Latin hymn 'Veni Creator Spiritus' and here The Mormon Tabernacle Choir, rehearsed seemingly within an inch of their lives, justify their illustrious reputation with committed singing of great precision and power, as do the fifty choristers of the Madeleine Choir School – both choirs displaying impeccable clarity of diction. Fischer's tempi are attentive to the needs of his singers yet provide the vital propulsive drive. From the imposing opening E flat chord on lower strings, wind and organ, to the blazing antiphonal brass in the jubilant closing bars of this opening section, Fischer's control of his forces does not falter and yields predictably thrilling results.

The total success or otherwise of any performance of this symphony is determined not only by the contribution of the chorus and orchestra but the quality of the eight soloists, especially in Part II – Mahler's ambitious setting of the closing scene of Goethe's Faust. Here Fischer is extremely fortunate to have assembled a most impressive team of singers. The fine baritone Markus Werba (Pater Ecstaticus) delivers his solo “Ewiger Wonnebrand” with firm and beautifully projected tone while the rich bass of Jordan Bisch (Pater Profundus) makes “Wie Felsenabgrund mir zu Füssen” a pleasurable and welcome change from some of the forced and woolly utterances heard on some other recordings. Perhaps finest of all is the tenor Barry Banks, an artist more usually associated with roles in operas by Rossini and Bellini. His distinctive voice easily rides the massive waves of sound in Part I while as Doctor Marianus in Part II he brings a rare 'bel canto' elegance and sensitivity to a passage such as “Jungfrau, rein im schönsten Sinne”. The five female soloists led by Orla Boylan are also a well-blended group who sing with commendable accuracy and radiance throughout.

This being Reference Recordings the presentation of this two-disc set is exemplary matching the exceptional quality of the recording. The liner notes include the names of all orchestral and choral personnel, biographies of the soloists and conductor and full text and translations. Especially valuable is the detailed essay on the work by Paul Griffiths. One minor regret is that with an overall timing of 79' 41” it was not possible for the work to have been accommodated on a single disc as are the versions by Gergiev, Nott, Stenz, Haitink and Solti.

As is the case with all recordings of Mahler Symphonies in the catalogue, competition could hardly be more fierce. Currently there are more than a dozen versions of the 8th Symphony available in high resolution sound, each vying for collector's attention. It is, however, likely that the combination of Fischer’s thoroughly prepared and expertly executed account of the score and Reference Recordings superlative multi-channel sonics will be compelling enough reasons for many to add this version to their libraries.

No mention of Prof Johnson on the cover so Sound Mirror again?

Yes, this is another Sound Mirror production (photos taken from the recording sessions can be found on Facebook)

Quite overwhelming as an aural experience. Not for the faint hearted or small listening rooms. I imagine that even Sound Mirror struggled to contain this one. I found listening intently to be quite uncomfortable, the sheer volume of sound rendering judgement of detailed performance futile. Hugely atmospheric but that's what you might expect from such a large space. 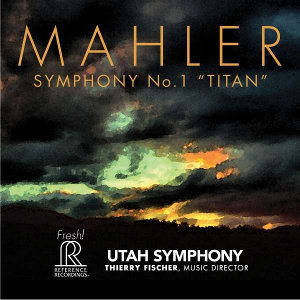