Bach to the future: transcriptions by Busoni / Siloti / Saint-Seans - Weyer 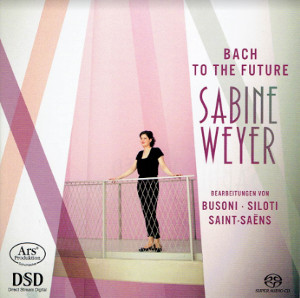 Bach has many faces. Painting with a large brush (for some critical minds maybe too large a brush) one might say that the Brits are masters in giving him such a mellow and deliciously rocking expression, that the German precision uncovers his pursuit for perfection, whereas the Italian whirling characters portray him with eager brilliance. In this recital Sabine Weyer does not fit any of these slots. Her readings are very personal ones indeed.

Of late I’ve come across a number of young artists who do not just give a recital, but seek to put music in an intellectual framework, or motto, if you like. The motto here is ‘Bach to the Future’, a notion borrowed from Robert Zemeckis’ film ‘Back to the Future’. With it, Weyer aims higher than the obvious idea of linking the original (Bach) with the transcriptions (Busoni, Silotti and Saint-Saens), saying that: “The musical arc of this recording resembles a long journey from the deepest shadows (Busoni’s ‘Ich ruf zu Dir’) to pure light (Saint-Saens’ Bourrée from BWV 1002)”.

Sabine Weyer is widely known and appreciated in her home country and beyond, and like in her first album recorded by ARS-Produktion (Bach, Mendelssohn: Concertos - Weyer) she shows a kind of affinity with J.S. Bach that can best be described as ‘reflective’. Her tempi are measured and often the opposite of the nowadays so fashionable (but in my view all too often hurried) ‘engagement’ by many of today’s period players. An example: I do not have the Silotti transcription score and therefore do not know if there are markings as to tempi, but the ‘Air’ from Bach’s third Orchestral Suite takes under Weyer’s hands 5:38 as against Mazaaki Suzuki’s 4:44 in the original, orchestral version.

With all this in mind I started my listening session. Underpinning the ‘musical arc’ the programme starts off with a dark and somber interpretation of Busoni’s transcription of Bach’s Choral ‘Ich ruf zu Dir’; the ominous beginning of the projected journey. The further choices made in this respect (tracks 2-4) are three of the more subdued parts of Busoni’s transcriptions of Bach’s Choral Vorspiele. In 'Nun komm, der Heiden Heiland‘ (3), Weyler doesn’t make it easy on herself by opting for a slower than usual tempo. It makes the synchronization between melody and counter melody more difficult. However, a similar approach in ‘Jesu Christus, unser Heiland’ (4) results in a light and wonderfully structured reading.

Good old J.S. Bach gets his due in the following, unadulterated performance of the French Suite no. 2, “the central part of the journey”. Maybe not as well played as the best available, but nonetheless with a refreshingly sounding piano and a finely tuned, elegant reading. Her qualities as a conservatory piano teacher (at the city of Luxemburg) are particularly noticable in each of the dances.

The inclusion of Bach transcriptions by the Russian composer, pianist, conductor, Alexander Siloti, on whose work Wikipedia is as silent as the liner notes in the booklet, is, in my view, the most interesting part of this disc. Delving deeper in the internet, one becomes aware that Siloti produced a whole series of Bach (and other) transcriptions (http://www.bach-cantatas.com/NVD/PT-Siloti.htm), from which the four as played on this disc are taken. They are new to the hi-res catalogue and on RBCD there isn’t much either (Hyperion). For this reason alone I feel that acquiring Sabine Weyer’s recital merits consideration, especially for collectors of Bach ‘in any format’.

Saint-Saens was a fervent supporter of Bach and his music of which he reworked a whole set of mostly less familiar pieces for the piano. I take it that not many are aware of the details of this achievement and since nothing of it is thus far available in high resolution, one must welcome Weyer’s decision to select two of them for her recital: The famous ‘Tempo di borea’ from Partita no. 1, BWV 1002, the other ‘pure light’ end of the ‘arc’, followed by the appeasement in the Largo from violin sonata no. 3, BWV 1005. The first one played with positive input, the other with acquiescence, clearly marking a rounding off the journey of the ‘Future having gone Bach’.

Reflecting on the presented programme as a whole, I find it difficult to come to a clear judgement. I like her personal and considered approach, which, on the down side, does not always work out well. On the other hand, transcriptions, or should I say: arrangements, do not always do justice to the original. However, the weak moments are more than largely compensated with Sabine Weyer’s involvement in all she does.

Although the recording is of the high standard we have come to expect from Tonmeister Manfred Schumacher c.s. a note of warning seems nonetheless justified as the sound level is markedly higher than otherwise. So please be advised to tame the volume before starting to play.