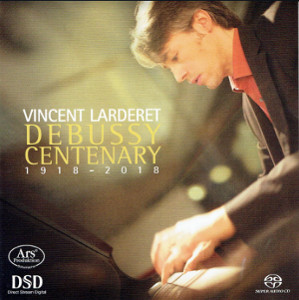 Larderet’s star is rising. And being French, what isn’t more natural than to present a unique recital in preparation of this composers forthcoming Centenary (2018), including the world premiere recording of ‘Symphonic Fragments from Le Martyre de saint Sébastien’ in a transcription for piano by André Caplet, revised and completed by Vincent Larderet. This is his fourth recording for ARS-Produktion and after his latest Brahms adventure he’s once more back on solid home ground.

In our time Debussy appeals to a large, cultured audience, appreciating in particular his spiritual ideas drawn from nature (La Mer) and foreign cultures (5th piano concerto), as well as his artistry so closely associated with French ‘impressionism’. This has not always been the case. Going back a century, public appreciation for the man who preferred black keys over the white, was -politely said- dismissive. I’ve seen a newspaper commentary from around 1906 wherein the commentator wrote in rather negative terms about one of Debussy’s “incoherent” pieces played in the Concertgebouw, Amsterdam. Incomprehension or just ignorance?

Fact is that in the second half of the 19th century, Debussy was largely overshadowed by great German (Wagner) and Italian (Verdi) opera composers, while in France, Georges Bizet (Carmen) and Leo Delibes (Coppelia) enjoyed more popularity than Debussy’s endeavors in a similar genre (Samson and Delilah). But checking out specialist literature from those days, one discovers that not all held the same, negative opinion. To name just one: Henri Viotta, at the time Director Royal Conservatory, The Hague, regarded Debussy as one of the greater talents in France.

So much for the past one hundred years. For this ‘memorial’ recital, Larderet has, to my great relief, chosen to stay away from such popular tunes as ‘La Boîte a joujoux, ‘Claire de lune’ and the likes everyone knows. Instead, he treats us with the highly respected 12 ‘Préludes – Livre II’ and the above mentioned ‘Symphonic Fragments’, preceded by the three images from the first series.

Where do his readings stand? Illustrious predecessors like Alfred Cortot and Samson François surely count amongst the trendsetters of Debussy’s piano oeuvre in the past century on my side of the Rhine, whereas the legendary Walter Gieseking, one of the few German pianists with a real ‘feel’ for this French composer, did the same on the other. Comparing with these masters is difficult; not in the least because of the (huge) difference in sound. In the meantime, there are other, younger contenders for the ‘Preludes’, for instance Larderet’s fellow country man, Jean-Efflam Bavouzet (Chandos), and Steven Osborne (Hyperion) from the UK (Scotland).

Put to the test I found that in the twelve preludes Larderet is capable to stand up to the competition. Differences there are, but mostly as a result of personal views and not in terms of musical integrity. All three have something to go for. But where others are more firmly moulded, Larderet impresses in creating a feeling of floating in the air. Even in prelude 6 ‘La puerta del viño’ is his ‘violence’, brusque though the contrast is, commensurate with the ‘passionée douceur’. I do like Larderet’s luminous playing, subtly applying soft pastel shades yet delivering expressionism from within. And having to choose, I’d go for Vincent Larderet. Not only because he has, in comparison, the advantage of superior sound quality in high resolution, but also in view of the next major item on offer: The world premiere of the transcription (or rather, arrangement) of Debussy’s ‘Symphonic Fragments’.

Basically I’m not a great fan of transcriptions, even if they serve a laudable purpose, like Liszt’s transcriptions of Beethoven’s symphonies to make them available for private consumption. And as I’ve never listened to said symphonic fragments, I can’t judge the correctness of the arrangement. But what I can judge is the fact that here the result sounds so very ‘Debussonian’ that, had I not known better, I would have been convinced that it was him, the Master himself, who composed it for the piano. The liner notes explain in detail the ins and outs of the fragments, Caplet’s input as to the original and the transcription. The way Vincent Lardetet adapted and subsequently performed it, is undeniably the icing on the cake. Taken things together, I think that this ’Suite’ alone is already sufficient reason to acquire this disc; for Debussy adepts probably even a must.

As for me, I have hugely enjoyed Larderet’s sensitive, yet so persuasive Centenary recital.

In preparation for upcoming release of this title, I've been reviewing Larderet's previous three titles. In doing so, I'm simply stunned by his playing and the consistent sound quality provided by the recording venues and by the ARS Produktion sound engineers.

The rear multi-channel tracks aren't simply passive ambience, rather they provide very active sound quality with a full audio frequency sound spectrum. Frankly, this is the first time in several years that I've actually been excited by a new release.

More comments to come later in the month, after I've received this and had time to listen to it.

His Ravel recordings are terrific, sonically and otherwise.