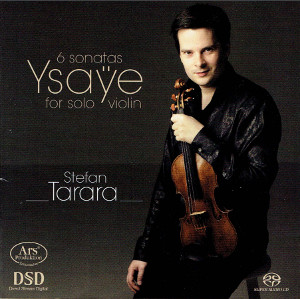 The liner notes start with a quote from a local German newspaper giving the impression of an ‘over the top’ review by a friendly source. I’m of the kind that doesn’t easily take ‘yes’ for an answer. Hearing is believing. And that’s exactly what happened. After having listened to all six sonatas in one session, I cannot but admit that, whilst I may have put it differently, the gist of it is largely true! If your favourite is Zehetmaier’s 2004 performance (EMI RBCD) or any other highly praised recording, then you should listen to this one. Or even better, ask someone to do a blind test. Makes one think twice before passing any judgement on someone less familiar. This disc is an ear-opener.

Some, often young violinists take on these solo sonatas as a means of catapulting themselves into the top echelon in a crowded field of fine fiddlers. If successful and attracting sufficient attention, it may indeed open the door to the Hall of Fame. But even so; listening to various accounts I arrived at the conclusion that in those cases the exploit of superlative technique seems more than once the guiding principle of appreciation. True, playing like that surely is impressive and will not fail to get top accolades in some quarters. But, and I strongly believe so, the downside of pure technique is that it deprives the listener of much what Ysaye really had to say; the intrinsic value of the music and the implicit spirit of the dedicatee (see below).

There are other, in my view better ways to impress. Take for instance the Dutch violinist Frederieke Saeijs, who recorded the six for Linn (Ysaÿe: 6 Sonatas For Solo Violin - Saeijs). She is slower than practically all contenders before her. Yet her reading has met with optimum reviews. I do not have this recording, so I have to rely on prominent reviewer’s opinions saying that she’s gone “to the bottom of what Ysaye had to say”. As suggested above, speed and devilish technique clearly is not all that matters.

In his reading, Stefan Tarara, another notable of the new generation, is even slower than Saijs, yet ticking all the right boxes. I do not normally compare timings, but in this particular case it’s is an eye opener. (Looking at the first sonata; Zehetmaier: 4:28, 4:12, 4:48, 2:55 / Tarara: 5:18, 6:04, 5:00, 3:00). It’s clear that Tarara takes his time to develop Ysaye’s ‘stories’ as contained in the sonatas, and in doing so without leaving the listener with the impression of dragging, or, as some might suspect, to circumvent the formidable technical difficulties. Not at all. His fabulous technique is a means to an end and not a goal in itself. Less impressive? I shouldn’t think so. His playing is not just about putting the proverbial icing on a musical cake. His melodic tale speaks from within the score, thus allowing the listener to participate. His feelings and insight are kind of transposed to the listener. His concentration and gripping expressiveness never falters and that’s probably why one can listen from beginning to end without the slightest trace of fatigue.

I came across this remarkable violinist for the first time when I had the pleasure to review his reading of the two sonatas of Romanian composer George Enesco (Childhood Impressions - Tarara / Vakova-Tarara). A wonderful experience. It clearly wasn’t any of those lucky shots musicians sometimes have: Read John Miller’s excellent comments here: The sound of the 20's - Tarara / Vakova-Tarara.

What’s furthermore so special about this violinist is the quality of his intonation, which, like in Bach’s partitas, is in my eyes an absolute must for playing these sonatas. At any rate for those sensitive ears welcoming irreproachable pitch. With Tarara one is on safe grounds. I won’t go as far as to say that there is no better interpreter, but he surely is one of the finer and more sensitive ones I’ve heard for quite a while. But taking him at face (or rather: ear) value, I cannot but conclude that we are dealing with a star in the making and someone to be reckoned with in this and other demanding repertoire.

As for a description of what these sonatas represent in musical terms and content, I’m pleased - and not only for the sake of brevity - to be able to refer to the liner notes, giving ample detail on each of them. However, for those largely unfamiliar with Ysaye’s solo violin sonatas, suffice it to say that they were written and dedicated to six of the most important and befriended violinists of the time, like Joseph Szigeti, Georges Enesco, Fritz Kreisler and two more or less forgotten ones: Crickboom and Quiroga, whereby style and repertoire of each is embodied in the respective sonata. For instance, in the second sonata one immediately hears its relation with Johann Sebastian Bach (Partita BWV 1006 and, - though nowhere mentioned - Cantata BWV 80 ‘Ein feste Burg ist unser Gott’), who’s compositional style Ysaye has taken as model, or rather, source of inspiration.

Not mentioned in the notes, is that Tarara is Concert Master of the ‘Hulencourt Symphony Orchestra’ or ditto ‘Soloists’ (the names vary, but the designation is taken from the Belgian Golf Club ‘d’Hulencourt’ in Genappe, about 30 km from Brussels, where in 2008 around 50 young and promising musicians from 19 different European countries started off), and which, according to their mission statement “is an ensemble dedicated to enriching lives through exhilarating concert experiences, musician leadership and artistic excellence”.

The violin is a Stradivarius, formerly (most likely) owned by Fritz Kreisler and also used by Renaud Capuçon until 2008. The instrument adds gloriously to the tonal quality of the playing in that it has a warm sound in the lower strings and is balanced throughout, “whether playing hard sounds, lovely cantabile passages or radiant brilliance”; it does all it needs for these marvelous sonatas.

I’ll gladly give Stefan Tarara (and the usual ARS-Produktion’s prime quality of the recording) high marks, thereby also encouraging producers and possible sponsors to make us hear more from him; perhaps in any of Wieniawski’s violin concerti of which there are, up till now, none available on SACD.