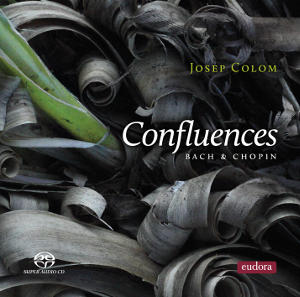 
Bach's influence on Chopin's music is apparently subtle yet powerful. Ever since the Polish master was introduced to Bach's compositions by his first teacher, Adalbert Zywny, Chopin constantly turned to Bach as a supreme point of reference. This influence, which can be detected at various levels throughout his works, is at the core of this recording. Josep Colom's exceptional vision and artistry brings out this two composer's connection by pairing Bach's preludes and Chopin's études and nocturnes on the basis of shared or contrasting key signatures, similar instrumental treatment or texture, subtle harmonic links, dialectic oppositions or spiritual affinities, and with the help of finely-drawn improvisatory passages that either connect a prelude to an étude or act as a transition into a new pairing.

"Confluences: A flowing together of two or more streams, rivers or lakes", or a fine new follow up of Colom's previous "Dialogue" (Mozart & Chopin: Dialogue - Colom) of his previous recital for Mozart and Chopin (Dialogue). Now we have JS Bach and Chopin as another pair of his favourites, and this time Colom seeks spiritual and emotional connections between them

Josep Colom (b. 1947) is from Barcelona, home of his first piano lessons. Progressing to Paris, he was a student at École Normale de Musique. He is now a world-wide giver of both solo and orchestral concerts, and a distinguished player of chamber music with other notable musicians. His recording career began 1982 with the complete Sonatas of Manuel Blasco de Nebra (awarded a top Spanish Prize), followed in 1989 by setting down the complete works of Manuel de Falla, now still hailed as the best version of Falla’s works. He also has recorded the complete works of Frederic Mompou. Colom, now a teacher, is a judge in many important piano competitions, including the International Chopin Piano Competition in Warsaw.

Colom's concerts show he has a wider view of musicology than many of his peers, the programming of his recitals often being far more creative than theirs. His way of putting together what modern terminology calls a playlist is described eloquently by Francisco Jaime Pantíin the booklet from 'Dialogue'. Colom carefully chooses music from several composers whom he thinks have various expressive elements in common, then weaves these pieces together in the form of a narrative.

In this case, the chosen Bach music is from the Preludes of The Well-Tempered Clavier, BWV 846–893, and selections of Chopin's Études and Nocturnes. In playing, a Bach Prelude alternates with a Chopin piece, without a gap. Between each piece might be a few notes changing from one key to another, or a rather more complex passage. Many of the pieces are led into the next by a short extempore extension of the previous cadence (a feature which was common from the Baroque onwards, but rejected by contemporary pianists by the idiom of purity of scores). The overall effect of Colom's highly developed single story of Bach and Chopin's musicality fits perfectly, without the usual interludes, at 78'04 on the SACD.

In live concerts, he would have to break his programme into two parts to give the audience their required relaxation. But here, on this recording. In my youth learning the piano, I played nearly all of the pieces chosen by Colom on "Confluences", and most of them are still deep favourites. But naively I played them to learn each separately, not to let them teach me what these pieces had to offer in their relationships. Recorded Colom certainly makes one think in that direction, and in a delightful multifaceted way.

Playing on a modern Steinway, Colom's style does not follow modern performance practice but activates historical descriptions of Bach's and Chopin's playing. Noticeable rhythmic fluctuation is applied to both composers, an historical certainty but frowned upon by most modern piano teachers. Bach's keyboard techniques were reported by his relatives, surprised by his modification of Baroque standard playing passed from teacher to pupil over the years. Consider John Butt's marvellous study "Bach Interpretation : articulation marks in primary sources of J.S. Bach" (Cambridge, 1990). Understanding these marks might assist us in a deeper understanding and evaluation of Bach's style, and indeed Colom's Bach presents us with a radiance which even works on a modern Steinway.

Chopin's music has always posed a challenge to pianists; his music has retained a universal popularity and continues to be performed worldwide. Given Chopin's unique musical language and stylistic practices, it is essential for the interpreter to comprehend as far as possible their expressed intentions. This is by the combined study of not only his original manuscripts and related source material (i.e. draft scores, early editions and annotated scores), but as in the case of JS Bach, many statements made by his associates, friends and pupils who knew his playing and teaching principles.

Take a Chopin Etude, showing off by many pianists playing in highly-charged forte dynamics, heavily accented and liberally pedalled - to suit the desired virtuosic display. However, this approach is in direct opposition to Chopin's original score markings and his concept of its interpretation; played by Chopin's preferred piano, the 'silvery thin-toned' French Pleyel, an important part of The Sound of Chopin. As an example, the original score markings were actually given as "leggierissimo e legatissimo" (extremely light and delicate with a very smooth effect), carefully balanced against an unpedalled staccato accompaniment. There are many such mistakes because most of the score editors because were ignorant of Chopin's true requirements.

Chopin himself had definite views about his scores, (reported by Marmantel) "Chopin could not bear anyone to interfere with the text of his works. The slightest modification was a gross error for which he would not pardon even his closest friends, not even his fervent admirer Liszt. The composer considered these alterations as a veritable act of sacrilege". Technically, there are many pieces by Chopin which exist which have added sections and/or change in instructions, for him and/or his students. These have rarely been included in a published score. Colom may well play some of this unpublished material in a particular piece or use it in a transition between Bach and Chopin pieces in the whole recital. This includes the Baroque-like ornaments, often in Nocturnes, mostly ignored in printed scores. Evidence also shows that Chopin was very flexible in speeds and rhythms. This applies also to pedalling (Chopin pedalled very sparingly) and intensity of dynamics (Chopin mostly produced an extremely reduced level of sound).

The result is that the moment you hear Colom playing in his recital, you are astonished by the natural spontaneity and deep expressiveness produced by his subtle and perfectly judged interpretations.

Superb pianism deserves recording of the highest quality. The Auditorio de Zaragosa's Sala Mozart, Zaragosa, Spain is a comfortable, realistic and well-balanced location in ambience and piano. The original format for SACD was DSD256 (11.289MHz) in Stereo and 5.0. Simply, sound is amazingly natural and full of detail such as Colom removing the resonating lower notes of a chord while holding the top one. A legion of similar subtleties mean that you can listen to the music without worrying of being disturbed by technology.

If you want a bio for Joseph Colom, you will need to go to the Eudora site as usual. The booklet has an essential 5 page essay by Francisco Jaime Pantí which explains the Confluences and Colom's artistry in delightful detail; it comes in English and Spanish. Don't be too frightened by the two photographs of Colom's head and shoulders!

This mighty mixture of Bach and Chopin interleaving and gloriously portraying their respective radiant pieces makes a new view of both composers for me. As a youth, I played the Bach Prelude No. 1 in C maj, but found it was just simple arpeggios; this time the beauty of the piano recording captured me, for the Bach was light-hearted, with subtle dynamics and speeds which made it pass into the faster, thrilling arpeggios of Chopin's Étude in C maj, op. 10,1. At the end, Bach's BWV 847 races at a florid speed, then passes to a rich sound above the Étude in C min, op.25/12, which ends with a loud full-chord. Here Bach No. 1 in C major seemingly moving in from distance; it plays again to complete the whole 78:4 with a gloriously soft fade away. This was Confluences. And I love it.Thank you eudora! 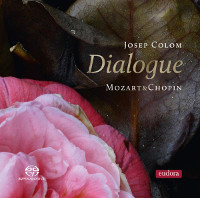