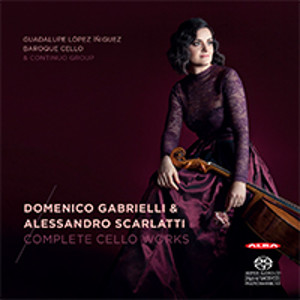 The cello is an exceptionally remarkable and charming instrument, coming from Andrea Amati of Northern Italy, in the early 16th century. He (and others) developed the violin family, first to bass violins (the ‘viola’), then ‘bass violin’ then ‘violoncello’ (which literally means “big little violin”) in Italian. Mercifully, the name was eventually shortened to ‘cello’.

Serious solo pieces specifically written for violoncello were virtually non-existent until the latter part of the 1600s, the beginning of the Baroque. Any solo pieces attempted by cellists before then were typically just violin pieces transposed down an octave. Early virtuoso cellists were very rare since the instrument was mainly used for bass and harmonic accompaniment. The introduction of wire-wrapped strings in 1660 at Bologna gave the instrument a boost, actually making the modern cello with its relatively short scale and size (for a bass instrument) possible.

Domenico Gabrielli (1651 or 1659 – 10 July 1690) was an Italian Baroque composer and one of the earliest known virtuoso cello players. He was a composer of some of the earliest attested works for solo cello (two sonatas for cello and basso continuo, a group of seven ricercar for unaccompanied cello, and a canon for two cellos). These are all on the disc, and soloist Guadalupe López Íñiguez also adds another version of the first Sonata for cello and basso continuo in G in an experiment which was inspired by the two-cello canon (Track 5) to add another cello to the sonata. As well as different textures, this version is also significantly faster in each movement. Also the improvisational features of the ricercares certainly can't be overlooked, injecting much energy and freedom. The Gabrielli set used a pitch of a1=464Hz and the figured bass is not given with score, so this means a certain creative freedom to choose the chords.

Alessandro Scarlatti (1660-1727) was an Italian Baroque composer, especially famous for his operas, chamber cantatas and chamber music. He is considered the founder of the Neapolitan school of opera, and the father of two other composers, Domenico Scarlatti and Pietro Filippo Scarlatti. Alessandro reserved important roles for cellos, in his chamber cantatas and dedicating three of his instrumental sonatas. Another element in his cello Sonatas compared with Gabrielli is his short length of some of the movements, evidently an aesthetic rather technical reason. Certainly, his sonatas are full of expressiveness and richness of feeling. As well as Gabrielli, the figured bass is not given by Scarletti, giving creative freedom to the basso continuo players. The Scarlatti set used a pitch of a1=440Hz (deemed by research, used in Venice at the time, and now the world pitch standard).

On ALBA the programme has been carefully arranged by Íñiguez, and probably with her accompanists; this involved interpolating the sonatas with Gabrielli’s other cello works, Ricarcar 1-7 and Canon for two cellos in D major. This makes a much more exciting listening than just organising every thing in ordered titles.

Guadalupe Íñiguez, in her fine discourse of the ALBA booklet, begins by telling us that in her debut CD she wanted to be “documenting my life as a musician collaborating with a dream team of musician friends with whom I felt supported, inspired and engaged.” She goes on to explain her beloved engagement of ‘Early Music’ and all its attributes, then reminds us that “music performance is an emotion of response to how one feels at the time, not what has been true at some point in history”. Upon playback, one is immediately aware of the energy, playing technicality and strength of emotional efforts by Guadalupe in each piece, and the superb improvisations of her basso continuo which provides a colourful river of sound.

The recording took place in the Lutherian Chapel Saint Lawrence, Vantaa, Finland, by Mikko Murtoniemi (engineered, produced and edited), Speakers 5.1, SACD length 74.54. Well aware that there are only two or three performers at a time in the church's space, the ambiance is close and calm rather than far and echoing. There is a sense of warmth and richness, especially when the cello reaches its lowest notes; the harpsichord provides delicate, twinkling sounds, and the expressive baroque guitar wraps neatly around the chief cello. There are some delightful elegant gruff chords at the bottom of the cello’s range, particular the last notes at the end of a movement. In other word, you mainly listen to the outstanding players with just enough presence of the church hall.

The booklet, with its attractive photo of Guadalupe appropriately dressed in a baroque-like evening dress, in a richness of colour suggesting a cello, is, as I mentioned above, mostly due to Guadalupe’s explanatory writing. Pink paper with lovely photos of flowers holds all the import in English, Spanish and Finland.

At the time of writing, there are no other recorded complete sets of Gabrielli and Scarlatti in the baroque cello sonatas, and complete cello music by Gabrielli, and that makes a good purchase by baroque and/or cello fans. Not only is the music on the disc excellent, but the SACD package is one of the most attractive from ALBA that I have seen