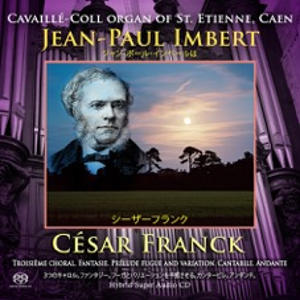 There are many excellent recordings of César Frank’s organ compositions, but unless they have been performed on a Cavaillé-Coll Symphonic organ they will not fully restitute what the composer had in mind. Jean-Paul Imbert does.

Normandy takes pride in having many beautiful church organs, of which those manufactured by the famous French organ builder, Aristide Cavaillé-Coll, as used in this recording, form a class apart. This is a symphonic organ, capable “to facilitate the expressive performance of Romantic music and orchestral transcriptions”. Of this most elaborate type are only a few good ones left in France. The one of Saint Sulpice in Paris, with its 6 manual console and 100 stops, is the biggest and has been the cradle of many famous French organists like Lefébure-Wély, Widor and Dupré. On the other hand, the more modest (3 manual console, 50 stops) in de former abbey church of St. Étienne, in Caen, is one of the best acoustically integrated and homogeneously sounding. Because of its gorgeous, almost voluptuous sound, it is each year the focal point of the ‘Caen International Organ Festival’, and many prominent French organists have chosen it for performing their vision on the romantic French organ repertoire. In short, an ideal and most appropriate instrument for a César Franck recital.

In addition to the liner notes, and to put this musical document in a proper historical perspective, a short history:

The church of St. Etienne goes back to the days of William the Conqueror. The ‘Église abbatiale’ was part of an abbey he (William) had built in the 11th century as a gesture of religious goodwill towards the Pope, who opposed his marriage to Mathilde of Flanders. She, too, had around the same time an abbey built and thus both are, until this very day, known as the ‘Abbeye-aux-Hommes’ (the men’s Abbey) and ‘Abbeye-aux-Dames’ (the ladies Abbey), the former now in use as the Caen Town Hall, the latter as the seat of the Normandy Regional Council.

As for St. Étienne, there is no record of a first organ, but its archives show that a (second?) organ was destructed in 1520. Two centuries later (1737) a new organ was built by Leverbvre in a monumental, carved wooden case. It did survive the French Revolution, but the abbey was taken over by the French civil service. Lack of sufficient maintenance led to the deterioration of the organ. Several attempts to repair followed. But in the second half of the 19th century, it became clear that such efforts proved to be impossible. A new organ was commissioned from Cavaillé-Coll, built-in 1885 in the same, historical organ case. During its construction, great care was taken to ensure the best possible integration in the church’s acoustical environment. The result was unanimously hailed. However, after the D-Day landings on the Normandy shores, at the end of the Second World War, when Caen was for almost 80 per cent in ruins, the organ suffered once again. Many of Caen's historic landmarks have since been returned to its former glory and so, in 1999, the precious Cavaillé-Coll organ was restored, bringing back its prewar coherent and beautifully balanced, rounded sonority.

For those who want to know more, I refer to the excellent Canadian notes in French and English giving an in-depth historical overview of the church and its organs, which can be found here: http://www.musiqueorguequebec.ca/orgues/france/caense.html

Cesar Franck was Titular of a similar ‘orgue romantique’ (romantic pipe-organ) in the Basilique Sainte-Clotilde at Paris and a frequent performer on the Cavaillé-Coll organ in the church of Saint-Sulpice. Most of his compositions originated from these organs, making use of the specifics and ‘solo’ registers at Franck’s disposal. Recording a selection of them on the Cavaillé-Coll organ in Caen is, therefore, a logical step as it disposes of all the required trimmings.


I assume that for most, if not all organ aficionados Imbert’s chosen works are familiar. The liner notes give helpful and detailed information written by the soloist, which, for brevity, I will not copy here. What one does want to know, however, is to what extent a performer is capable of handling the complexities, more, in particular, those of Franck’s three end of life chorales. Having successfully played in Caen before, as well as almost everywhere else in France and beyond, Jean-Paul Imbert proves to be a sterling choice. Comparing his interpretation with others is difficult and hardly possible. There are as many ‘schools’ as organ specialists. And they are right, too. Every organ has its own sound, technical possibilities, its own delay to reckon with, and every church has its own reverberation decay, depending on being empty or filled to the brim. Playing has thus to be adapted accordingly and everyone does it as he or she deems fit under the circumstances.

However, one thing is undeniable: if Franck is played on an instrument that doesn’t have the same possibilities Cavaillé-Coll offers, it will never fully sound as Franck intended. All the more reason to take things at ‘ear’ value. And in that sense I must say that I have greatly enjoyed Imbert’s romantically coloured playing, taking full advantage of the possibilities available. Not just the organ but the acoustics, too, allowing him to put more drive and impetus in his playing, without getting mixed up in the church reverberation blurring the sound, which happens elsewhere all too often when playing in a large empty space.

A fair number of recordings have been made on this same location, but this is the first to make full use of modern technology in high resolution (PCM 176.4khz 24 bit). Recording an organ of the magnitude of a symphonic Cavaillé-Coll is specialist work. One has to deal with unusual reflections, odd sounds from stops, wind engines and the like. Even the space of a church generates its own sound. Jacob Purches of Base2Music was responsible for a proper set-up of microphones. For those interested, I copy below details of the equipment used. Suffice it to say that the hi-res stereo is not a reduction of the 5.1 multi-channel, but taken separately to enhance its own soundstage. Sound buffs will also be pleased to know that this SACD has been mastered by Sebastiaan Kuijt, a former Sony Europe SACD Field Services engineer, who, a number of years ago, took over part of Sony’s super audio activities, as did, at the same time, his Polyhymnia brothers-in-arms, by the way. The result is breathtaking.

Living nearby I was able to ascertain that the recorded sound is as truly life-like as one could hope for, with the only difference that an average home Hi-Fi chain will have difficulty to reproducing the same power as can be literally felt in this glorious church.

The recordings John Miller was so enthusiastic about (and especially the one in Rouen on a similar, slightly bigger Cavaillé-Coll) are no longer separately available. For those who want some of the more familiar, but not all of Franck’s output, this is an excellent choice. For collectors, this disc is a must as it is the first in high definition of the Cavaillé-Coll organ in Caen, arguably one of the finest in France.

NOTE about the equipment used, as provided by the recording engineer:

"About the Stereo - to be more precise I used a Stereo ORTF large capsule stereo pair microphones for the Stereo on its own recording channels and 5 channels for the surround sound mix using Sennheiser MKH2080 omnidirectional microphones. The subwoofer is derived from the centre omni microphone. Because of the symmetry the recording can be enjoyed as Quad and doesn’t require the centre channel. However, the centre is an equal part of a stereo effect and forms a pair with left-centre and centre right. It should be at the same sound level as the left and right speakers".

Thanks to Adrian Quanjer with his fine assessment of the first SACD of Base 2 2017 by organist Jean-Paul Imbert in César Franck. I too found it had good presentation, with useful notes for each track, in a easy to read size and translations in English, French, German and Japanese. There are plenty of notes about recording too, and the statements of recording, especially 176.4 kHz 24 bit PCM to DSD and 5.1. I'm especially happy with the 3-D cross-section diagram showing how the new pneumatic transmissions were laid in an organ.

Adrian also tells us about the importance in organ history by the radical developments of Aristide Cavaillé-Coll, and if organ enthusiasts would like to find out more about Cavaillé-Coll and his work, I strongly suggest obtaining a 5 Disc Pack (3 on DVD, 2 CD) of "The Genius of Cavaillé-Coll, Fugue State Films. Two of the many praises:
"The Genius of Cavaillé-Coll is a triumph - a fascinating and captivating film of huge scope and ambition. Lovers of organ music will be very grateful indeed." BBC Music Magazine
"I can unreservedly commend this magnificent production which so eloquently celebrates Cavaillé-Coll, and which lays before us such a glorious banquet of ravishing sounds and images." The Organists' Review