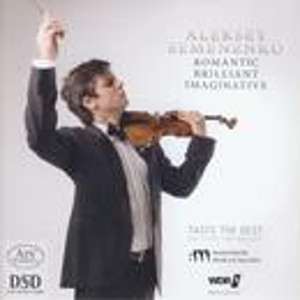 Only after reading the liner notes did I realize that the Ukrainian violinist Oleksii Semenenko from Odessa, who came second in the 2015 ‘Concours Reine Elizabeth’ (violin) in Brussels, is not a relative, but the same person as Alexey Semenenko who’s now living in Germany. All due to differences in Ukrainian and Russian name transliteration. Is it important? No, as long as we know whom we are dealing with.

Under the title ‘Romantic, Brilliant, imaginative’ and with the support of the Cologne University of Music and Dance and the West German Radio WDR, this young and talented violinist, presents a programme based on these three intriguing elements. Behind these elements, I note the noble objective of ‘The Association of Friends and Supporters of the Hochschule für und Tanz, Köln: “to enhance the university’s image and visibility among the public and to promote the institution’s young talents”. Whilst this release gives a glorious summary of what Semenenko is able to do - and that’s a lot - the question is to what extent audiophiles want to have it all.

I’m sure that for most the main item will be Brahms’ Violin Sonata. But it would seem that for Semenenko ‘brilliance’ is the overriding, common factor, with Paganini’s ‘I Palpiti’ leading into Schubert’s attempt to follow-up on that in his 'Fantasy', Semenenko’s main item on this disc. But here, too, there’s more than meets the eye at first sight.

Of Grieg’s three violin sonatas, the first one is the least known and recorded. And if it is, then usually as part of the complete set. In Super Audio only two and three are available. So, getting a number one in high resolution is more than welcome. The first thing one notes is that Alexey is a hugely competent violinist with a strong, though very personally tinted approach. The opening Allegro con Brio is, indeed, played with ample ‘con brio’ (with brilliance), done in around 1:30 less than his Norwegian colleague, Vilde Frang, in her new, complete set for Warner Classics (RBCD). The brush with which Semenenko paints is large and the colours are deep, which eminently suit the dark and tempestuous passages, but obscures some of the dance-like elements of a “.. work of a youth who has seen only the sunny side of life”. But Simenenko’s palette stretches far, and in the second movement, a moderately paced Allegretto, Grieg’s lyrical aspects are clearly on display. And as to be expected, Semenenko pulls all the stops in the final movement bringing the Sonata to a radiant end. With solid support from his piano partner, Inna Firsova, he sort of lifts the sonata to a higher, more audacious level into the realm of major violin repertory, which is for this sonata quite unique and will surely please all those who will appreciate a vigorous reading.

However, as said above, not Grieg but Franz Schubert’s Fantasy D 934 is Simonenko’s main item, which, in terms of total timing is true, but I wonder if the same can be said in terms of musical content. It remains an awkward product, not really liked or understood in his time. On the one hand full of devilish virtuoso passages, but on the other the surprising inclusion of one of his more sentimental love songs somewhere in the middle (‘Sei Mir Gegrüßt‘, D 741) putting question marks as to its ultimate coherence. Be that as it may, it does give Semenenko an outstanding opportunity to show off his technical talents, as he does in the preceding ‘I Palpiti’ of Niccolo Paganini, variations on a theme by Rossini, arranged for violin and piano. A break-a-neck piece for any musician. A thrilling account awaits the listener.

What else is on the menu? An arrangement for piano and violin of the famous Figaro aria from Rossini’s opera ‘The Barber of Seville’, concocted by the Italian composer Mario Castelnuovo-Tedesco (originally for violin and chamber orchestra). Food for acrobats and one wonders if the multiple strings of a chamber orchestra can bring it off more tuneful than Semenenko does. Interestingly though this one is, I presume that many will prefer the other arrangement for violin and piano: Tchaikovsky’s Sérénade Mélancolique, which gets, under the fingertips of Alexey, a brilliantly sentimental reading.

As hinted before, this disc may very well serve the underlying purpose of showing what this upcoming talent is able to achieve in a varied and technically demanding 'romantic, brilliant and imaginative' recital, thereby establishing an important, if not decisively positive rating for the Cologne Music Academy’s ‘Taste the Best’ prize. In that sense it is most likely ‘mission accomplished’, greatly helped by a superb recording by ARS-Produktion’s engineering team, putting his every musically exciting detail in vivid perspective.

However, looking at it in a more general context, I would have preferred Semenenko having played all three Grieg Sonatas, or else, having added one or two violin sonatas of composers who do not hit the music for the millions tag but are nonetheless of high caliber, like Elgar, Medtner or Stenhammer, none of which is at this moment available in high resolution. But then again, you cannot win them all; I for one, am glad to have a first-rate performance of Grieg’s first violin sonata added to my library, with Schubert as a conspicuous outsider bonus.