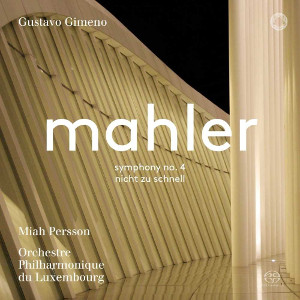 
With their combination of modernism and Romantic nostalgia, and alternation of sweeping orchestral gestures with chamber-musical delicacy, Gustav Mahler’s orchestral works are as impressive and moving today as they were at the time of their premiere. This certainly applies to Mahler’s Fourth Symphony: a work that stands at the crossroads between the largely «Romantic» early symphonies nos. 1–3 and the much more «Modernist» middle-period symphonies nos. 5–7. It is also a fundamentally ambivalent piece: its joyous and accessible surface hides a surprising degree of complexity and even contrariness. While still employing many of the tropes of the traditional nineteenth-century symphony, Mahler at the same time undermines those tropes and distances himself from the symphonic tradition he inherited. The entire symphony works towards the pastoral folksong “Das himmlische Leben” in the fourth movement, sung here by the outstanding Swedish soprano Miah Persson.

The Piano Quartet is Mahler’s only surviving chamber music composition, and the movement represented on this album is the only one he completed. Mahler wrote the piece most likely in 1876 or 1877. Colin Matthews’s orchestration truly enhances the original; Matthews has turned what is in essence a historical document of Mahler’s early development as a composer into something fascinating.

This is Gustavo Gimeno’s fourth recording with the Orchestre Philharmonique du Luxembourg (OPL) for PENTATONE following two releases in May 2017 of orchestral works by Bruckner and Shostakovich and a Ravel album in August 2017. A further five projects are planned in the coming years.

“We’re very excited to make this multi-album collaboration with PENTATONE part of the artistic journey of the Orchestre Philharmonique du Luxembourg and Gustavo Gimeno,” writes Matthew Studdert-Kennedy, Head of Artistic Planning at the OPL. “Having the opportunity to commit to a series of recordings of music by a broad range of composers is hugely rewarding for all involved … We believe that the albums ahead of us have a great deal to offer.”