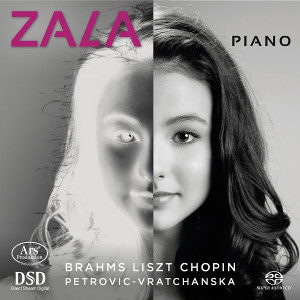 Isn’t it amazing! Aged only fourteen, playing Brahms’ Ballades Op. 10 with such rich maturity and Chopin’s Impromptus with such delicate and sensitive flair that I cannot but conclude that, together with a graciously interpreted Liszt Ballade No. 2, we have here a debut SACD filled to the brim with ample and ripe fruit for a promising career. Would she qualify for child prodigy? Probably, but in my book I’d rather not read things in those terms as age alone doesn’t mean so much. Talent does. She clearly got talent, great talent, and that’s -in my view- all that really matters.

None of these works is easy fare for beginners. Although composed at a young age, Brahms’ 4 lyrical ballads Op. 10 (expressing his feelings for Clara Schumann), require insight and understanding; without it, they become empty daydreams. Liszt’s Ballade needs to be approached with skill and enchantment, whereas Chopin’s impromptus ask for considered, but distinctly sensitive brilliance. In Zala’s readings it’s all there. It’s a real joy to listen to this pearl of imaginative playing. This applies as well to the additional piece ‘Crystal Dream’ from the Luxemburg composer Albena Petrovic-Vratchanska, who is also President of the Luxemburg association ‘Artistes en herbe’, supporting young talent. A nice gesture of Zala’s.

Is everything Zala does perfect? An attentive listener may well find some imperfections. But believe me, perfection is not the primary hallmark of talent. Talent is more. And interestingly, Zala does not come from a musical family. Her talent is her own. Or could it be that she is an incarnation of Annie Fischer or Clara Haskil? Who knows? I don’t believe in incarnation, but sometimes one wonders. How else to explain maturity at a relatively young age; musical insight that goes so much beyond a ‘computerized wunderkind’, whose skills are often obtained through endless practice.

Having already several prizes won, numerous podia visited and concerti played, Zala Kravos (I take it that she prefers to be simply called Zala) looks, indeed, set for a splendid future. Being the youngest Soloist in Residence at the ‘Chapelle Musicale Reine-Elisabeth’, Brussels, Belgium, while still at the European School in Luxemburg, Zala must surely be under constant pressure. Luckily, she was and still is good hands: From 2012 to 2016 a pupil from Maria João Pires, Master in Residence at the same Music Chapel at Brussels, and since Pires’ departure taking lessons from her successor, Louis Lortie, the highly acclaimed French-Canadian piano teaching genius.

Whilst I loved all of it, I was particularly impressed with her Chopin. Comparison with the same pieces performed by others, which, under the circumstances, is perhaps unfair, turned out to be most revealing. In terms of technical skill her elder and more experienced Canadian colleague, Angela Hewitt, is sovereign, but at the same time I find Hewitt’s Fantasy-Impromptu in C sharp minor a shade too manipulated, as a result of which the flow suffers. Kotaro Fukuma, the Japanese Chopin specialist, is technically better too, but what both miss -in comparison to Zala- is the underlying sensitive tenderness, implicitly conveying, as it were, Chopin’s Polish soul and spirit. The way she plays reminds me of the delicate way her teacher, Maria João Pires, plays Chopin. Notably in both piano concerti, recorded in the 1990-ies for Deutsche Grammophon, which belong to my favourite performances of all time. This is the Chopin I like best.

Zala’s choice for having her debut recording made by ARS Produktion and Tonmeister Manfred Schumacher, who is always gentle, patient and yet very critical about the end result, stands for excellent multi-channel High Resolution quality.

What more can I say than wishing Zala a bright future, hoping that she’ll be able to further develop her talent and that she’ll prosper and blossom for the benefit of all serious classical music lovers.