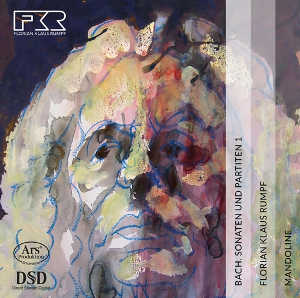 Florian Klaus Rumpf is a sensitive musician whose musical life as baroque mandolin soloist (as well as conductor, teacher and researcher) is also partly dedicated to supporting the German organization DKMS in its effort to combat blood cancer. This attitude portrays someone more devoted to love for his instrument and the intrinsic value of the music than being at the forefront of technical supremacy.

The two violin solo Sonatas and first Partita have been transcribed by Rumpf for his first release on the ARS Produktion label in a projected series of 4. In the liner notes he explains how the violin and the mandolin are similar in their tuning, having the same tonal range and that, “with a few exceptions, the chords used by Bach in his music for solo violin are easily playable on the mandolin”.

His recital creates a special kind of intimacy with the objective - in his words - : “to delineate the musical structure and to turn the supposedly monophonic texture into a polyphonic one. As a result, I had to reduce the tempo in some movements in order to ensure its intelligibility.” This may be so, but it does contribute to an uneven result, where, from time to time, it breaks up the natural flow of the music.

I’ve always maintained that Bach can be transposed to and played on any instrument. Listening to this recording I got second thoughts. A mandolin does not easily replace a violin as one cannot apply bowing techniques. Listening to other, similar recordings, I came to the conclusion that, in this case and my personal view, the problem rather lies in a slightly unbalanced effect of Rumpf’s researched playing.

It is nonetheless of particular interest to other mandolin players who want to compare Rumpf’s style and approach to theirs. Moreover, it is an attractive programme for late night listening.

The recording is clear, putting the mandolin center stage and, in multi-channel, sufficiently ‘off the back wall’ in the listening room.