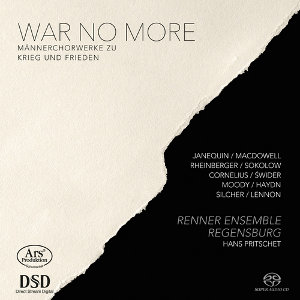 WAR NO MORE. This is the second album of the Renner Ensemble that comes to my desk and it looks set to become a memorable one as it marks the 100th anniversary of the end of the most gruesome and mankind destructive war in European and, indeed, World history. The Great War, as it is called in France, is still on many a mind, as I’m sure it is elsewhere, too. In my part of the world it is official policy to keep the war history alive in order to preserve peace.

With this in mind, the Renner Ensemble’s selection of war songs from various sources, covering a wide range of moods and thoughts of all times, ought to be welcomed. In the accompanying booklet full texts are given in their original language with English translation. Some of these songs were meant to boost morale and others to set forces up to shocking heroism, giving the unaware reader the shivers. However, a large number deal with lament, sorrow, resignation and, of course: peace.

They may not all be of the same quality, but I don’t think that this is the Renner’s main concern, their prime objective most likely being one of memento; to remind the current and the next generation of the horrors of war. In short: a collection that makes one reflect on the dark side of mankind. A noble goal that merits all our support. The younger generation is taken care of in No. 16 ‘Imagine’ by John Lennon and the final No. 17 Negro Spiritual ‘Down by the Riverside’.

There are nonetheless many unexpected, remarkable gems like No. 3 ‘Gebet im Kriege’ from Kurt Kienzl, No. 5 ‘Abend am Toro-See’ from Rheinberger, or No.10 ‘Supplication for Peace’ by Ivan Moody, No. 12 ‘Friedenslied’ from Michael Haydn, and, perhaps most impressively, ‘Deus, protege a bello’, from the Estonian composer Veljo Tormis, giving ample proof of the Renner Ensemble being one of the very best male chorales in Germany. No wonder, as its origin lies with the ‘Regensburger Domspatzen’, the boys’ choir having rendered so many cantata and oratorio recordings to unforgettable experiences, notably on the Archiv label.

The vocal sound is splendidly captured by ARS Produktion, putting the choir just in front of the listener, allowing for a coherent yet detailed perspective, making this disc all the more rewarding

WAR NO MORE. A too lofty ideal? Perhaps. But that shouldn’t prevent any of us to strive for it with all means available. This disc surely is an admirable one. In my view a must for lovers of choral music and maybe also a moral duty for the rest.