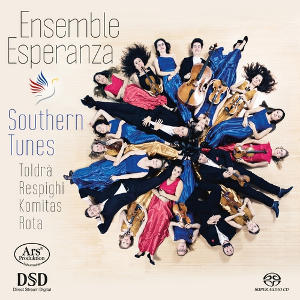 This is the second release of Ensemble Esperanza for the ARS Produktion label: “Southern Tunes”, as opposed to their previous “Nordic Suites”. It underlines the Pan European aspirations of a group of young musicians from all over Europe. And as many of us are well aware, music does not have limiting borders. It’s universal and, moreover, these musicians play in tune! For the origin of the ensemble I may refer to my previous review, but, after a year of very successful stage appearances, it would seem that it is no longer just a group of stipendia at The International Academy of Music in Liechtenstein getting together for a project, but gifted players with a firm commitment to carry on under the hugely stimulating Concert Master, Chouchane Siranossian.

In only a year’s time the Ensemble Esperanza has developed into one of the best string ensembles I know, and this disc is further proof of what a combination of talent and hard work can do. They bring together music from Italy, Spain and Armenia. Some known, some less so and something far from my home, but undoubtedly close to Chouchane’s heart: Komitas’ miniatures, based on Armenian folk songs, I wasn’t at all familiar with and therefore all the more interesting to have it on record.

As before, the youthful energy of this group is infectious, it’s all embracing and uplifting. A rare experience. Every detail stands out but is at the same time perfectly merged with the overall flow into a coherent musical display. String players know how difficult it is to play in unison with only a few (listen to Nocturn of Toldrá’s “Vistes al Mar” or Serabanda in Respighi’s suite for strings). Realizing how many hours of practicing must have gone into it, it all the more hightens the sheer pleasure to listen to the seemingly effortless result. It is no longer ‘esperanza’ we are listening to, but rather an ensemble of ‘confirmará’.

In its original version for string quartet Toldrà’s “Vistas al Mar” the Zemlinsky Quartet delivered an attractive reading on Praga Digitals Spain through Strings - Zemlinsky Quartet, this one, however, clearly has more weight and more breath. The adaptation for string orchestra is also from the composer. However, the attractive shades and colours are from the Concert Master and members of Ensemble Esperanza.

Respighi is widely known for the Pines of Rome, but his suite for strings P.41 does not ring many bells and was up till now not available in high resolution. In this suite Respighi looks backwards to Italian baroque elements. On that basis it is carefully crafted into a gem that will surely appeal to a large crowd. With its charming and varied dance melodies, it is a more than welcome addition to the SACD catalogue. And not only that: Compared to scarcely available RBCD versions (Orchestra Sinfonica di Roma and Chamber Orchestra of New York) Esperanza tops them all.

As for Komitas, his Armenian miniatures, are in fact a collection of folk tunes put to music for string quartet and later for string ensemble by the Armenian cellist Sergei Aslamazian. The suite gives the listener some revealing insight in traditional daily life in Armenia, going from wittiness to melancholia and all moods in between. It is very likable with an Eastern flavor and played with an exemplary superiority, thanks to Chouchane’s roots and superb solo playing.

Ever since he composed music for the Italian filmmaker Fellini and more in particular Coppola’s “The Godfather”, Nino Rota grew in popular appreciation and ditto appraisal. Many recordings of his works, also in super audio, exist, but a good version of the string concerto is hard to come by. The other Hi-Res version Serenata Italíana - I Musici positively reviewed by John Miller, is in stereo only and doesn’t have the same sound quality as this one.

Having been present at the recording sessions in the Austrian village of Schwarzenberg, I have once more come to realize how important the input of the recording engineers is. It is not only the kind of equipment that counts, but even more so the ears and musical insight. Manfred Schumacher and his assistant Martin Rust clearly possess all these qualifications.

Rounding it up: this is for all the reasons set out above plus the excellent and informative liner notes, a disk on no account to be missed.

It seems to me that there is a certain hardness to the sound in the upper registers that the application of a little vibrato would have done much to ameliorate.

When I listen to 20th century music, I really do not appreciate HIP baroque sound. I only listened to the Toldra and 3 bands of the Respighi before giving up with a sad sigh.