On the issue of Challenge Classis, CC confirms that the only 'real' cover is the one on their website: https://www.challengerecords.com/products/15634480442275. We must ...

I wonder who does stream in hi-res. It would indeed be interesting to know which do, as many listen in stereo and would thus be able to profit from it. Some claim, like Deezer ...

I believe this is out of print (oop). imho, a fantastic disc.

So, how does one know if a recording has been remastered? I actually have 3 copies of this performance, 2 on vinyl and the RCA SACD. I believe they all have different masters. 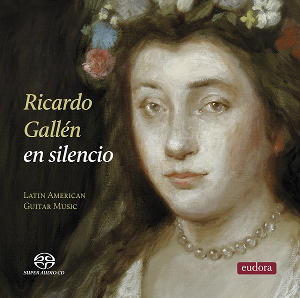 
Ricardo Gallén, one of the one of the most distinguished and accomplished classical guitarists, offers an intimate immersion into Latin American guitar music, alternating brilliant and nostalgic pieces. “En Silencio” presents a selection of some of the least and the best known works of twentieth-century Latin American guitar repertoire, among them Astor Piazzolla’s Invierno Porteño, Agustín Barrios’s La Catedral and Jorge Morel’s Sonatina. On this recording, Ricardo Gallén performs on a copy of a 1864 Antonio de Torres guitar by Paco Santiago Marín.

After I reviewed the first Ricardo Gallén guitar recital on Eudora, I was hoping to see more. And here it is, to my delight. Looking at the cover, one can see the slightly odd title “en silencio”, translated as “silence”. Is this some sort of philosophy about a guitar recital as whole? In fact you must go the title at the end, “En Silencio”, which is the last piece by Carlos Fariañas at the end of the music on the disc. Perhaps this is a subtle joke?

At the front of the Booklet, eloquent writer Mario Alcaraz gives philosophy, quite interesting. It brings comprehensive definition of a true artist, of which he outlines two ingredients. “The first ingredient comes from a kind of peaceful, pleasurable understanding of the world – a mixture of love and insight…we contemplate the beauties of Nature, or when we fall in love, see a great work of art or listen to a beautiful piece of music such as Villa-Lobos’s Prelude No.1.”

The second ingredient is totally independent from the first; and Mario Alcaraz tells us “it is virtuosity”. This takes much willpower and discipline, but the right teaching eventually develops the ability to perform the miracle of art where one expresses naturally. Algaraz then declares “When vocation and virtuosity combine, you get a musician of the calibre of guitarist Ricardo Gallén.”

A final vision of Gallén’s music by Alcaraz is to enjoy the new album by relating it to the infinite beauty of flowers. We are invited to feel the delicacy, subtle fragrance, wealth of colours and “exuberance of the floral world”. Not all listeners of the “en silencio” recital on this SACD follow Alcaraz’s philosophies.

But, unusually for a disc’s booklet, Gallén himself writes an “Acknowledgements”, a detailed “seed for the idea of making this recording…” This is a remarkable series of influences beginning from 2015 - all artists, friendships, audiences, enormous professionalism, relatives and his wife Eva, all for love. Having read all this, it is clear that deep emotion is present at all levels in this guitar work, although I’m not too good at assigning many flowers when listening!

Since the booklet does not give a standard career, here is a short one. Ricardo Gallén, was born 1972, so I'll supply some notes on his career from there. Since the 90's he has been a world-renowned guitarist, giving highly acclaimed solo recitals throughout Europe and America and performances in concerts under the direction of well-known conductors. He has made a number of CDs, mostly for Naxos and has received over twenty international prizes. Apart from his concertizing, he has had a number of teaching positions, and now teaches guitar at the Hochschule für Musik "Franz Liszt", Weimar, Germany.

The first word which came to me on listening to this disc was "intimate", such is the controlled intensity of Gallén's artistry.
Most of the works Gallén plays here are part of his repertoire when he was 15 to 20 and many guitar enthusiasts will hear these delightedly.

Gallén's tone, adduced from his guitar (2003 Paco Santiago Marin, after Antonio de Torres FE37 (1864)) is rich, varied and resonantly beautiful. In the upper voice he can change the timbre to a sharp-edged, penetrating tone or to a soft-edged, warm tone, the foundation of his expressive interpretation. In the lower voice his dynamic control is remarkable, changing the volume of accompaniments from loud to soft with innate skill. I was also very impressed with his ability to make complex polyphonic passages sound as if several instruments were playing. Even when playing fast, virtuosic passages, he makes a minimum of string whistles or fingerboard noises. He can, however, deliver fast, soft low note rows at the same time producing an underlying pecking noise on the guitar body, and swelling fast-repeated deep notes as if an accompaniment by timpani. A very impressive range of tones indeed - and he plays all the repeats, a real benefit. Gallén's favourite guitar is a 2003 Paco Santiago Marin, after Antonio de Torres (1864).

An extremely high-quality solo requires a recording just as appropriate. This one was made in Auditorio San Francisco, Ávila, Spain, Oct 5-7, 2015. From the photos in the Eudora booklet, it shows the dome above the end of a post-church, with a tiny Gallén sitting a long way below, on the platform with his chair and guitar. The Producer and recording engineer is Gonzalo Noqué, overseeing Sonodore and Schoops microphones and recording at DSD256 (11.289MHz). The guitar’s sound is miked relatively close in the Auditiorio but together with the dome height above, this gives a lovely smooth luminous “halo” of ambience which perfectly fits into the large wide range of Gallén’s music. This sound was best in 5.0 multi, but in such a large space the stereo sounds are also very good. In either, the essential feeling of intimacy from Gallén is well heard.

My previous wish to hear another recital by Eudora’s Ricardo Gallén has certainly been fulfilled. Also, it was interesting to read much on music making and it’s presention in the rather unusual booklet; for me it added underlying philosophy to the playing that was then captured with startling realism in 5.0 high-resolution sound. Highly recommended. 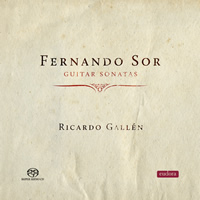