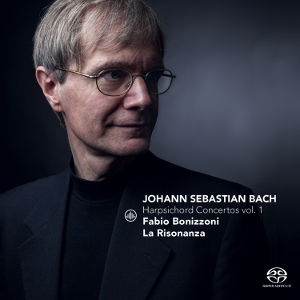 
This is the first volume in a complete survey of Bach’s harpsichord concertos, recorded by La Risonanza in one-to-a-part practice performance.

With his Fifth Brandenburg Concerto of 1719, Bach had created the first ever harpsichord concerto. From 1729, in Leipzig, the opportunity arose to continue this experiment: each week at Café Zimmermann he conducted his Collegium musicum in orchestral concerts that lasted around two hours. In the summer of 1733, he took delivery of “a new harpsichord, the like of which has not been heard before around here”. This magnificent instrument, which featured at the Zimmermann concerts, urgently called for concertos to be played by himself as soloist, and even more so his sons and students. Not only in Saxony but also well beyond, Bach was considered to be the absolute authority in all things harpsichord and organ; he thus had to make his own contribution to the emerging genre of the “clavier concerto”. The manuscript of his six harpsichord concertos BWV1052 to 1057 should therefore be understood as a repertoire collection for his Collegium musicum, and as a compositional manifesto.

Within the six concertos, each work takes on a specific function: The D minor concerto is the longest, most virtuosic and most Italianate of the collection. The stormy and sombre concerto is followed by the serene and cantabile E major concerto which, as Joshua Rifkin has convincingly argued, may well be based on a lost oboe concerto in E flat major. Whilst the concertos in D minor and E major are substantial works, the concertos in A major and F minor are far more compact. Both display noticeable influences of the galant style and were therefore probably not written before 1730.

Let me start by saying that Bach’s concerti for harpsichord are such wonderful gems that any well played set will immediately excite a music lover’s mind. With the full set of six (or seven, as some believe) concerti Bach ably demonstrates what an exceptional craftsman he is, and in this particular case in regard to inventing new and remodelling, transposing and rearranging existing material like no one else has ever been able to do. No wonder that many highly appreciated, but competing versions exist; though seemingly catering for various distinctive trends and audiences. There is the I-can-play-faster-than-you brigade, the hyper-HIP-staccato-players and, as I remember from the olden days, the slow-motionists like Hermann Scherchen.

My first impression with Bonizzoni and ‘La Risonanza’ was one of a ‘middle-of-the-road version’. But with a view to its gray-ish connotation, it is perhaps better to call it ‘traditional’, although both are not entirely correct as I discovered during further listening sessions. I mention this primarily to underline that in his readings Bonizzone refrains from any sort of extremism as described above, devoting instead his knowledge and insight entirely to the intrinsic value of the music.

In some of the undeniably very well and expertly played modern, trendy versions, part of Bach’s rich and skilfully developed harmonies risk disappearing in the buzz of excitement. With Bonizzoni none of this happens. He takes his time if and whenever needed to judiciously exposing these elements without any hint of dragging. On the contrary. As may be expected from an Italian soloist, his rendition is lively and alert. Keeping the pace as it should. In fact, in the final movement of the ever so popular first concerto BWV 1052, he is even (slightly) faster than others, like for instance the much praised (and I think rightly so) Diego Fasolis and I Barocchisti.

To me it looks as though much of what Bonizzoni does relates to Ton Koopman, his teacher at the Royal Conservatorium in The Hague, The Netherlands (where he is now a teacher himself) as well as his experience as a member of Amsterdam Baroque, Le Concert des Nations and Europa Galante.

With 5 members of ‘La Risonanza’, playing ‘one-to-a-part’ he sets down an attractive début volume of the complete set, which will most certainly be high on my list as a welcome and hugely engaging view on these concerti. That said I will reserve my final judgement until I have heard the rest.

The liner notes are most informative as to the manner in which the concerti where taken, paste and shaped. The recording is good (though not from the famous Bert van der Wolf stable), but because of the cello and violone being in slight prominence, the overall sound is a shade dark. However, reining in the speaker’s lower end will restore the balance to a pleasant sound stage.