Chesnokov: Teach me thy statutes (Hymns from the all-night vigil and divine liturgy) - Gorbik 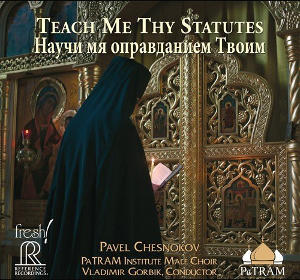 Reference Recordings are opening a new series of SACDs from “Patriarch Tikkon Russian – American Music Institute”, otherwise known as the PaTRAM Institute, a highly professional male group which is a collaboration of Russian and American singers. The present album is the first recording for this project. It is devoted to selections of Orthodox choral music in the Slavonic language, all by the famous Russian composer Pavel Chesnokov, whose output was about 500 choral works, 400 of which being sacred.

Chesnokov was born on October 25th 1877, in the village of Ivanovskoye in the Moscow Province. After a youth with much interest in music from the village choirmaster, Chesnokov graduated from the Moscow Synodal School of Church Singing with a gold medal. After that, he worked hard by teaching at the Synodal School and directing various annual summers in Moscow and Petersburg. At the age of 36, he enrolled in the Moscow Conservatory, graduating in 1917, for composition and conducting, and after he became a choirmaster for Moscow churches. He was much appreciated for his singing and composing, but after the October Revolution of 1917, he worked as the choirmaster of Bolshoi Theatre and taught at the Moscow Ballet with other works, as long as such activity was permitted (until 1928). He died in wartime March, 1944, from a heart attack and malnutrition resulting to standing at bread queues.

This SACD album of Chesnokov could be thought as a eulogy, with a programme by conductor Vladimir Gorbik showing a radiant collection of Chesnokov’s work, including selections from very well-known sets such as “The Great Doxology”, “Cherubic Hymn” and “Only Begotten Son”; the whole set are from the “All-Night Vigil” (itself highly praised). There are 15 items in a 67:14, but the Hymns are not listed in the booklet, only the back of the case. The booklet, though, has an excellent account of each piece from Vladimir Gorbik as ‘Conductor’s Notes’, on the left page in Russian and the right in English. Texts of title, Cyrillic, transliterated and English are printed in separate vertical columns which are quite handy to use.

The recording took place at the Church of Apostle and Evangelist John the Theologian at the Saratov Orthodox Theological Seminary, Russia. As well as I have previously mentioned, PaTRAM and two other Russian professionals; The Choir of the Moscow Representation (Podvorye) of the Holy Trinity-St.Sergius Lavra & The Hierarchal Men’s of the Saratov Diocese. This gives a total chorus of 42. The way in which conductor Vladimir Gorbic organised this large chorus produces remarkable sounds in these hymns. There are Tenor 1 (10), Tenor 2 (11), Baritone (9), Bass 1 (3), Bass 2 (4) and Basso Profundo (5). Also two soloists: Mikhail Davy – ‘Blazhen much’ and Vladimir Krasow – ‘Great Doxology’, plus ‘Mnogoletie’.

The first moments of hearing the 5.0 multi setup puts us into a large church (a photo on the back page) with carefully placed sections of the choir in front of us. High walls hold colourful paintings of Saints and icons wrapped by much gold, all of which supports a clean acoustic ideal for the beautiful Russian monastic style, aiding the singing through its fullness and richness of sonority. The first Orthodox Psalm, “Bless the Lord, O My Soul”, shows just a few of these beautiful Russian monastic styles. In this first Psalm, quiet singing of fullness and richness of sonority is the main part, with superb diction.

The second Psalm “Blessed the Man” has a soloist (Mikhail Davydov, bass-baritone) taking the place of Man – “Out of the depths have I cried to Thee, O Lord”, and such line of each verse in rich tone is answered by the chorus in deep tones, underpinned by the five Bass profundi, whose voices go down and down like steps at the end, into silent blackness. Intensely beautiful. Going now to the final piece, ‘Salvation Is Created’, we have a powerful, virile statement, fully exuded by the whole of the chorus and magnificently directed by conductor Vladimir Gorbik, who says “Music and our emotional response to it are far beyond words”.

Pavel Chesnokov’s genius in writing these pieces from which this album of PaTRAM Institute and Reference Recording is superbly collected and recorded in the best way available. I congratulate those involved, and look forward to the next in this proposed sequence. And it is interesting to note the blessing given the cast by His Eminence, Metropolitan Longin of Saratov and Volsk , in July of 2016 in the Church of Apostle and Evangelist John the Theologian at the Saratov Orthodox Theological Seminary.

No matter how many recordings of Russian Orthodox choral music you have, this one should be on top of your pile. Directed, sung and recorded under the best imaginable circumstances, it’s a must for all devotees of Slavonic Orthodox chant.

Pavel Chesnokov, choirmaster, conductor, composer, teacher, is perhaps the most prolific Russian choral composer, with around 400 sacred titles, of which until now none were available in high resolution. All the more reason to welcome this new release. His output is of all times, as much sought after under Tsarist and Soviet rule as it is today in the Russian Federation and elsewhere. It follows traditional patterns, as customary. His best known work is ‘Do Not Reject Me in Old Age’ for solo basso profundo (or basso profondo), the lowest male voice, capable of singing a whole octave lower than a bass part. These low voices play a crucial role in choral music of the Russian Orthodox Church.

Seen from a historical perspective, the Russian Orthodox Church originated from the ‘cave monastery’ founded in 1051 in Kiev, Ukraine, now known as Kyiv Pechersk Lavra. Having lived there for some time I visited several orthodox churches big and small, including ancient wooden ones in the countryside; often during divine liturgical services. Time and again I was struck by the mystical singing, underpinned by these deep basses, leaving me with an otherworldly awareness. It’s not just the low notes that make it so special, it’s the typical, broad resonance and sonority reaching parts deep down in your consciousness you didn’t think you had.

Listening to the reinforced PaTRAM Institute Male Choir of the Patriarch Tikhon Russian-American Institute, the same emotional experience surfaced. It felt as though I was back in the Kyiv Saint Volodymyr Cathedral, with the difference that the quality of this combined American-Russian choir, with its large bass complement, including 5 basso profundi, so accurate and skillfully directed by its conductor and choirmaster, Vladimir Gorbik, attains a level of perfection one does not normally get in a regular Sunday service.

Their performance of a selection of chants from Pavel Chesnokov’s Divine Liturgy of St John Chrysostom, Op. 42 and All-night vigil, Op. 44, sung against the backdrop of a large iconostasis, acting as a kind of soundboard in the Church of Apostle and Evangelist John the Theologian at the Saratov Orthodox Theological Seminary at Sarotov, Russia, gave me the same esoteric awareness as I remembered from my earlier ‘live’ experiences. Such realism is clearly the result of the extraordinary recording process, of which John Newton and Mark Donahue of Sound Mirror deserve all the credits.

Many on this site will share Reference Recordings philosophy that sound is as important as the music. In this respect both RR and Sound Mirror are doing, once more, the high resolution community an immense service. I have a choice collection of orthodox sacred singing by highly respected Ukrainian (Kyiv Chamber Choir) and Russian (St. Petersburg Chamber Choir) as well as some lesser known choirs. But never before had I heard such magical singing, revealing, as only the best multi-channel high resolution recording is able to deliver, the spatial ‘hollowness’ of a large orthodox church. Furthermore, there is no ‘muddying’ of voices between the various groups, nor any distortion in the louder passages, as is so often noticeable in low-res quality.

It is hard to discover and compare the individual inputs of the three choirs: The Choir of the Patriarch Tikhon Russian-American Musical Institute (PaTRAM), the Choir of the Moscow Representation (Podvorye) of the Holy Trinity–St. Sergius Lavra, and the Hierarchal Men’s Choir of the Saratov Diocese, assumedly mixed according to voice group. In fact, there are none, which is in itself remarkable after only a couple of combined repetitions. No doubt thanks to their inspirational conductor, Vladimir Gorbik, the overall technical and musical result is phenomenally homogeneous.

The two soloists Mikhail Davidov (Baritone) and Vladimir Krasov (Baritone) clearly stand out. Pity that no personal background information is given. From what I was able to retrieve, the latter appears to have been (until 2015) a Bolshoi soloist, the former connected to the Helikon Opera in Moscow.

In his extensive ‘Conductor Notes’, Gorbik explains in detail the ‘why’ of the chosen choral compositions. Also, Longin, the Metropolitan (head of an ecclesiastical province) of Saratov and Volks, gives comprehensive information about the composer, Chesnokov, both very much worth reading and to which for brevity I may refer. Neither will I dwell on the individual chants. I find it difficult to express a preference. Different though they are, all of the chosen ones are of outstanding beauty in every sense. However, were I pressed to pick at least one, it would be the final, Kyivan Chant arrangement of ‘Thou Hast Worked Salvation in the Midst of the Earth’, “sending the basses into seemingly bottomless depths”.

After hours of intense listening, as well as comparing with other liturgical chant, I arrived at only one conclusion: On no account to be missed.

(Please note: Unlike my normal practice, I listened to both the stereo and multi-channel layer. As some of the essential ‘roominess’ is missing in the stereo layer, I had to take away half a star to distinguish it from the superior impact of the surround. However, stereo listeners need not worry. At closer range and with the two speakers not too far apart, the depth of the sound scape is still of an extraordinary quality!)

Very moving, beautiful, authentic Russian Orthodox music. The notes claim 5.0 recording but my copy plays the 3 front channels only. I wonder if anyone else has found this and is it as it should be?

This is indeed a surround recording. Reference have confirmed that they had a faulty batch with only 3 tracks playing. These have been withdrawn and replacements will be available during week commencing 28th May. They are posting me a new copy. The stereo tracks are fine. Great, caring customer service from Reference. Highly recommended performance and recording.

I got my copy from the new surroud batch this morning, and having lived in Eastern-Europe (Ukraine after its independence) for some time, I plan to contribute some of my views on this, indeed, very special album.