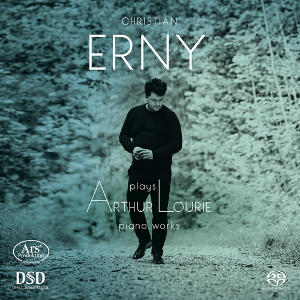 
Arthur Lourié (1892-1966) is one of the most important representatives of the Russian avant-garde, even though he unfortunately never received the appropriate attention due to emigration, among other things. While his early piano pieces were still linked to Skriabin's late work, the composer soon developed completely new forms of musical discourse, including graphic notation.

Christian Erny assembled a roughly hour-long selection of works that offer a foray into the innovative and fascinating world of Arthur Lourié.

As a purely amateur music lover, may I commend this disc to all the Ars Produktion fans out there - it does seem to have slipped under everyone's radar, and I only found it due to a bargain offer and the perils of Spotify! Lourie was a Russian Jew, who fled to Germany and then France after the October revolution and then again sailed for the USA when it was clear that the Nazis were on the brink of occupying France. Sadly, he ended his life and died in the USA almost unknown. Christian Erny tells in the notes how he came across Lourie through his music professor, and was intrigued enough to delve more into his life and work. He was right to, as this turns out to be wonderful, approachable music from a composer with an individual voice. If you imagine Debussy meets Satie you will have an idea what to expect, but this is in no way derivative music. You sense a darkness of thought entering the music as he grew older and, given his life, that is only to be expected. This disc has been on my player now regularly for the last 2 or 3 months and it continues to yield new insights and pleasures. Needless to say the recording is exactly what you would expect from this source, and, although with nothing to compare it to, you sense that Erny is quite inside the music and proves a persuasive advocate.

If you fancy a leap into the unknown, I do urge you to try this.