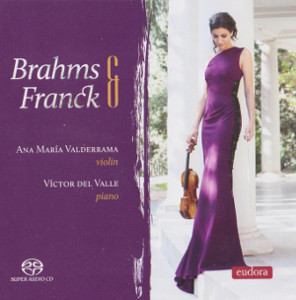 At the celebrations concert for the 70th birthday of Her Majesty the Queen of Spain, violinist Ana María Valderrama made her debut with the conductor Zubin Mehta. Winner of the 1st prize and Special Audience Prize in the XI International Violin Competition Pablo Sarasate 2011, she has become the first Spanish violinist in the history to win this prestigious award. Following this, Valderrama won a number of competitions, played in concerts such as England, Germany, France, Italy, Portugal, Greece, Spain, Russia, Mexico, Colombia, Jordan, Tunisia or USA, and has been invited to play soloist at main concerts around Europe. Not only all this, but she is dedicated to chamber music, particular at Festivals.

Víctor del Valle studied at the Reina Sofia School of Music (Madrid) with his brother, Luis, and they deputed in 2004 at the National Music Auditorium in Madrid. They had awards of a number of medals, and in 2005 the Mozart Award at the Bialystok International Piano Duo Competition in Poland. During 2013 to 2014 they had a telling “The Pianos with Passion”. In a DVD (2017) the brothers were playing Mozart, Bizet, Gershwin and Ligeti. Víctor also combines his concert performances with his teaching work at the Conservatorio Superior de Música de Aragón.

This is the first disc in which Ana María Valderrama plays with Víctor del Valle, and they invariably show a mutually close understanding of Brahms and Franck in this programme. The story of the first piece is fascinating, and not just in its performance, but the history.
.
Brahms’ important Scherzo WoO 2 in C minor important works begins this Violin and Piano recital. In fact it is a part of a collaborative musical work in 1853 by three friend-composers, delegated by the eldest, Robert Schumann (second and fourth mvts), young Johannes Brahms (Scherzo) and Schumann’s pupil Albert Dietrich (First). The musical trio had another musical friend, violinist Joseph Joachim, to whom the gift and tribute was given. Joachim had adopted the Romantic German phrase "Frei aber einsam" ("free but lonely") as his personal motto. Thus the composition's movements are all based on the musical notes F-A-E, the motto's initials, as a musical cryptogram. Sadly the complete work was not published during the composers' lifetimes. Schumann incorporated his two movements into his Violin Sonata No. 3. Joachim retained the original manuscript, from which he allowed only Brahms's Scherzo to be published in 1906, nearly ten years after Brahms's death. The F-A-E Sonata marks the pinnacle of intensity of Brahms’s encounter with his encounter with Schumann.

Brahms began his third and final Violin Sonata in the summer of 1886 on Lake Thun, Switzerland. The D-minor Sonata partakes of the marvellous economy of expression and means that this characterizes the other chamber works of 1886. The Adagio, in D major, is a broad melody which is repeated in varied form, without contrasting or contrasted episodes. Tovey observed “Such simplicity comes of a life’s experience; it cannot be imitated by merely writing to develop it”. The Scherzo, only about 3 mins long, is the opposite to the F-A-E one; it is marked “Un poco presto e con sentimento” and described as “delicate”. It has been suggested that Brahms wrote in terms of form, harmony and phrase design. The finale of the D-Minor Sonata is a power sonata Rondo, full of pent-up energies which seem to be fully attacked by Ana María Valderrama and Víctor del Valle.

César Franck’s Violin Sonata is a complex piece, which comes from a high-Romantic period whose violin sonatas represent some of their greatest artistic achievements: Saint-Saëns, Ravel and Fauré all crystallised their most mature musical ideas into their violin sonatas. Ana María Valderrama and Víctor del Valle seem to know the balance of this sonata; as a piece of intense, Romantic writing on the one hand, and carefully wrought polyphony (listen to the canon that forms the final movement like a Bach fugue). Perhaps because Franck has a one and special Violin Sonata (1886), with many splendid melodies contrasted with vital energies, it is highly memorial.

The final piece is new to me. It is an intensely beautiful creation from Franck. Bärenreiter Ltd. notes that a separate movement from Franck's Violin, “Mélancolie”, was first published after Franck’s death in 1911, again for the same instrumentation, piano and violin or violoncello. This short piece is based on a solfège (the application of the sol-fa syllables to a musical scale or to a melody) exercise and was written at the height of the composer’s creative powers, at about the same time as his famous violin sonata.

And now the recording. Under ‘Acknowledgements’ in the Eudora’s booklet, Ana María Valderrama thanks Mr Miguel Angel Tapi, director, “for gracefully allowing me to record this album in the Mozart Concert Hall”. The Mozart Room is one of an excellent set of modern Audience Halls in Zaragoza. The surface is 1800 m², maximum length: 25 m, maximum width 14 m, and there is room for 1992 seats. It has equipment and sound control, and Audio-video recording equipment (although the Eudora’s Producer and the recording engineer, Gonzala Noqué, would be likely to bring company material to record DSD256 and 5.0 surround version).

I have reviewed most of the Eudora’s SACD and been impressed by their 5.0 multichannel, which gives the listener feeling that the musicians are sitting (or standing) in a realistic space. Ambience of the location also gives the listener quality or character given to a sound recording, by the specific space in which the sound occurs. I set up for my 5.0 to listen to Brahms and Franck, and in a few seconds I said “Mono”!. All I could hear was violin and piano sounds on top of one another (or inside). Sitting in my chair in the middle of the room, there was a flat sound from Left and Right front and no feeling of the musicians in the usual arrangement with violin in front of the piano. I could not hear any sound from front middle or back L and R. To verify this, I removed the wires to my large, flat MagnePlan speakers, left and right front. Then I checked each of the other speakers, C, Left back, Right back. With the standard volume from my amplifier and playing the Brahms/Franck disc, 3 still connected each of these were emitting only a very soft signal, and I had to put my ear right next to the front of each connected speaker. They all sound as if the music of the stage was actually outside Mozart Hall. Without changes of any other equipment, I restored the L and R front speakers and ran a different Eudora disc, and as usual it had all the expected properties for 5.0 excellently. I did a further test, playing the Brahms/Franck disc in CD alone, and there was something of a better spread of sound for the two instruments than the SACD. The CD will be the one that I listen to in future.

I can only say that in my view the playing of a disc of Brahms/Franck straight out of its folder, and to find it had faulty 5.0 with violin and piano ‘crushed’ together reduces the amount of pleasure. Perhaps there is a pressing problem in production somewere I don’t know.
At this point, I cannot fully review the SACD, and the stars only refer to my own SACD.

The sonics of the stereo DSD file are fine.

The sound levels of the rear L and R channels of the 5.0 program are very low in comparison to the front L and R channels. But that is unlikely to be a mastering or manufacturing defect; the care with which Eudora produces these discs suggests that the effect was intentional.

On the stereo DSD program, the violinist appears to be standing near the piano, and the presentation is natural; the piano chords spread out from the center of the image. In the Franck sonata, Ms. Valderrama seems to move freely, and from time to time, you can hear the violin shift further to the left of center. It's a skillful and insightful performance, and a good if very particular DSD recording.

The Franck is one of my favorite violin sonatas. My collection includes Tabea Zimmerman (on viola) and Pieter Wispelwey (on cello). Does anyone have a recommendation of another performance on violin? I've heard Franck, Debussy, Tchaikovsky - Liza Ferschtman, which seemed uncomfortably slow in the first movement.