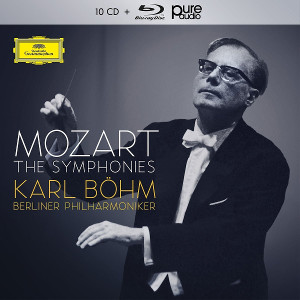 
Complete Symphonies on 1 single Blu-ray Audio for the first time! And in 24-bit Hi-Res too. Karl Böhm was one of the first conductors to set down on record his complete symphony cycle. His emphasis on rhythmic, textural and structural clarity are hallmarks of a Mozart style unaffected by fashion, and earned the epithet “timeless” even in his own lifetime.

DG collects his recordings with the Berlin Philharmoniker of the Mozart Symphonies on 10CDs and remastered at 24bit/192kHz on one Blu-ray Audio disc.
• Karl Bohm’s legendary recordings of the complete Mozart Symphonies on 10 CDs and newly remastered in 24bit/192kHz on 1 high fidelity Blu-ray Audio disc
• 60-page booklet with essays on Bohm as Mozartian by Peter Cosse; and on Mozart as a symphonist by Heinz Becker
• Limited Edition slipcase

Born in Graz, B0hm was engaged as a conductor at the Bavarian State Opera in Munich in 1921, before he was 30. Six years later he was appointed General Musical Director in Darmstadt, moving to the Hamburg Opera in 1931. From 1934 to 1943 he was in command at the Dresden State Opera. He became one of the most passionate admirers and powerful advocates of the music of his friend Richard Strauss, but it was the music of Mozart (his greatest love) which was always at the center of his own work as a conductor.

As director of the Vienna State Opera (1943–45, and again 1954–56), and unofficial “General Musical Director of Austria”, and as one of the busiest conductors at the Salzburg Festival from 1938 onwards, in the concert hall and in the opera house, he devoted all his strength and his judgement to the study and performance of Mozart – a task he carried out modestly, unassumingly, and not least with unquenchable good humor, to an advanced age.

The Austrian conductor’s emphasis on rhythmic, textural and structural clarity, and his natural, unforced approach to music-making are hallmarks of a Mozart style which was unaffected by fashion or by compromise, and earned the epithet “timeless” even in his own lifetime.

Interesting fact about this edition:
the remastering was NOT done by Emil Berliner Studios (EBS). Next month (Dec. 19 2018) Universal Japan LLC will release these recordings in two 4SACD sets (UCGG-9144 & UCGG-9148). The remastering for the SACDs is done by the EBS.

In other words: this BluRay edition (and the corresponding HR-downloads) and the upcomming SACDs use different remasterings. After my experience the EBS-remasterings (used for the japanese Universal SHM-SACDs) are far superior to the 'whoever-has-done-it'-remasterings for the DG BluRays.

A very useful warning but I wonder how Contrapunctus came upon this information. I wonder if this is the case with other Universal Blu-ray Audio releases.

Gordon, I have talked and e-mailed to Rainer Maillard from Emil Berliner Studios about this topic (and maybe, I got a bit on his nerves…). - Regarding other Universal Blu-Rays: the majority of them don't use recent EBS-remasterings (like the Universal Music Japan SHM-SACDs or TowerRecords-SACD). - One of the few exceptions is the new edition of the 9 Beethoven symphonies with Karajan from 1975-77 on BluRay: in this case Emil Berliner Studios indeed created a new remastering in Dolby Atmos.

As a rough guide I would say that ALL (non-Japan) Universal BluRays are produced with (older or unknown) remasterings without EBS-involvement. Only if the term 'Emil Berliner Studios' is clearly shown on the BluRay/packaging I would say that EBS really did the remastering.

In the end the situation is quite frustrating, because Deutsche Grammophon (Berlin)/Universal is obviously not interested using the 'prime-remasterings' from EBS (commissioned by Universal Japan), because they don't care about it. Deutsche Grammophon/Universal and Universal Music Japan LLC are totally different worlds! Strange, but true.

Thanks Contapunctus, I recently got the Kubelik Mahler Blu ray audio set and strongly suspect it is taken from old 16 bit red book transfers. I've only listened to the 1st but it is quite shrill in upper strings. Transfers I have been very impressed with are Solti Salome and Elektra. To me they sound as if they were recorded last week. I await the Karajan Atmos transfer with interest.

I had concluded that some Blu-ray Audio releases had been created from old 16 bit CD transfers. I looked at the packaging for the new Kleiber complete DG bluray + CD set and it states that the recording of Tristan was CD only and not on the Blu-ray disc because the original recording was 16 bit stereo, which they claim was the highest resolution of digital available at the time. That's an interesting statement and a surprise that they would not include it on the blu ray anyway.

Regarding old/analogue DG-recordings, I'm very happy with Universal Japan SHM-SACDs or TowerRecords (Hybrid-)SACDs - both offer quite a comprehensive information/declaration about remastering. As a headphone-only-listener, stereo is fine for me - I don't need multichannel-sound. Consequently, I don't have a Blu-ray player.

I read a comment on amazon saying that symphonies 40 and 41 were the later versions with VPO. Anyone know if that is true? I can report that Universal will release both the Bruckner and Mahler symphonies with Concertgebouw and Bernard Haitink on Blu-ray Audio in a few months time.

After listening and comparing some free sound examples on jpc, I think that Symphonies 40 & 41 are the early BPO recordings - not the VPO version from mid-70s. (The VPO recordings are a bit slower in general.)

Aastroem, regarding the upcomming Mahler & Bruckner cycles with Haitink and CGO on Blu-ray: do you have a source (e.g. link to Amazon or another seller)? These old recording cycles have been on my 'remastering wish-list' for a long time.

Conrapunctus, The Blu-ray releases of Bruckner and Mahler from Haitink are published on the Universal press site. Unfortunately it is not possible to copy the pictures. The red book Cds are at last with the original covers, but it would be a better idea to release a blu-ray disc on its own.

Just to clarify one point above, the Kleiber Tristan IS on the bluray disc, though on DG's own admission on the box it is only the original 16 bit material. Still, one advantage of blu ray for opera is that you don't have to jump up and change the record!

Interesting Breydon, I'm sure the packaging states that the Tristan in on CD and not on the Bluray disc.

Aastroem, I looked on the Universal site and could find nothing about upcoming Bluray Audio from Haitink. Do you have a link?

Gordon Lilley, it is published on their press site and you need a password to enter it. You simply have to believe me and wait for them to be published here.

Gordon, just got my copy off the shelf for you and I can see how the confusion arises; it says "Blu-Ray pure Audio : Repertoire remastered at 24 bit / 96 khz*", and then underneath "*Except Tristan which was recorded digitally at 16 bit. At the time, this resolution was the highest standard in digital recording." I can see how you would think the "except" means that the Tristan isn't on the disc, but what they meant it to mean (!) is that the Tristan isn't at 24/96. It absolutely is on there - tracks 94-122, between La Trav and Der Freischutz. Hope this helps!

For anyone else who is wondering about this set, I can say that to my ears and through my equipment, the Beethovens are a significant improvement on the 2004-ish DG issue (though of course without a surround mix) and the Brahms likewise relative to the Esoteric reissue. All have much more clarity within the orchestral picture; I've never much cared for any of these as recordings in the past, but they are now vastly more enjoyable - rather like my experience with the DG SHM-SACD's of the Mravinsky Tchaikovsky where on all previous issues I had heard the sound precluded my enjoyment of the performances. I can't really tell much difference between the Schuberts in this set and the Japanese SHM-SACD which I also own - both excellent, I would say. I haven't yet played the operas but am hopeful that the 3 analogue recordings will also be enhanced in the new remastering.

Regarding the current discussion about remasterings for the recent DG bluray issues, I would say that whoever has done this set has done a really good job for a very reasonable price.

The Back Cover has 2 errors

About the mastering as I read it from the Booklet

Mastered by Emil Berliner Studios (CD1-10). So the CDs are EBS masters

So, we have 2 different masters or MSM Studios used EBS masters to process them into BR-Audio?

Thank you Contrapuntus for the information on the different masterings of the same recordings. It's terrible that the label is not being 100% honest about it. I saw the two different editions of Bohm's Mozart on the E-Onkyo Japan web-site and wondered why there were two editions and now it makes sense. I would much rather have the Emil Berliner remastering as well.

So what masters did they use for the Amadeus Quartet's Beethoven String Quartets???

Thank you Contrapuntus for the information on the different masterings of the same recordings. It's terrible that the label is not being 100% honest about it. I saw the two different editions of Bohm's Mozart on the E-Onkyo Japan web-site and wondered why there were two editions and now it makes sense. I would much rather have the Emil Berliner remastering as well.

So what masters did they use for the Amadeus Quartet's Beethoven String Quartets???

About the Beethoven Quartets with Amadeus Quartet

The booklet has this info (copied as it is)

Regarding all the mess and confusion about remasterings of the 'yellow label' (Deutsche Grammophon), I think, it's important to remember that Emil Berliner Studios (EBS) and Deutsche Grammophon are completely separated companies since 2008. After my few contacts with EBS, I reckon that the relationship between DG and EBS is not as good/close as it was before 2008. During the recent years Deutsche Grammophon commissioned increasingly other studios like Polyhymnia or MSM for remastering work. - Only Universal Music LLC Japan (another independent company) stick by EBS.