Williams: At the Movies - Junkin 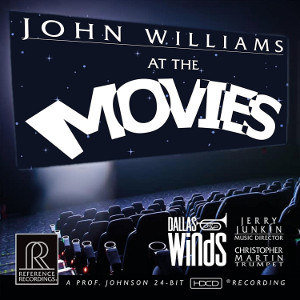 John Williams: Olympic Fanfare and Theme, The Cowboys Overture, Superman March, Close Encounters of the Third Kind (excerpts), With Malice Toward None (from Lincoln), Star Wars (main title), Imperial March (from The Empire Strikes Back), Scherzo for X Wings (from Star Wars: The Force Awakens), The Jedi Steps and Finale (from Star Wars: The Force Awakens), Theme from J.F.K., Adventures on Earth (from E.T.: the Extra-Terrestrial), March (from 1941), The Star-Spangled Banner


Music to inspire the world for generations!

John Williams is a game changer. Early in his career he crossed the lines between music that was “art” and music that was “commercial,” and never looked back. He is one of the best known, most awarded and most successful composers in US history, and his name is inextricably connected to outstanding music for films. He has written scores for over 100 films, and his massive list of awards includes 51 Academy Award nominations and five wins, as well as 24 GRAMMY® awards. A less­-known fact is his fondness for writing, arranging and conducting wind band music. This collection of his film music includes favorites from Star Wars, Superman, JFK, ET and many more, arranged for concert performance by top­-level wind ensemble.

Brilliant performances by the Dallas Winds, have been captured in spectacular audiophile sound by Reference Recordings’ own award­-winning engineering team: Keith O. Johnson and Sean Royce Martin. John Williams At The Movies features soloist Christopher Martin, principal trumpet of the New York Philharmonic. The recording was made in Dallas Texas, in the Morton H. Meyerson Concert Center, one of the world’s greatest concert halls, and the site of an annual Dallas Winds concert featuring the film music of John Williams.

John Williams At The Movies is our first wind band recording to be released as a hybrid SACD. The disc contains stereo SACD, 5.1 Surround SACD and a stereo compact disc layer encoded with HDCD, and is simultaneously being released as high resolution and standard resolution digital downloads and streams. A two­LP set will be released later in 2018. This is our 18th album with The Dallas Winds, and is a project of which we are extremely proud, that was years in the making.

The Dallas Winds is the leading professional civilian wind band in the United States today. In his 25th season as Artistic Director and Conductor of the Dallas Winds, Jerry Junkin is recognized as one of the world’s most highly regarded wind conductors. He has also served as Music Director and Conductor of the Hong Kong Wind Philharmonia since 2003, and Principal Guest Conductor of the Senzoku Gakuen College of Music Wind Symphony in Tokyo since 2007. Additionally, 2017­-18 marks his 30th year on the faculty of The University of Texas at Austin, where he holds the Vincent R. and Jane D. DiNino Chair for the Director of Bands.

For over 40 years, Reference Recordings® has been one of the most innovative and respected independent labels in the music business. Reference Recordings releases have been highly praised for their dedication to high quality sound in the service of great music. Founder Tam Henderson (1998 GRAMMY® nominee for Producer of the Year), was joined in 1978 by engineer Keith O. Johnson. Some 140 projects later, RR is still recording what many consider to be the finest­-sounding classical, jazz and blues discs in the world.

Each new release from the Reference Recordings label is anticipated with a tingle of excitement, promising not just an aural treat for audiophiles but also high musical values, and this latest sonic spectacular featuring the film music of John Williams is no exception. For decades Keith O Johnson, the doyen of recording engineers, and his team have been working their magic in recording studios and concert halls across Europe and the USA with consistently breathtaking results as can be experienced on this 5.1 multi-channel SACD recorded at the Meyerson Symphony Centre, Dallas, July15-17, 2016.

For listeners of all ages the music of John Williams needs no introduction. His prolific output includes over 100 film scores no doubt making the task of selecting the titles for this album an especially challenging one. But while some may regret the absence of say 'Jaws, 'Schindler's List' and 'Raiders of the Lost Ark' to name just three of his most memorable scores, the generous(75.43) selections here have been chosen with imagination to provide a well contrasted programme that reflects the many aspects of this composer's output for the film genre.

The performers are the Dallas Winds conducted by their long-time Artistic Director Jerry Junkin who are no strangers to Reference Recordings as this represents their 18th album for the label. The compliment of musicians is considerable – a total of 65 instrumentalists that in addition to the wind and brass include harps, string basses, piano and an organ – providing the panoply of colour and timbre that this music requires. There is little doubt that John Williams's stirring and richly melodic scores are well suited to these arrangements for wind band and these marvellous players relish each and every opportunity the composer gives them. The stirring marches and brass fanfares of the 'Star Wars' excerpts have the visceral impact you might expect, but equally impressive are the performances of the more reflective music such as the noble Coplandesque 'Theme from J.F.K.' and 'With Malice Toward None from Lincoln' in which the haunting trumpet solo is is eloquently delivered by Christopher Martin, the Principal Trumpet of the New York Philharmonic.

The final track on the disc is not taken from a movie score but is a setting of 'The Star-Spangled Banner' that John Williams made in 2004 Here the seven strong percussion section of the Dallas Winds have a field day with an ending that will provide a thrilling work-out for any hi-fi system. Make sure the neighbours are out when you play it!

As always with Reference Recordings presentation is of a high standard. The 20 page accompanying booklet includes informative background notes on the featured films by Gigi Sherrell Norwood as well as performer biographies, a complete listing of the Dallas Winds personnel etc.
It is worth pointing out that this album is available as a 2-channel download in various resolutions (44.1kHz /16bit up to 176.4kHz /24 bit FLAC) but the only way to experience to the full 'Prof'. Johnson's nonpareil surround sound mix is to buy the physical media.

A future award winner? Without doubt.