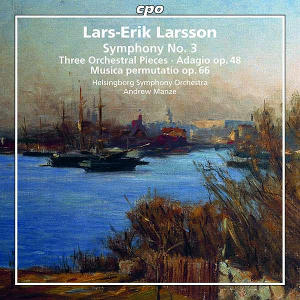 Our recording of Lars-Erik Larsson’s symphonic works is now finally complete. Vol. 3 features the Third Symphony by this composer, who along with Dag Wirén even in today’s Sweden continues to number among the most popular composers of the classical modern period. This also applies to Larsson’s third symphony, a four-movement work written at the end of World War II. It is clearly audible that in this majestic orchestral genre he tended to a style with closer ties to the tradition than he did in his works of smaller format. At the same time, however, this symphony is also his strongest and most individual contribution to this genre. In view of its flawless formal proportions, thorough mastery of the highest quality, and characteristic invention, it is really difficult to understand why Larsson withdrew this symphony shortly after its premiere and retained only the finale, now with a new, lengthier slow introduction and the title Concerto Overture No. 3. This finale is in fact a movement of especially captivating elegance, a unique humorous quality, and outstanding craftsmanship that is very much able to hold its own and represents some of the composer’s best and most typical qualities.

This is the third and final release from Andrew Manze and the Helsingborg Symphony Orchestra in CPO's valuable survey of the orchestral works of Lars-Erik Lassson (1908-1986). The first two volumes were reviewed by me in 2014 Larsson: Orchestral Works, Vol. 1 - Manze
and 2015 Larsson: Orchestral Works, Vol. 2 - Manze , but why collectors have had to wait almost three years for this latest release to appear is a mystery since the music on all three volumes was recorded in 2011!

Though not a prolific composer Larsson's compositions encompass most musical genres – orchestral, works for solo instrument, chamber and opera. His music spans late romanticism, neo-classicism and he even adapted aspects of serialism to his own needs. It is perplexing as to why this fine composer has not gained greater popularity outside his native Sweden as his best music possesses the wide range of distinctive qualities that one associates with many of the greatest Nordic composers, Sibelius, Nielsen, Stenhammar et al.

As with Volumes 1 and 2 the pattern is the same here. A symphony (in this case No.3 from 1944-45) is coupled with compositions from a different period in the composer's compositional career.

Larsson's Symphony No.3 in C minor Op.34 the main work on this SACD is an arresting and dramatic work. As Christoph Schlüren, writer of the most informative liner notes suggests, the shade of Beethoven's 5th is evoked by the driving five note theme of the opening 'allegro con brio'. Contrast arrives with a wonderful romantic and expansive melody on the horns before both themes are satisfyingly developed with Larsson's customary skill before reaching a surprisingly curt ending.

The deeply felt slow movement is full of yearning lyricism and warmth while the brief scherzo that follows possesses both a delicacy and urgency beautifully conveyed by the crisp articulation Manze elicits from his Helsingborg players. The finale begins with a brief solemn introduction that quotes the aforementioned horn theme from the first movement before the arrival of the scampering allegro molto. The music dances along with considerable wit and boisterous exuberance that will delight the receptive listener.

This is only the second commercial recording of the Symphony since its premiere in 1946. Larsson's self doubt and sensitivity to criticism led to his withdrawal of the work immediately after its premier in 1946 (as was the case with his earlier two symphonies) though the finale was given a new life in 1948 as Concert Overture No.3 (Op.34).

The 'Adagio for String Orchestra' Op. 48 and the 'Three Orchestral Pieces' Op. 49 that follow were composed in the 1960s and are examples of his free use of 12-tone style, though they are a world away from the composers of the 2nd Viennese School. On this disc the 'Three Orchestral Pieces' are placed before the 'Adagio for String Orchestra' rather than the chronological order ( Op.48 then Op.49) as Andrew Manze considers that the final minutes of Op.49 lead naturally into the opening of Op.48.

The final work on this disc is 'Musica permutatio for Orchestra' Op.66. Dating from 1980, it was commissioned by Swedish Radio and was Larssson's final work. It demonstrates that the composer had not lost his creative spark nor his ability to handle contrapuntal complexities while at the same time fashioning an inventive piece free from dry academicism.

Andrew Manze achieves the same clarity of texture and focus in these pieces that are familiar from his many outstanding period performances, and the Helsingborg Symphony Orchestra respond to his direction with committed playing throughout.

The works were recorded in the Konserthuset, Helsingborg, Sweden (August 16-18, 2011 (1-4) September 20-22, 2011 (5-9) by the experienced team of Lennart Dehn (producer) and Torbjörn Samuelsson (engineer) and, as with the previous issues, the sound is clean, spacious and well balanced.

Larsson's appealing and fastidiously fashioned music deserves much wider dissemination and it is to be hoped that, thanks to the advocacy of Andrew Manze, his fine Helsingborg musicians not to mention CPO's excellent recording, this will be soon expedited. 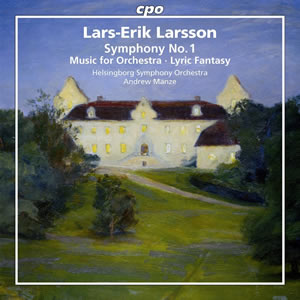 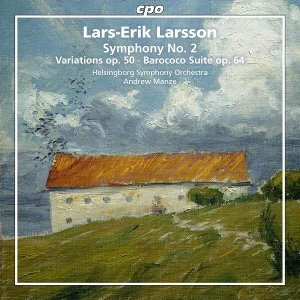