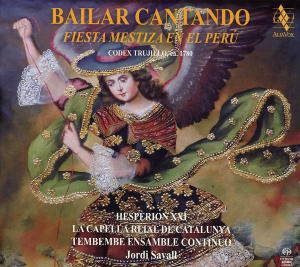 
The twenty pieces comprising the musical collection in the Codex Trujillo del Perú are an exceptional case in the history of the indigenous music of the New World. This collection of tonadas, cachuas, tonadillas, bayles, cachuytas and lanchas offers a glimpse of the repertory native to the traditions of the country, as indicated by the text of one of the cachuas sung “al uso de nuestra tierra” (“according to the customs of our land”) and in particular the songs and dances favoured by the popular classes who lived in the “Viceroyalty of Peru” at the end of the 18th century.

These performances, captured from what were clearly entrancing concerts, present the 1780 Codex Trujillo del Perú, and what life-enhancing music it is! One or two works are also heard on Les Routes de l'Esclavage 1444-1888 - Savall but these are fresh performances with different instrumentation. What is perhaps most extraordinary about the performances is how well those musicians familiar to legions of the Baroque (and before) inhabit this folk-inspired music so idiomatically; the refinement of some of the singing & playing occasionally betray their sophisticated training but this never jars because they capture the mood so convincingly.

The extra energy that live performances often give off fortunately survives the transposition to a disc and, perhaps most importantly, repeated listening. There is wonderful theatricality in the sonic presentation too with the procession onto the stage at the beginning vividly recreated. Although not quite going into full Los Incas territory, this instrumentation is evoked throughout this disc. It seems invidious to single out any one of the performers but Jordi Savall must take credit for (once again) integrating such disparate musical heritages, coalescing the sound worlds into a convincing and hypnotic whole and putting his time and energy behind this repertoire.

The recording is of the same exalted standard as the music making and as we have come to expect, several high quality, lengthy essays accompany the disc.

This listener found it difficult to sit still, so hypnotic are the rhythms and it is easily one of my discs of the year - enjoy (with El Nuevo Mundo)!