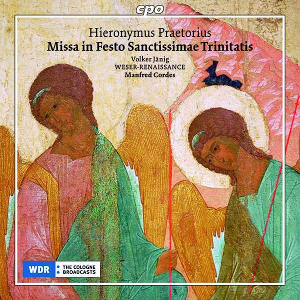 
The program Missa in Festo Sanctissimae Trinitatis presents the reconstruction of a main religious service in one of the principal Hamburg churches at the beginning of the seventeenth century; it consists of works for ensemble and organ by the composer Hieronymus Praetorius, who was the organist at the Church of St. James in Hamburg from 1582 until his death in 1629. In between, the liturgical components of the Mass that were performed monophonically are heard as they have been transmitted to us in the regulations for religious services then in effect in the Hanseatic city of Hamburg. The search for a suitable instrument led to the choice of the swallow’s nest organ in St. Mary’s Church in Lemgo; it may be regarded as a model example of the Northern German organ building tradition and has a mean-tone temperament ideal for the period of composition, characteristics, and stylistics of the selected repertoire. During the initial decades of the seventeenth century Hieronymus Praetorius continuously occupied a special place among Northern Germany’s musicians. He was the most distinguished and most highly esteemed composer and organist of the Praetorius family of Hamburg, whose members served for more than a hundred years at one or more of Hamburg’s principal churches.