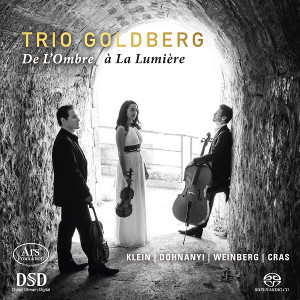 Putting together a programme of different composers and compositions is often best done under a common banner in order to create coherence. This time it is ‘de l’ombre à la lumière’ (from shadow to light). Searching through the liner notes I did not find any clue as to why this title was chosen. Have they left it to the listener to divine? If Gideon Klein’s String Trio, written in 1944 shortly before he was transported from Theresienstadt (Terezin) to Auschwitz/Fürstengrube, is the dark part, would then the String Trio of the successful French naval officer Jean Cras be the light? And where to position Dohnanyi, fleeing Nazism to the United States, and Weinberg to the Soviet Union? Difficult to tell. By want of anything better I suggest that we leave it to Shakespeare’s brilliant remark: “What’s in a name”, and listen to what composers and musicians have to tell. Because, with or without further explanation, a rose is still a rose and the music will still sound as it does. Besides, there is much, very much to appreciate!

Klein’s oeuvre is small, mostly composed during captivity in Theresienstadt and recovered from a forgotten suitcase in 1980. His Trio for Strings can, as pointed out in the excellent and detailed liner notes, only fully be appreciated in relation to the anguish he must have undergone knowing that life would sooner or later end in an extermination camp. (The exact circumstances of his untimely death at 26 are not known). Trio Goldberg play this relatively short piece with terrifying precision, mixed with sentiments of defiance and nostalgia; portraying with large strokes a masterpiece that can sit next to the very best in its genre. This is a true and extraordinary well chiseled statement in honour of an unquestionable genius: Gideon Klein. Most impressive.

Both Dohnanyi’s Serenade for String Trio Op. 10 and Mieczysław Weinberg’s Trio Op. 48 have been successfully recorded in high definition by the Czech Beethoven String Trio (Pavel Hůla, Josef Klusoň, Michal Kaňka) on two separate discs: Dohnanyi: Chamber Music - Kocian Quartet, Beethoven String Trio and Weinberg: Cello Sonatas, String Trio - Kanka, Coelho, Beethoven String Trio. I was anxious to find out how the Goldberg’s would measure up in comparison. After several listening rounds I’m pleased to confirm that not only their playing is in many aspects comparable to what these famous Czechs have set down, but also that the recorded quality of this new release is markedly better, notably the typical resonance of the cello comes out very well.

In the past often compared with Brahms, Dohnanyi is now widely recognized as a composer in his own right. His long neglected chamber works may not yet be core repertoire but are surely worth attentive listening. And for those less familiar with this Slovak-American composer, I would recommend his tuneful Serenade as an excellent starting point. Certainly in the impeccable rendition by the Goldberg’s. The same applies to Weinberg’s Trio. This Polish composer was once befriended with Shostakovich and his style show similarities, though his musical palette is more melodious and certainly more accessible.

The final work, a string trio by the French sailor-composer, Jean Cras, is new to the Hi-Res catalogue and to me as well. In spite of his responsibilities on the way to become a rear admiral, he must have had sufficient time to put his many impressions into music. And not only that, he ably used techniques like putting counter melodies in different tonality in an amazing second movement. And I’m sure the Irish and the Scots will revel in the Celtic dance motives in the final. There is more to say about this serious piece of work, but I would advise you to listen (and read the notes) for yourself. A real discovery.

By now you may wonder: “Who are these people”? All three are key members of the Orchestre Philharmonique de Monte-Carlo of which, in 2000, the violinist, Liza Kerob, obtained the prestigious title of ‘Super Soloist’.

With this first release with ARS Produktion they have, as far as I’m concerned, catapulted themselves into the top echelon of modern string trios, giving ample proof of their sensitive yet impressive musicality, whilst showing an extraordinary degree of team spirit. In short: whatever the Goldberg’s touch will turn into Gold!