Due to lack of space on the single disc, there are no multichannel tracks for Preludes 10-11 of the second book. Per the case, the missing tracks will be available from ...

In case you did not know, I discovered that the entire performance is recorded in HD (1080P) video and available on the Concertgebouw website. Concert recorded 1 April 2016. ... 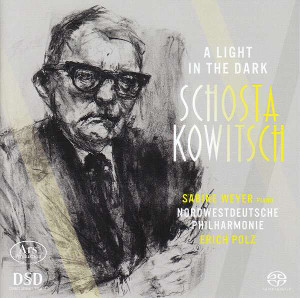 Shostakovich in a different light, or, as the subtitle says: ‘A Light in the Dark’. The Festive Overture surely suggests that much. It was written in two days in 1954 for the 37th commemoration of the October Revolution in the Bolshoi Theatre. To please the State critics? Who knows.

Shostakovich was an enigmatic person and we can never be sure what really is behind his compositions. The second piano concerto is a case in point. It is, like the Festive Overture, positively neo classical in its setting. He wrote it for his son’s graduation from the Moscow Conservatory. But if the objective was to help his son Maxim to succeed, why would Shostakovich write to his fellow composer Denisov “I compose badly. I have finished a piano concerto of no artistic or spiritual value”? It is widely assumed that he wanted to forestall any criticism. At first sight the concerto is, indeed, simplistic and so very different from the compositional quality of his Quartets and Symphonies. But that being so, it can still be seen as a masterpiece in that it has sufficient elements to make his son’s graduation a success, like brilliance and catching melodies, whilst at the same time demonstrating that this was all Shostakovich thought the cultural authorities worthy of. If so, it follows that there are different ways to approach the concerto, with or without double meaning. That is: following the score ‘as is’, or unravel the undertone of ‘laughing at those culture bosses' simple minds’.

Sabine Weyer seems to be doing both by seeking the extremes between lyricism and ‘bite’. And that is, in my view, what makes her rendition special. In the second movement she sets down a degree of sheer beauty, reminiscent of Rachmaninov’s second piano concerto (not that Shostakovich has been copying, because he always is and firmly remains his own man) sure to lure examiners, critics, cultural apparatchiks into positive recognition. In the outer movements Weyer displays a high degree of involvement, but during moments of excitement and biting expression, especially in the first movement, she doesn’t always facilitate the accompanying task of the conductor to keeping synchronization under control. I find the orchestral playing nonetheless of a high standard and the overall result under the baton of Erich Polz, the young Austrian conductor, on this occasion at the rostrum of the Nordwestdeutsche Philharmonie, convincing enough for a first rate performance at top provincial level.

Is Shostakovich’s ninth a joke? According to him it is a ‘pseudo comedy’. If it is a comedy than I think that a tragic comedy is closer to the truth. Written at the end of the Second World War (November 1945) it didn’t meet with the approval of the Ministry of Culture. No heroism, only light hearted stuff. In that sense it is right to put it under the title ‘A light in the Dark’, but upon closer listening, it is not much different from the two fore going War Symphonies. Only this time Shostakovich uses a different language, which I think Polz has understood. Marching puppet armies in the first movement and complete desolation in the second. No heroism for the Party, only misery for the people.

The comedy continues with subtle mockery and hidden cynicism till the final blow at the end against all warmongers; all of this duplicated by the inspired players of the Nordwestdeutsche Philharmonie, one of those top provincial orchestras Germany disposes of, in unmistakable Shostakovich sound.

Polz is generally swifter than most of the Hi-res competition, notably the acclaimed Kreizberg version with the Russian National Orchestra, but his account is nonetheless quite remarkable and beautifully captured by the ARS Produktion engineers, Schumacher and Rust.

Nice review Adrian and very quickly off the mark. Interesting coupling as well although I confess to knowing nothing of this orchestra or conductor

Thanks John.
Concerning your remark about the Nordwestdeutsche Philharmonie, this was a stepping stone to fame of Andris Nelsons (Principal Conductor of Nordwestdeutsche Philharmonie in Herford, Germany 2006-2009) and I take it that he has done a lot to lift its quality. Erich Poltz is Austrian and said to be one of the coming generation of talented young conductors. And what's more: He comes from a family of Austrian wine makers and studied wine making in Austria, and in France with famous wine makers from the Bourgogne region. Wonderful combination I'd say.

Having just spent an informative and exciting motoring holiday in Southern Germany, we are now much more aware of local orchestras such as the Bamberg and the Württembergische Philharmonie, excellent orchestras indeed who have graced our SACD collection for many years with some lovely discs.

The beer is also quite outstanding.

An incandescent and exhilarating account of Shostakovich's 9th that will please most. The disc is quite imaginative in that it presents you with a full traditional concert programme.

Polz and his players are in complete control of this controversial work and in my view captures the underlying relief from despair despite what the Soviet musical authorities thought at the time. This is the best version on SACD in my view, far more up-lifting than Kreizberg. The Festive Overture is a fitting and equally meritorious opening to the concert,

Generally, the playing of Sabine Weyer is deeply expressive and sensitive but in places she seems to be playing on despite the orchestra, co-ordination seems a little wayward in places resulting in moments of slight hesitation and loss of momentum. I do not want to exaggerate this but the art of accompaniment is not an easy one and requires many rehearsals.

Lots to enjoy here and a purchase that you will not regret.