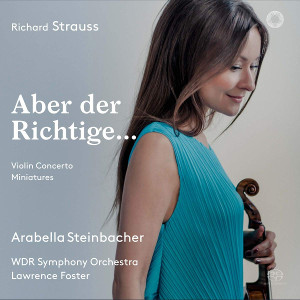 
This album is violinist Arabella Steinbacher’s tribute to the favourite composer of her family household. The music of Richard Strauss has played a crucial role throughout her life. As great Strauss lovers, her parents named her after the main character of Strauss’ opera Arabella, and the family house was filled with Strauss melodies, often sung live by famous singers accompanied by Steinbacher’s father, who was a solo- répétiteur at the Bavarian State Opera in Munich.

The album starts with a piece that Strauss originally conceived for violin and orchestra, the rarely-performed Violin Concerto in D minor, composed when he was still a teenager. Two other early instrumental works – the Romanze (usually performed by cello and orchestra) and Scherzino (an arrangement of an early piano piece) – are also featured on this album. The rest of the repertoire consists of famous Strauss songs (Zueignung, Wiegenlied, Traum durch die Dämmerung, Cäcilie), “sung” on Steinbacher’s violin. The apotheosis of this highly personal programme is Steinbacher’s rendition of “Aber der Richtige…”, the celestial duet from Arabella. Arabella Steinbacher, a multiple award- winner with an extensive PENTATONE discography, is accompanied by the WDR Symphony Orchestra, conducted by Lawrence Foster.

It comes as no surprise to learn that Arabella Steinbacher’s parents, as ardent lovers of the music of Richard Strauss, named their daughter after the eponymous heroine of the composer’s tenth opera composed in 1933. This album entitled ‘Aber der Richtige...’ is conceived as the violinist’s personal tribute to a composer she greatly admires and was recorded at the Kölner Philharmonie (23-24 and 26-27 May 2017) by West Deutscher Rundfunk engineers.

The main work on this SACD is Strauss’s early ‘Concerto for Violin and Orchestra in D minor Op.8’, written in 1881-1882 when he was just 17 years old. Though an impressive achievement for a teenager it shows little or any traces of his future genius, its style being modelled largely on Mendelssohn, Bruch and Schumann.

Steinbacher’s gives an ardent and beautifully executed account of the long first movement, receiving splendid support and playing of both great vitality and finesse from the WDR Symphony Orchestra directed by Lawrence Foster. The song-like ‘Lento ma non troppo’ that follows benefits from the violinist’s richness of tone and her hushed ethereal playing that together perfectly capture the movement’s sense of repose. Naturally she dispatches the high jinks of final Rondo with all the winning virtuosity and crisp articulation that one could wish for. It is also pleasing to note that throughout the balance between soloist and orchestra on this recording is very natural with no highlighting of the former as is so often the case on many concerto recordings. Altogether a most recommendable version of an admittedly minor work.

Regrettably Strauss in his long career composed just two solo violin works; the concerto discussed above and the ‘Sonata for Violin and Piano in E flat Op18’. Arabella Steinbacher has already recorded a lovely account of the latter for PENTATONE Franck, Strauss: Violin Sonatas - Steinbacher, Kulek so inevitably the rest of her programme on this disc consists of arrangements for violin and orchestra of pieces not conceived for this instrumental combination and described here as “Miniatures”.

The transcription of the early ‘Romance in F major’ for cello and orchestra certainly loses little when transferred to the violin, and Steinbacher’s warmly expressive reading does full justice to this melodic composition. The arrangement by Peter von Wienhardt of the fourth of Strauss’s ‘Five Piano Pieces Op.3 also sparkles thanks to the soloist’s zestful playing. The remaining works on the disc are transcriptions of four of Strauss’s most well-known songs and the aforementioned ‘Aber der Richtige...’duet from Arabella.

Few would argue that Strauss’s vocal writing, especially for the female voice, is one of his greatest achievements, as can be evidenced throughout his extensive Lieder and operatic output. Though one can not deny the ravishing beauty of Arabella Steinbacher’s renditions, it must be admitted that the violin is no substitute for the range, power and unique qualities of the human voice in these songs. That noted, the many admirer’s of this artist’s recordings need not hesitate in adding this most enjoyable SACD to their collections.

Not for me then Pentatone.

Not for this constituency then, Bill?

Based on your reaction to the Karayev disc I'd say not John. But who knows, this is clearly a disc borne of love for the composer and Steinbacher's a fine player and like I said back on that Karayeb thread there's always room for some light end of day music, so....

Kirill Karabits is keen to promote the works of composers from his part of the world that are little known in the West. Viewed in that light the Karayev disc amounts to rather more than a "Greatest Hits" volume.

At the most recent Bournemouth SO subscription concert the audience was treated to an 'Ukrainian' evening in a programme including Glière's "Les Sirens" and Prokofiev's "War & Peace" Suite both of which are wonderfully attractive pieces of music but which have never appeared on SACD, indeed rarely on CD either.

The World Premier of Mark-Anthony Turnage' s new work "Testament" that reflects the calamity of the conflict in Eastern Ukraine and explores the fate of refugees, completed the programme.

It's a better than evens bet that the KK / BSO's next Chandos disc will offer us further insights into Eastern music. In the meantime I will be lobbying to see if the two works mentioned earlier can be recorded by Chandos on SACD.

only 4 stars for performance ? AND sound ?

“Steinbacher’s gives an ardent and beautifully executed account of the long first movement, receiving splendid support and playing of both great vitality and finesse from the WDR Symphony Orchestra directed by Lawrence Foster. The song-like ‘Lento ma non troppo’ that follows benefits from the violinist’s richness of tone and her hushed ethereal playing that together perfectly capture the movement’s sense of repose. Naturally she dispatches the high jinks of final Rondo with all the winning virtuosity and crisp articulation that one could wish for. It is also pleasing to note that throughout the balance between soloist and orchestra on this recording is very natural with no highlighting of the former as is so often the case on many concerto recordings. Altogether a most recommendable version of an admittedly minor work.”

So the star with-held relates to the performance by the composer as he set his ideas to paper?

Bruce, weighing Arabella’s musical merits is personal, but as far as the sound is concerned Graham’s stars seem to me correct. Look at Pentatone’s site where it says (premium & master quality download): “Sorry, this file type is not available for download due to the recording quality”.

Tom Service writing in the Guardian:

"One of the huge problems with classical CD reviews, in my view, is that if you read the BBC Music Magazine or Gramophone regularly, you're left with the impression that, with certain extreme exceptions, the vast majority of everything that's released under the banner of serious classical recordings is jolly spiffing marvellous. Take any recent edition of the BBC Music Mag, where handfuls of reviews are given the ultimate imprimatur of five red stars for "performance" and five more for "sound". You think that these recordings ought, therefore, to be world-shattering, life-altering artefacts of transformative sonic brilliance, only to discover they're talking about Marin Alsop conducting Dvorák, or another release of undiscovered Granville Bantock orchestral music. Nothing against Marin or Dvorák (or even Bantock), but for me, if a CD is going to receive an accolade of transcendent perfection, there's just no way there should be more than two or three a year, and certainly not dozens a month."

For some years now reviews on this site, including my own, have been guilty of the above as we compared the hi-rez sound on SACD with that of most CDs. Any attempts to redress the balance by withholding a star or two is interpreted by some as meaning the recording or performance or both are not worth bothering with - patently nonsensical with subjective opinions.

I tend to agree, fewer 4 1/2 or 5 star reviews might give a better indication of what reviewers here think is really great and what merely very good. But ratings are complicated by the fact that there are no explicit guidelines. Some classical reviewers here I think tend to downgrade a performance if they don't consider the music significant enough or not to their taste (too lightweight? or contemporary music that's badly composed?). Should performance ratings be a measure of overall personal enjoyment, or should they attempt to be a combination of enthusiasm and potentially more objective criteria such as how the music/performance is remarkable in the context of its genre/style, or in general? Should sound be rated on an absolute scale or one weighted by factors such as age and (maybe) sound source? No 50 or 60 year old stereo recording (not to mention mono) is going to sound quite as accurate as the best being done today, but it may still give great pleasure. And then there are differences in how people listen (stereo, m/ch, headphones), what parameters/qualities they value most in sound reproduction, and how resolving their equipment is. My experience as I continue to upgrade playback is that the better my system gets the more I can enjoy many less-than-good recordings (including 80s digital if they were decently mic'd and you can hear into the music enough). Upgrading my SACD playback to the Marantz SA-KI Ruby has made a really big difference and I'm sure up-converting redbook to native DSD for chipless d/a conversion has a lot to do with it. Of course a high-res recording or transfer still sounds better, but the gap has been closed a bit.

I think of ratings as just a convenient shorthand to try and sum up one's response. More important is that reviewers make explicit why and how they value a recording, and generally what their expectations of high-res are. Maybe each of you could write a paragraph or two about your listening set-up/preferences, personal enthusiasms, and how you rate?

Each recording must stand or fall on its own merits. The very idea of quotas is anathema to our enjoyment of a classical recording. No matter what other reviewers may say the success of a recording remains very much a matter of personal taste and judgement.

My earlier post relates mostly to what I perceive as a disconnect between the verbiage which I copied, and the number of stars issued for performance. I should have omitted the question regarding sound....and I thought about that a bit before submitting my comment.

Had Graham felt this is a 5 star performance, how would he have, (how could he have) described it differently? 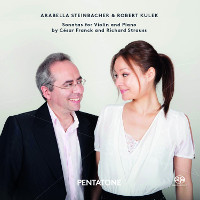