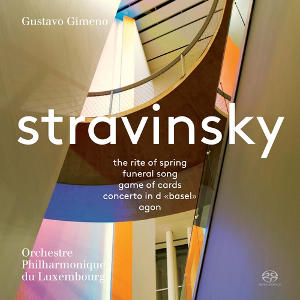 This double album offers a testimony to Stravinsky’s overwhelming musical heritage, covering all the phases of his creative life. Igor Stravinsky (1882-1971) is twentieth-century music! More than any other composer, he continued to develop his compositional style throughout his seven-decade-spanning career, innovating and adopting all the most important musical trends of his century. Historically, the musical journey starts with one of the first recordings of the recently rediscovered Funeral Song (1909), composed as a tribute to his teacher Rimsky-Korsakov. The next phase in his development is represented with the raw but tremendously refined Rite of Spring (1913), Stravinsky’s most famous work that created a scandal at its Paris world premiere, and immediately turned him into a star. His Neoclassical style is showcased by Jeu de cartes (1937) and the Concerto in D (1947), whereas Agon (1957) presents Stravinsky’s original take on Schoenberg’s serialism.

This multifarious repertoire is performed by the Orchestre Philharmonique du Luxembourg and their Music Director Gustavo Gimeno, who continue their acclaimed PENTATONE series of composer portraits that already featured monographs of Shostakovich, Bruckner, Ravel and Mahler.