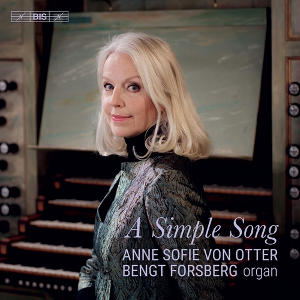 
A brief glance at the list of contents is enough to reveal who the singer is – only Anne Sofie von Otter could have come up with a programme as varied and wide-ranging. And only von Otter could hold it together seamlessly by finding the resonances between these very different pieces, and bringing them out with a rare ability of embracing different singing styles and expressive registers: to paraphrase Bernstein in his A Simple Song, Anne Sofie von Otter never fails to ‘sing like she likes to sing’.

From Liszt to Pärt and from Mahler’s Resurrection Symphony to Richard Rodgers’ Sound of Music, von Otter is supported by her long-time accompanist Bengt Forsberg, here at the organ instead of his usual piano. At various points in the programme they are joined by a number of musical friends, in the organ loft of St James’s Church in central Stockholm – the very church where the young von Otter began her singing career as a chorister and, together with Forsberg, gave one of her very first public concerts.