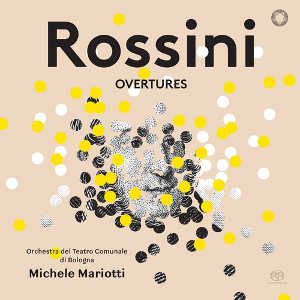 From the moment they were performed, Gioachino Rossini’s overtures have enjoyed the status of colourful, elegant orchestral showpieces. With their sweet cantilene, their rich harmonies, their brilliant orchestration, and their powerful and exciting rhythmic drive, these overtures encapsulate all that was modern, exhilarating and electrifying in Rossini’s music, yet maintain their freshness and attraction to modern audiences. This album features a collection of Rossini overtures, taken from less well-known operas such as La Scala di seta, Tancredi, La gazza ladra, Matilde di Shabran and Semiramide, as well as from the classic comic operas L’italiana in Algeri and Il barbiere di Siviglia, concluding with the preludes to Rossini’s French operas Le siege de Corinthe and Guillaume Tell, in which the composer explored musical Romanticism.

The overtures are performed by the Orchestra del Teatro Comunale di Bologna, which has played a seminal role in the Rossini renaissance of the last three decades. The orchestra is led by its Musical Director Michele Mariotti. Being born in Rossini’s native town Pesaro, Mariotti cherishes a life-long affinity with the city’s most famous son, and is commonly considered as one of the outstanding Rossini conductors of his age. He frequently works with the world’s most prestigious opera houses.

Recorded in May 2018 at the library of the Convento San Domenico in Bologna, Italy, DSD 64fs

Somewhat incredibly, this is the first (exceptionally generous) disc of Rossini overtures recorded in modern, hi-definition multichannel sound to be issued in any format.

Ivan Fischer has notched up 3 across two discs (Rossini: Instrumental Music - Fischer and Beethoven: Symphony No. 7 - Fischer) that are well worth a listen with Andrea Battistoni including William Tell on Mascagni, Rossini, Puccini, Verdi: Operatic highlights - Battistoni (again, well worth a listen from someone who seems be doing great things in the opera house). All of these are included on the current disc but have different conceptions to Mariotti. Regrettably, Rossini: Overtures - Pappano was issued in stereo and Benda's survey of all Rossini's overtures (Rossini: Complete overtures, Vol. 1 - Benda and Rossini: Complete overtures, Vol. 2 - Benda) is remastered from stereo recordings - direct sonic comparisons to Schubert: Complete overtures - Benda shows the limitations of the creditable job Naxos attempted. Arguably the only direct competitor to Mariotti is also on Pentatone from Sir Neville Marriner (Rossini: Famous Overtures) which shares 4 overtures with this one but are performed very differently.

Mariotti's Bologna forces have a well-known, rich heritage in this repertoire as does Mariotti himself and together give us wonderfully fresh accounts of what must be extremely familiar music to all involved. Compared to Marriner's accounts of Il Barbiere, L'Italiana, La scala & Tancredi, the Bologna forces have far greater weight and tonal depth. Thanks to Mariotti's careful and extremely clever balancing of the orchestral forces, there is little sacrifice in the way of clarity or rhythmic vitality. Almost the opposite in fact, with La scala taken at a similarly challenging tempo as both Marriner and Fischer; the approach of Mariotti is both far more deft and more imaginative. Mariotti is no doubt helped compared to Marriner in that he is using the latest critical editions that didn't exist when Marriner set down his accounts; there are a myriad of accents and phrasing that have been corrected and make much more sense and are less pedestrian than Marriner's. The comparative rarities share the same musical qualities from Mariotti and his Bologna players, with impeccable phrasing and pacing.

There are two "big" overtures featuring on this disc: William Tell and Semiramide. Semiramide is also performed by Fischer & his BFO; their account is perhaps more oil painting to Mariotti's watercolours - the interpretative touches here are integrated more subtly into the phrasing and, like comparisons with Marriner, Mariotti evokes a more naturally lyrical, operatic line to the phrasing while being equally transparent in textural terms. The timbre of the Bologna players is less conventionally central European, so may provoke the odd eyebrow raise on first listening - this quickly gives way to pure pleasure.

William Tell is given a very different performance to that of Battistoni, whose response is full-bloodied and making each climax work on its own account. Mariotti though is content to play a slightly longer game and seems to aim for one climax from each of the four sections. The most magical part of the performance is the treatment of the pastoral interlude between the storm (where Mariotti refuses to indulge in a war of attrition between the percussion section and the rest of the orchestra) and hunting music. Here, Mariotti manages to convince the listener that Rossini was both paying tribute to Beethoven's Pastoral symphony (premiered the year before) and that this music is a direct inspiration for Berlioz's Scènes aux champs in his Symphonie fantastique. There is one interpretative decision that takes a little getting used to: a near sotto-voce dynamic collapse before the final tutti with associated crescendo - some may prefer Battistoni's more conventional approach here.

The crowning glory of the set is the thrilling account of La gazza ladra; the sustained crescendo (a device for which Rossini was fêted for using) is marvellously well judged, replete with deliciously voiced woodwind solos and what must be close to a perfect rhythmic accompaniment from the strings. The handing over of instruments within motifs during these crescendos is a joy to the ear, as is the use of a pair of antiphonally placed snare drums. Importantly, Mariotti awards equal attention to the slower sections, granting them the same lyrical easy phrasing found throughout the rest of the disc.

The illuminating notes come from the noted Rossini scholar Emanuele Senici and the recording from Pentatone is as good as we've become accustomed to over the years; the decision to record outside of the opera house lends a natural halo to the sound that flatters the ear without deceiving it.

Thank you John for bringing this to my attention - I wouldn't have given it a second glance otherwise with Marriner, Pappano and Szell already on my shelves. But what a fantastic disc - terrific playing and recording with, as John says, equal care to the quiet music as to the big tunes. William Tell makes a suitable finale, and the opening section must be the most beautiful playing I have heard on disc for quite a while. I think this is almost certainly the best Rossini overtures disc I have listened to since the Decca Gamba in vinyl days, which fortunately received a fine JVD XRCD remaster a few years ago. Absolutely terrific - anyone hesitating really should not!

Glad you're enjoying it!