I was able to get a copy of this one, after a mixed impression from the redbook release for the full cycle I previously acquired. So, I made a comparative listening to the ... 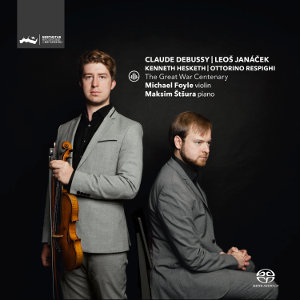 
‘Music expresses that which cannot be put into words and yet cannot remain silent’, wrote Victor Hugo in 1864. Half a century later, his words had never felt more pertinent. Every composer writing during World War I found a unique way, through their music, to describe and protest against the horrors that were tearing civilization apart.

Created in the depth of morbidity, Debussy’s parting musical gift is a subtle, dignified and heroic celebration of youth and joie de vivre. A sense of patriotism in the war years links Debussy with the foremost Moravian composer of the day, Leoš Janáček. Ottorino Respighi was only in his thirties when the war broke out. His 1917 Sonata for violin and piano is a work of Romance written in the time of hate, a reminder that the past and the future remain beacons of hope in desperate times.

Commissioned for this recital programme to reflect on the centenary of The Great War from our own times, Kenneth Hesketh’s Inscrizione, derivata, subtitled ‘A lie to the Dying’, is a quasi-meditation on the dying man, his anxious thoughts and the spasms of his failing heart being weaved conspicuously into a narrative of disquieting melancholy.

A hundred years ago one of the most destructive wars in Europe ended without solving the underlying socio-economic problems. During ‘The Great War’, many reflected on how to express their feelings. Michael Foyle (violin) and Maksim Štšura (piano) collected three violin sonatas written during those years, complementing it with ‘A Lie to the Dying’ recently written for this duo. Not all sonatas are equally expressive. The liner notes describe in detail the facts and the thoughts behind the title. In my view the most emotionally laden is Janáček’s Violin Sonata JW VII/7, written in 1914, although repeated revisions took it to publication of a final version in 1921.

It amazes me time and again that so much talent is available. And we owe it to independent labels like Challenge Classics that we get to know them instead of constantly having to sit in a carousel of limited numbers of acknowledged ‘names’ to satisfy our hunger for classical music. Of course, the violinist, Michael Foyle, has already established himself in The Netherlands after having won a prestigious Dutch violin competition. And naturally also on his home turf, the United Kingdom. Elsewhere, so it seems to me, his growing and glowing star is still kept under wraps. Well, here he is: Beautiful tone (1750 Genaro Gagliano violin on loan), compelling agility and persuasive presentation, those are some of his hallmarks.

I do not know for how long Michael Foyle has been partnered with pianist Maksim Štšura (in any case since 2015), but in a short time span their teamwork has become impeccable. Both shifting so admirably from one musical idiom (French: Debussy) to another (Czech: Janáček) and yet two more totally different ones (Italian: Respighi; British: Hesketh). How much better would you like to have it?

After all this praise I think I’ll be excused of some criticism. It’s the photo on the cover. It may be in line with the seriousness of the programme, but I would hope that in reality their faces look less stern and possibly in the same direction or towards one another.