Chosen as BBC Music journal as 2020 Orchestral Recording of the year.. Quote:- 'John Wilson has reformed the Sinfonia of London, and, boy, does it sound good. There’s ... 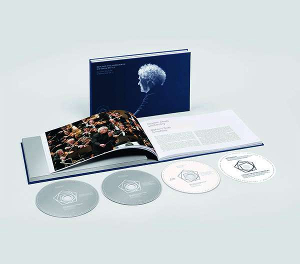 
The end of an era and a musical highlight: Simon Rattle’s farewell as chief conductor of the Berliner Philharmoniker with Gustav Mahler’s stunning Sixth Symphony was given a standing ovation by the audience. In a high-quality edition you can relive this special moment on CD and Blu-ray. There is also an audio recording of Sir Simon’s Philharmoniker debut conducting the same work, a documentary about his tenure, and an extensive companion book with many articles and photos.

On 14 November 1987, the young Simon Rattle first took to the conductor’s podium of the Berliner Philharmoniker. “I had the feeling that I would find my voice that day,” says Rattle in retrospect. At the same time, the young conductor demonstrated his total mastery of this vast work with its brutal eruptions.

The fact that Mahler’s work was also part of this farewell concert had a symbolic as well as a musical dimension: it brought both a circle to a close and also a great chapter in the history of the Berliner Philharmoniker to an end. At the same time, the performance reminded us that performances of Mahler’s music marked highlights of the Rattle era on numerous occasions. The tumultuous applause expressed not only enthusiasm for a uniquely intense, multi-faceted performance but also gratitude for 16 fulfilling years.

A fascinating document that charts the beginning of Sir Simon's relationship with the Berliner Philharmoniker and his departure as chief conductor, almost 30 years apart, in the same work by Gustav Mahler.

This totemic work of Mahler's was Rattle's chosen opening gambit with the Berliner's; perhaps rather a bold gamble given that this was one of the few symphonies by Mahler that their then music director conducted. But it paid off handsomely for Rattle and, arguably, the orchestra and their respective devotees. Listening now to that concert of 15 November 1987, one is struck by how Rattle is more akin to the stereotype with which he has latterly been portrayed: sudden speed changes, "point making" that interrupts the musical flow and so on. It must also be said that throughout the score, Rattle approaches the kaleidoscope of sound from the perspective of C21 modernism - even in the cataclysmic tutti's that overwhelm audiences to this day, the fire of the radical and new permeates the vision he requests and gets from the Berliners.

Despite the odd slip of ensemble or intonation, which given the interpretation and work is admirable in its own right, this is not surface thrill-seeking from Rattle. The orchestra is audibly reacting to Rattle with a positive mixture of entrancement and excitement. Some of the interpretative choices probably rule this out as a "library choice" but one can understand the enthusiasm that greeted this collaboration, coming as it did towards the end of a particularly trying musical period for the orchestra. It is quite remarkable how much the tonal palette of Karajan's orchestra is transformed, almost beyond recognition. Then though, in the Andante (performed second in both concerts), and in the "Alma motiv" dotted throughout the symphony, this is allowed to spread its wings - the effect of this is glorious, if not a little unsettling (probably intentionally so by both Mahler & Rattle). Throughout, the younger Rattle is a little more urgent but mercifully never rushes any of the great climaxes. The final coda is, perhaps to pull the rug from underneath the listeners feet, almost underplayed in terms of point-making when compared to all that prefaces it.

The sound of the 1987 performance has been lovingly mastered to make the best of the analogue recording that (now) Rundfunk Berlin-Brandenburg made, albeit in 48kHz stereo. Despite the obviously more dated sound, the performance burns brightly and many of the details to be heard in the much more technologically advanced recording of Rattle's farewell are audible here too once the ear adapts. What is regrettable is that there is very little (if any) repose granted the final pizzicato thud of "mud on the musical coffin" before the disc comes, unceremoniously, to a halt - a few more seconds would have been hugely appreciated.

Opening the disc is the performance of 20 June 2018, where Rattle and the Philharmoniker officially parted company. Roughly 20 musicians of the Philharmoniker remain from the time of the first performance with Rattle in 1987 (not all necessarily played though); a nice touch would have been to present the 1987 roster of musicians as well as the 2018 - presumably this has been lost in the mists of time. This 2018 performance is Rattle at his most direct - the only times ones ears are drawn to a detail, they are firmly placed within in a well thought through musical context and argument. The result is almost all pure gain with another key departure from the 1987 performance (no mention is made about it in the sparse accompanying notes) is that the violins are now - rightfully - antiphonally placed.

The Andante flows wonderfully, not too quickly to skate over the pools of doubt that well up from beneath the surface, not too slow to turn it into a premonition of the 9th symphony as Karajan seemed to view it. The movements either side are dispatched in a way that makes their almost incoherent mood changes seem natural without ever reducing the impact of the rapid fluctuations of the emotional temperature. The last most noticeable change of the 2018 performance is that Rattle is now apparently content for the sound world to be viewed from a more turn-of-the-century perspective, with at least as much focus on looking back to the orchestral glories of Wagner, Bruckner & Strauss as to the "modernist" sound favoured in the earlier performance. Having built a rapport together, the ensemble and intonation are now also far more secure than before and although some may be a little disappointed that the hammer blows are not a "sonic spectacular", they are in keeping with everything around them. In the very end of the coda, Rattle extracts the maximum tension from the brass chorale, encouraging one to holds ones breath waiting for the final release. Here, at last on a Berliner Philharmoniker recording, the dynamic collapses, the orchestra speaks only to themselves but the sound world is intact: the last climax is overwhelming.

For all the constant carping from critics over the years (decades?) that the Berliner's "don't sound as good as they used to under [insert former music director of choice here]", this more-or-less completely refutes such thoughts. The depth and variety of sonority that this great orchestra can deploy has rarely, if ever, been captured so uncannily on disc: this is the first time that one is convinced that the orchestra & Philharmonie are in complete harmony. Absolutely no allowance needs to be made for the acoustic or the level of orchestral detail proffered; this is simply the finest recording (from at least a technical perspective) made of this orchestra and conductor together. The earlier Mahler: Symphony No. 6 - Abbado picked up a great many plaudits and deservedly so but from a sonic perspective, this leaves Abbado's fine account in the shade. As already alluded to, the notes are rather less all encompassing than usual from the Berliner's; there is a visual snapshot of Rattle's time with the orchestra in (partial) compensation.