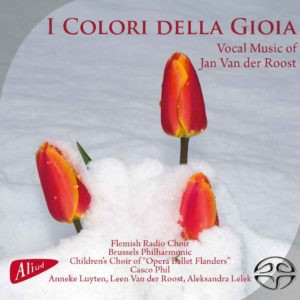 
"Although I am especially known for my instrumental compositions, I have always loved vocal music as well. This CD displays a nice variety of music for voices and contains no less than six “first recordings.” The three first works are for mixed choir, with orchestra, organ and piano respectively and they feature the “Flemish Radio Choir”. Soprano Anneke Luyten shines in the last three works, accompanied by chamber orchestra or a special chamber music combination. Encapsulated by those 6 pieces of music you’ll find a short a capella piece for children’s choir.
“Il Bucaneve” means “the snowdrop” and the text tells the story of a little flower, piercing itself through the snow to see the early spring sun. This is symbolic for any artistic process: a simple idea (or cell) develops into something greater. A related image can be seen on the cover photo, made by Luca Artioli. Luca Artioli also wrote the texts of “I Colori della Gioia” (“The Colors Of Joy”), the aria that gave this CD its name."
Jan Van der Roost

When I received this attractive SACD from Aliud Records, I set down to listen before looking at the disc's information. It carries a very bright and colourful set of mainly new short pieces, varying in their topic and textually arranged very well in the whole sequence, with a wide mixture of singing, full or chamber orchestra, harp, piano and organ chamber orchestra. The excellent playing of every musician in the new pieces made me really happy and I wanted to understand more of how it came about it. For this, we need the instigator of this piece:

Jan Van der Roost was born in Duffel, Belgium, in 1956. At a very young age he was introduced to the prominent names in the concert band, fanfare band and brass band repertoire which inspired him to put something on paper himself. He studied trombone, music history and musical education at the Lemmens Instituut in Leuven (Louvain). He continued his studies at the Royal Conservatoires of Ghent and Antwerp, where he qualified as a conductor and a composer.

Jan Van der Roost currently teaches at the Lemmensinstituut in Leuven (Belgium), is special visiting professor at the Shobi Institute of Music in Tokyo, guest professor at the Nagoya University of Art and guest professor at Senzoku Gakuen in Kawasaki (Japan). Besides being a prolific composer he is also very much in demand as an adjudicator, lecturer, holder of clinics and guest conductor. His musical activities have taken place in more than 45 countries in four continents and his compositions have been performed and recorded around the world.
(https://www.janvanderroost.com/en/biography/)

The booklet carries all 11 compositions which are introduced and explained by Jan Van der Roost himself. For example, der Roost tells us that "Il Bucaneve” means “the snowdrop” and the text tells the story of a little flower, piercing itself through the snow to see the early spring sun. A related image can be seen on the cover photo, made by Luca Artioli. Luca Artioli also wrote the texts of “I Colori della Gioia” (“The Colours Of Joy”), the aria that gave this CD its name. "I Colori Della Gioia", Italian title on this SACD (in English "Colours of Joy") refers to the disc's front cover, and there are the three handsome Tulip plants in shades of red and yellow, emerging from snow. Music and Biology - this is interesting!

Overall, Jan Van der Roost is a very well known Flemish composer, especially for his instrumental composition, and also has loves vocal music. In this disc he has combined various instrumental and vocal music which are broadly Romantic. The three first works are for mixed choir, with orchestra, organ and piano respectively and they also feature the Flemish Radio Choir. Soprano Anneke Luyten shines in the last three works, accompanied by chamber orchestra or a special chamber music combination. Encapsulated by those 6 pieces of music is a short 'a capella' piece for children’s choir.

When you remember that all "I Colort Della Gioia" requires many workers to complete this SACD, with very complex work, such as arranging of the musical works, and much production, of which the setting up Recording Locations was important, from Alten Chapel (Kentech), Brussels Opera House, Jesuits Chapel, Flagey Studio 4 - Brussels and the Protestant Church. Each of the 11 sections on the tracks had to set up audially in each one. This was under the well-known Producer - Jos Boerland. Engineer - Jos Boerland with Jelmer Veenstra. Jan Van der Roost had several attendants as Musical Supervisor. Sonics not only give the required reverberation of the various space in each track, but very clearly follows such as small organs, various generally soft
percussion, harp, solo cello etc. Not to miss the singers, all of each is excellent!
Production of Aliud Records:
Quality:DXD 64fs / 128f / 256fs (78’22”)
Channels: Binaural Stereo Multi Stereo+MultiChannel

This is a disc that I will certainly listen to often, and here are some words that came to me when I first heard it: cheerful, focussed, lyricism, energetic, passionate, perfect balancing, carefree, purity of tone, deeply rewarding music... And just enjoy it one yourself!