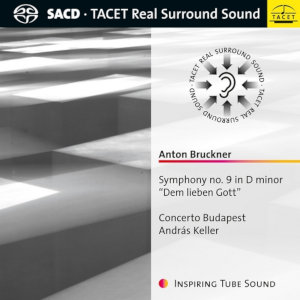 
All of us often hear too many words and promises. Sometimes even by those who are serious. Beware! Again somebody praises a recording of Bruckner 9. - The last Bruckner symphony talks about grandeur and nullity, about self-doubt and certainty, about life and death. Every listener has to find out on his own if András Keller and his musicians convey the message trustworthily. They tried honestly, that was obvious in every minute of these 5 recording days.

What could have been a fascinating experiment in presenting this material in a unique surround sound recording is undermined by the low emotional voltage of the account.

The scherzo & trio fares better but in the opening scherzo the mood is almost completely without any sense of negative emotional response at all. The trio being as fleet as foot as one would wish for Mendelssohn would normally be worthy of praise but there is so little emotional contrast from the Trio that it damns the music making surrounding it. The concluding Adagio is similarly shawn of passion or musical "bite" that the music sounds like Bruckner was charting someone falling asleep rather than contemplating something altogether more existential. That great clash of tonalities raises little more than the volume & the final figurations for the violins are so quiet that they barely register - the subliminal pulse that all great Brucknerians evince is missing and so, without it, the music dies instead of conveying the transcendental experience that it can offer in other hands.

The sound, however, is exceptional and, together with Ravel: La valse, Ma mère l'Oye, Tzigane, Boléro, Pavane - Rizzi, is the most convincing orchestral palette from Tacet that is distributed around the listener.

Sadly not recommendable to anyone except the most devoted of fans to Tacet's avant-garde approach to surround sound.