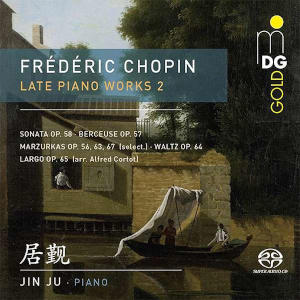 Sonata Sensation
Chopin’s third Piano Sonata, an enigmatic and gigantic work eschewing everything normally associated with a sonata forms the centerpiece. It instead has episodes of nocturne character, extended static harmonic expanses, and ballads of fairy tale magic that Jin Ju knows how to narrate with great intensity.

Mazurka Marvels
The many little pieces, above all the mazurkas, only seemingly form a contrast to this work. Plain and simple on the surface, these sometimes very short miniatures reveal an entire cosmos of associations. This is hardly surprising: Chopin’s extant sketchbooks show with what great precision he worked on these pieces during the last years of his life.

Dressed for Success
The Largo from the Cello Sonata, Chopin’s last finished composition, is an interesting rarity, and Jin Ju plays it in a version for piano solo by Alfred Cortot, whose standard-setting Chopin interpretations have influenced generations of pianists and music enthusiasts. The perfectly maintained “Manfred Bürki” Steinway concert grand piano and the recording technology are on the same high level as the loving selection and performance: this high-resolution, three dimensional Super Audio CD is dressed for success – let’s party! 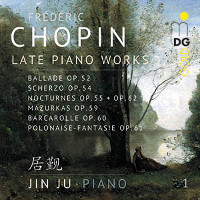