Dissonance, Yes, thanks very much for that. 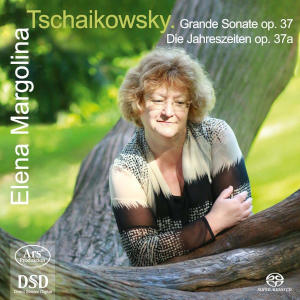 Tchaikovsky: The Seasons (with recitation of poems), Grand Sonata

This is Elena Margolina’s second solo album in Super Audio (though many more in RBCD) released by ARS Produktion and it is every bit as attractive as the previous one (Schubert: Piano Sonata No. 18, 3 Klavierstucke - Margolina). For me Margolina is someone having a natural feeling for and understanding of a composer’s underlying meaning. It is a gift not bestowed on each and every pianist, however good she or he may be.

In her reading of Tchaikovsky’s Piano Sonata she manages to make the listener hear it from the inside. This is, for several reasons, by no means obvious. Firstly, because the Sonata is not an ‘easy’ one. Neither for the interpreter nor for the listener. Secondly, in spite of his popular first Piano Concerto, composing for the piano was not exactly Tchaikovsky’s preferred pastime. In its original form his ‘Grande Sonate’ suffered from several technical shortcomings. In fact, the dedicatee, Karl Klindworth, took the liberty (authorized by Tchaikovsky) to make some changes, though even in this ‘revised’ form - as played here - many will be happy having been able to convey the score without stumbling over its various hurdles. To get to the heart of it, it needs someone who doesn’t solely go for showing off, but, instead, someone who is able to dig deeper. Margolina’s pianistic virtues are so natural that one doesn’t even notice any of the interpretational difficulties, giving her plenty of room to expose the intrinsic musical values hidden by: “A soul full of yearning and love for his homeland – that is the Tchaikovsky I know”. She opens the door for any serious listener.

There are other notable recordings of this sonata worth listening to, but apart from Margolina’s typical, determined and personal approach, which I like very much, there is something else that might inspire readers to opt for this (double!) disc: The calendar cycle ‘The Seasons’. These character pieces were commissioned by the publisher of a monthly music journal ’Nuvellist’, Nikolay Bernard, accompanied by twelve citations of the Russian poets Pushkin, Nekrasov, Maykov and Fet for each month of the year. Unlike most or even any other recording it is interpreted here in full. That is to say: juxtaposing music and text. A brilliant idea. The only other recording that I know of is a version for orchestra, with David Geringas conducting and his brother Alexander reciting, for the EBS Label

Some purists might say that reciting the epigraphs in between the 12 short pieces is disturbing and that on top of that Russian is not anyone’s language. I believe, however, that such remarks are beside the point if accepting and recognizing that speech is another kind of music. Certainly if done well with proper declamation, good pronunciation, articulation, rhythm and tonal voice changes; something which the Russian language lends itself very well for. And that’s exactly what Margolina’s partner, the narrator Boris Hait, does. Those having difficulty understanding Russian will find a translation in the booklet, but… in German only!

Bernard’s idea served no doubt a commercial purpose and needed therefore being scored with the average experimented amateur pianist in mind. So it does, though it is widely understood that Tchaikovsky was not altogether happy with it, instructing his servant to remind him each month to write another ‘easy and trivial’ piece. However, these pieces are not trivial at all. A popular German saying goes as follows: ‘In der Beschränkung zeigt sich erst der Meister’, meaning something like ‘the true art is knowing how to set limits’. Indeed, the complete set of monthly scores represent a rare combination of charm, wit, playfulness, longing and sentimentalism, according to month and text; a combination of laugh and tear, a door to which, notably, Slavic interpreters, like Margolina, seem to have the key. She does it with flair, elegance and proper understanding.

As I see it: It is not so much her ambition to impress, Elena Margilina is first and foremost an interpreter of emotion.