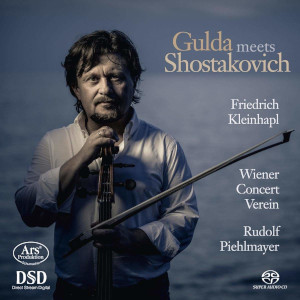 According to Music and Theatre Agents, Josef Weinberger Ltd: "The invigoratingly outrageous Cello Concerto for cello and wind band (written for Heinrich Schiff) has been performed most widely in recent years, particularly in Scandinavia and Holland". For those unfamiliar with this concerto it is now available for all of us, and what’s more: in high resolution, recorded under the supervision of ARS Produktion and played by Gulda's Austrian compatriot Friedrich Kleinhapl.

Is it outrageous? Certainly. In the 19-eighties many things were, and readily accepted, too: “It was the decade of big hair, big phones, pastel suits, Cabbage Patch Kids, Rubik’s cubes, Yuppies, Air Jordans, shoulder pads and Pac Man. More importantly it was an era of iconic moments that changed the world” (says James Mitchell in ‘The 10 defining moments of the 1980s’). So, when Gulda’s cello concerto was played for the first time by the dedicatee, Andras Schiff, its reception was positive and welcomed by audience and musicians alike (Schiff: "Ich war glücklich und Gulda vielleicht etwas überrascht“- I was happy and Gulda possibly somewhat surprised). Now that the dust has settled I suppose that, in retrospect, some might see it as a bit of crossover gimmick in the spirit of the time: A mixture of jazz, sweet honey, Austrian mountain and village band marching tunes.

For a correct understanding let me add that for those who don’t know the composer, Friedrich Gulda, was an eminently gifted but, as the years went by, also a thoroughly anti-establishment pianist, who would show up for a concert in eccentric clothing or none at all! And so is this cello concerto: some will run away with it and others from it. Looks like a matter of like or loathe, leaving it to today’s listener to decide. Whatever the final choice, one would have to listen to it at least once to know what it is about.

For this recording Kleinhapl is expertly surrounded by members of the 'Wiener Concert Verein' (the original name of the Vienna Symphony Orchestra) founded in 1987 by younger musicians of the 'Wiener Symphoniker'. And not just wind instruments as mentioned in the title (Blasorchester). I’ve also spotted a guitar and a double bass, part of the jazzy elements. With these musicians the quality of the musical support is guaranteed. The soloist does, indeed, need such a supportive underpinning as he faces a very difficult first movement, to be played without vibrato and having to negotiate fast jazzy rhythms plentiful of pitfalls. Kleinhapl does it all. Better still, the third movement is a 5:57 minutes cadenza during which the cello shines with all the acrobatics its master can put on display.

In this recording one is surrounded by the orchestra. I'm admittedly not a great fan of listening in such 'full surround'. Moreover, the soloist is placed so prominently in the middle of the soundstage that I couldn’t quite make out where he was sitting. On the other hand, it does create an immersive ambiance, which, I'm sure, will please a wanting crowd. However, for those who’d like to sit in the audience rather than in the music I recommend that they leave their preferred seat, placing themselves closer to the front speakers. Stereo listeners will miss out on this extrovert ambiance and some might even be glad for it.

And what about meeting Shostakovich as the title suggests? Although being contemporaries, they never did. It’s more spiritual, a matter of similarities, but in an opposing manner: In his liner notes, Kleinhapl sees both characters as 'antipodes' having in common the "mocking challenge to the conservative-serious character of the classical concert attitude" (in the words of Shostakovich). Where Gulda is as clearly outspoken as Shostakovich, the latter taking the establishment not openly, but implicitly by the nose.

For this meet-up Kleinhapl has chosen, in an arrangement from Alexander Wagendristel entitled 'Suites for violoncello and Wind Orchestra', a selection of Shostakovich’s quite listenable and lovingly played dance pieces, taken from his Jazz and Ballet Suites, together with film music from 'The Gadfly'. Here, too, the cello is prominently placed in the middle with the same orchestra around.

What was your verdict Adrian?

Good question, John. I think you will be able to read in between the lines. The musicians do a good job and so does the soloist, and if you are a cross-over fan and, indeed, do like Gulda’s cello concerto, than this is a pristine choice. The Shostakovich’ tidbits are nice, well played, but, I think, not the main item for consideration. For non-mc listeners like you, I added stars for stereo.

I briefly listened to this music online (an older Ars Production) and must say; "not to my taste". What is to my taste? Well among other things more or less 20th century or contemporary, I love the Martinu and Shostakovitch cello concerti and was ever so moved by Peteris Vasks concerto #2 "Presence" commissioned by Sol Gabetta, when I heard it at the Gstaad Menuhin Festival last summer. That was so other-worldly beautiful, neither my wife nor I could bring ourselves to remain after intermission to hear the rest of the concert and pollute our memory of Vasks' supremely beautiful work.

This Gulda, however, I am sorry, I just can not bring myself to listen more in this unfortunate vein.

As a matter of fact I thoroughly enjoyed the samples at jpc.de.

And the promise of true surround sound placing me in the middle of the performance is a massive bonus.

I wish all releases used true surround rather than the rather lacking ambiance. I believe that it gives a very much more accurate portrayal of the music and is dramatically more satisfying to listen to.

This disc is utterly SUPERB!

ARS Produktion have excelled themselves. Probably the best classical disc that I have ever heard - it kept me spellbound from the first note to the last with never a dull moment inbetween.

Wonderful material, magnificent performance, magnificent recording, and with a magnificent surround mix that is entirely appropriate for the programme. One is right in there with the musicians. Tonally gorgeous. Stunningly realistic - the violoncello could be right there in front of you.

I've not knowingly heard anything by either composer before. There couldn't be a better introduction.

Hi Oxenholme,
Glad to know that you like it so much. As I told John “if you are a cross-over fan and, indeed, do like Gulda’s cello concerto, than this is a pristine choice”. Lucky you to get an advance copy. What kind of music do you normally listen to?

It was a very pleasant surprise to receive so early the disc that I had ordered from jpc.de.

And much of that which comes out on ARS Produktion - most of it is completely new to me.

I've no idea what you mean by Crossover - I'm just an out and out music lover.

But I must take you to task regarding your measly 3.5 star rating for the 5.1 surround mix on this release. It's no more immersive than the 5.1 mix of the Franz Krommer - and you didn't seem to have any problems with that. I wouldn't give even 2 stars for the halfway down the concert hall ambience mixes of the majority of classical music releases. I find them distinctly lacking.

I would love to hear Le Sacre du Printemps in full blown surround sound with the orchestra filling the whole room and the listener smack dab in the middle.