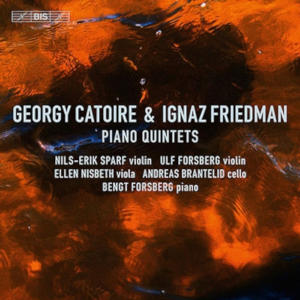 New and little known chamber music, but not for long. BIS does it again.

Who knows Georgy Catoire? Collectors of rare romantic piano concerti may have heard of him. But I don’t think that the average lover of classical music is familiar with his compositions, not even his melodious and inoffensive late romantic symphony in C available on the DUTTON EPOCH label; thoroughly Russian ‘as they like it’. However, members and regular visitors of this site may be aware of another recording of Catoire’s Piano Quintet from Aliud Catoire: Chamber Works, but its reception was rather mitigated. And what to think of Ignaz Friedman? Not a familiar name either. A great pianist of the past and, judging by his Piano Quintet, an accomplished composer as well. As far as I know, one other recording is available, but unfortunately only in RBCD (Hyperion). All the more reason to welcome this new BIS release.

Some will tell you that piano quintets are few. Following Schumann’s example (piano and strings) the format gained popularity in the second half of the nineteenth century, with Schubert, Brahms and Dvorak as major proponents. In the first half of the twentieth century this combination found further acceptance by ia. Franck, Fauré and Elgar as "a somewhat conservative profile, far from major developments" in musical expression. Was that it? Not at all.

With this recording BIS prove these savvies wrong. And further research reveals that there are, indeed, far more piano quintets than one would have expected. A possible explanation is that many, though certainly not all, were written by composers having long remained - and some still are - under the radar of popularity. Whatever the reason and whatever further development may follow, we have here another element for being grateful to BIS and chamber players actively sniffing out music literature for forgotten gems.

Now what about these two? I’m of the opinion that if the composition is good, the musicians are good and the recording engineers are good, the result must be good.

Without pretending that these piano quintets are the best ever written, listening to them makes abundantly clear that they are works of a serious and well-constructed nature, each in three movements. I’m not sure if that was, indeed, its main purpose, or that they were meant for divertissement of the highest order, serving an educated audience. Whatever the objective, it would seem to me that they are by no means salon pieces of “a somewhat conservative profile”. That’s the first ‘good’ point.

Second ‘good’ point: the interpreters have all earned their salt. Bengt Forsberg, as piano partner of Sophie von Otter; the violinists, Nils-Erik Sparf, leader of the famous Swedish Drottningholm Baroque Ensemble and Ulf Forsberg, ia. Member of the Chamber Orchestra of Europe; Ellen Nisbeth, (viola) whom I came to know as ‘a revelation’ in another BIS recording Let Beauty Awake - Nisbeth / Forsberg; and the violoncellist, Andreas Brantelid, winning the 2006 the Eurovision Young Musicians contest, and all of them playing regularly together.

As for the third ‘good’ requirement: The sound, I can be brief as this is, as widely known, of the proven BIS (take5) quality.

Friedman (Dohnanyi style) is more modern than Catoire (Fauré style), but still within the limits of melodious listening. The liner notes give all the details one could possibly wish for in order to getting to know better these composers and their quintets and the interpreters. Do I have to say more? Why not try it out.