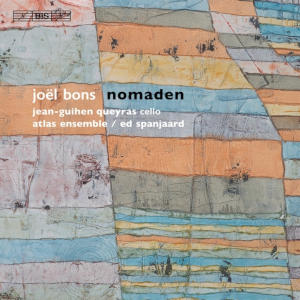 
In the words of composer Joël Bons, ‘Nomaden is like a journey during which the protagonist – cellist Jean-Guihen Queyras – “meets” musicians from different traditions and enters into dialogue with them. It is not a cello concerto as such, but rather a concertante work for cello and soloists from other cultures.’ With a playing time of roughly an hour, Nomaden (‘Nomads’) is made up of 38 brief sections, most of which run into each other without any pause. Two types of musical material run like a thread through the work: the ‘Nomad-music’ which return eight times but always presented each time in a different light, and the so called ‘Passages’: static episodes on one or two tones (or a chord) that explore the various instrumental timbres. These lead into the various ‘main’ episodes featuring encounters between the cello and the instruments from other cultures.

Bons composed Nomaden work for Queyras and the Atlas Ensemble – a group he himself founded in 2002, made up of 18 eminent musicians from China, Japan, Central Asia, the Middle East and Europe. From the Japanese shakuhachi and Chinese erhu to the Armenian duduk and the Persian setar, the scoring offers an untold number of combinations and an unheard spectrum of timbres. Nomaden was premiered by these performers in 2016, under the baton of Ed Spanjaard, and has been awarded the prestigious 2019 Grawemeyer Award for Music Composition.

Recorded on 28th October 2016 (première performance) with an additional session on 5th November 2016 at the Amsterdam Muziekgebouw, Amsterdam, the Netherlands, 24/96

The composer would like to thank Jean-Guihen Queyras, Ed Spanjaard, the musicians of the Atlas Ensemble, Johan Dorrestein and Josepha Hulskes for their inspiration and support.

This recording was made possible with financial support from Stichting Nieuw Ensemble and Sena Performers Muziekproductiefonds.
Works (1)

In this present era of profound distrust and strife among people of different cultures, a work of music can, for the space of an hour, thread together the human tapestry that has unravelled.

Dutch composer Joël Bons received the 2019 Grawemeyer Award for Music Composition for “Nomaden,” an hour-long work featuring cello soloist Jean-Guihen Queyras and members of the Atlas Ensemble. Bons founded Atlas Ensemble in 2002 as a framework to perform with musicians from across Asia and the Near and Middle East, and to expand the boundaries of Western classical and new music conservatory studies and practice in the annual Atlas Lab.

About "Nomaden" composer Bons states: "I imagined an unlimited potential of combinations and an unheard spectrum of timbres."

In this outstanding audiophile recording, the bold juxtaposition of Western and Eastern instruments, in smaller and larger groupings of players and sequences of brief musical segments, paints a vivid, cross-cultural sonic panorama. The participation of acclaimed cellist Jean-Guihen Queyras, who has a wide-ranging interest and discography in concerto repertoire, chamber performance, and early music, offers a point of focus to this innovative offering of new classical music.

A glance at the 38 segments in this sixty-minute piece might suggest that the composition is highly fragmentary. But the eleven brief 'passages' function both as 'breaths' between longer segments, and openings and transitions into longer groupings of segments. When a 'passage' ends in extended silence, the preceding section can be understood as complete; and when a 'passage' continues across the track break into the following segment, it has the effect of an introduction or continuation.

The grouping of segments 2-6 can be heard as a coherent movement grounded on a motive played by the solo cello in Nomaden 1 that is developed in variations and answers by the other instruments in subsequent segments. This coalescence of small segments into cohesive movements is guided by conductor Ed Spanjaard, who has a long history of collaboration with the Atlas Ensemble.

If you listen to the whole work in this way, "Nomaden" reveals an integral underlying structure. In the longer segments, Bons often places the non-Western 'folk' instrument in the first-chair position: for the grouping Passage 6 - Nomaden 5 - Erhu, Zhao Yuanchun's erhu, a Chinese two-stringed instrument, takes the place of the first violin in a string quartet setting. The effect of this placement might be more transparent in concert, where the audience can see as well as hear the musicians. It serves as a reminder of the musical instrument forms, sounds and traditions that developed and flourished outside the narrow confines of Western classical music. Having only heard the erhu played by elderly Chinese musicians on the noisy streets of San Francisco's Chinatown, I found Yuanchun's eloquent performance, and the context in which Bons places her instrument, to be illuminating.

Another grouping, tracks 27-30, begins with a dancelike trio conversation among the cello, clarinet and viola that is gradually displaced by the non-Western players, proceeds through a bravura display by tar soloist Elcin Nagijev, and 'descends' into a seemingly chaotic chorus of sawing strings. In the unaccompanied cello piece "Scello", Queyras essays a furious passage that is taken up by the bass clarinet at the beginning of the following segment "Dopo Scello"; the fury dies away in the plaintive, fragile high notes of Chinese and Japanese wind instruments, sheng and sho. Bons has the instincts of a high-wire aerialist, and the exhillarating results justify the risk-taking.

The October 28 premiere performance and an additional session on November 5, 2016, were recorded in 24/96 by engineer Guido Tichelman, using DPA and custom-built Azazello microphones. The vivid sonic image will convey the ambience of the concert hall in multichannel SACD installations, and offer a more intimate experience to those who prefer listening to hi-res downloads in headphones. The booklet and liner notes credited collectively to Atlas Ensemble are useful in following the logic of the composition.

Those who are curious about this adventurous music can see as well as hear the instruments by visiting Atlas Ensemble's YouTube site: