Is it possible for a recording to be too good? I was really impressed when I first listened to this SACD. The sound is delightful for its detail, texture and dimensionality. ...

A very interesting perspective Tony. Not sure where I would go on the subject. Perhaps there is no such thing as perfection in recording or otherwise. We should just try to ...

Yes, a very interesting comment, Tony Reif. Though, reading what you say about some of the other recordings you own, I'm inclined to think that the "problem" (the quotation ...

Tchaikovsky: Symphony No. 4, Mussorgsky: Pictures at an Exhibition - Noseda 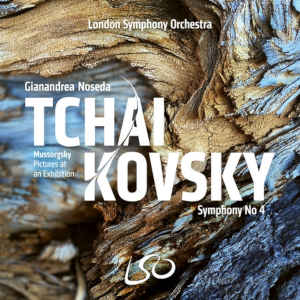 Tchaikovsky: Symphony No. 4
Mussorgsky: Pictures at an Exhibition


Tchaikovsky’s emotionally-charged Fourth Symphony was composed during a time of great personal strife, leading him to move away from the traditional symphonic form and write music driven by a more human narrative – dramatic, intense, and even autobiographical. Mussorgsky’s Pictures at an Exhibition (orchestrated by Ravel) presents a rather more “pedestrian” journey; that of a viewer walking through an exhibition of characterful works by the painter Victor Hartmann.

Widely recognised as one of the leading conductors of his generation, LSO Principal Guest Conductor Gianandrea Noseda presents a work of concentrated emotional intensity in the first of a new series exploring Tchaikovsky’s final three symphonies.

Urgent, supercharged and violent in places, Tchaikovsky’s Fourth is said to reflect the turmoil he found himself in while composing: a disastrous marriage, struggles with his sexuality and severe depression. Yet, despite the gloomy outlook, the symphony proves undoubtedly that Tchaikovsky knew how to fill his works with memorable melodies.

Known for his mastery of Russian repertoire, for this album Noseda pairs Tchaikovsky with a masterpiece by his fellow countryman, Mussorgsky’s Pictures at an Exhibition, performed here in Ravel’s iconic orchestration.

Interesting release but no SSR again, is he still contracted to DG? Several earlier LSO Live releases have been under his baton so for me at least a slight puzzle. Can LSO enlighten us please?

SSR ? Are you referring to Rattle ?

Hi Bruce, Yes, that is how he is known affectionately around these parts.

I listened to the Tchaikovsky 4th here and...I'm not sure I recall hearing a more bloodless recording of this work. He's got the LSO brass, but it's like they are all high. Typically Noseda is one of the most "aggressive" conductors out there. There was a live Mahler 5th I heard him do in NYC that was awful because he started it at a 10 and there was nowhere to go, so it was 75 mins of being bashed in the head. This Tchaikovsky 4th is the opposite. I'm waiting to be hit over the head and all I get is cotton candy shoved in my face.